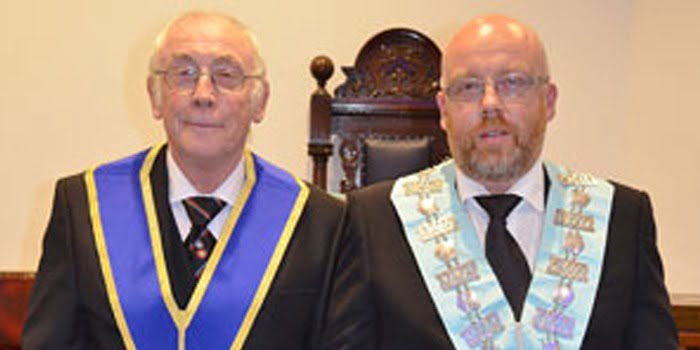 The general lodge business having been efficiently convened by the acting WM Brian Warrington, there then came an expected knock on the door whereas the Provincial Grand Director of Ceremonies requested admission. Keith entered the lodge room and announced that the Provincial Grand Master stood without and demanded admission, where with much delight to the members and visitors alike, Tony entered the lodge room in ceremonial procession accompanied by his entourage of grand and acting Provincial grand officers. 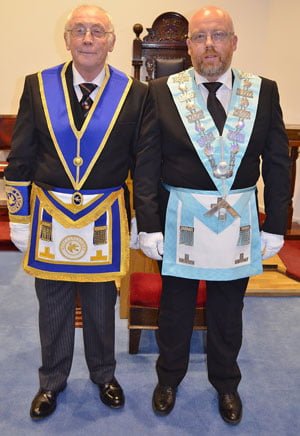 Father and son, Brian and Simon.

Tony, having been introduced and seated was promptly offered the gavel of the lodge by Brian, there was a slight hint that Brian would have been most pleased to have handed it over, but Tony was of course ensured that Brian, under good authority learnt that Brian and his team had perfected their ceremonial standard by practice and much preferred to see their ceremony from his own seated position, Brian, in humour, replied: “No pressure then.”

But Tony was aware of course that this was a rather special or even unique occasion for Brian, because the master elect for the ensuing year was his son, Simon Warrington. Brian, a member of Torrisholme Lodge No 5245, had in fact taken the master’s position on previous occasions to complete Simon’s initiation, passing and raising ceremonies and had travelled from Morecambe to carry out Simon’s installation ceremony.

The lodge officers who were present having been invested, Jim Noble continued with an address to the master and John Lee gave the address to the junior warden and finally, Tony presented a most heartfelt and well received address to the brethren of the lodge.

On completion of the ceremony, Tony rose and gave his congratulations and good wishes to Simon for a happy, healthy and enjoyable year, Tony said he had witnessed a wonderful ceremony that was a delight to be present at and congratulated Brian for his work throughout the evening and similarly congratulated the officers of the lodge in taking their respective positions in supporting the lodge. Tony concluded by offering his congratulation to Sam Wood for his presentation of the third degree working tools. 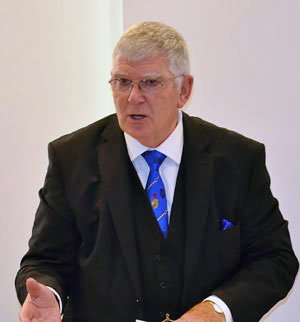 Tony responding to his toast.

During the festive board, Tony gave an excellent response to his toast, where he initially introduced the provincial team present with him and thanked them for their support, Tony expressed his awareness in that the South Eastern Group were most fortunate in having Mike Adams as their group chairman ably assisted by his group vice chairman and Royal Arch lead David Durling, group secretary Peter Beswick and the various appointed officers working together and producing a very well ran group within the province.

Tony gave his personal congratulations to Simon saying it was a delight to be in attendance at the meeting and to see his father, Brian, do such excellent workings in the lodge. Tony also congratulated those members who had taken a part in the ceremony, saying he thoroughly enjoyed the installation meeting.

Sporting his new Provincial Masonic tie, which are available to purchase and wear, Tony continued by making reference to a number of subjects such as the 2017 Tercentenary and our support to the forthcoming events, along with the forthcoming festival, to the care system, the Membership Focus Group, now renamed the Implementation Focus Group headed up by Philip Gunning and a reference to the membership pathway project were also mentioned.

Tony continued by referring to the Masonic halls and said he was most impressed with the ‘fantastic Masonic centre at Urmston’. On a final note, Tony touched on the subject of our own Freemasonry in that we should all continue to enjoy what we personally experience in being a member of a great fraternal organisation.

In response to the toast to the Provincial officers, Jonathan Hall responded and similarly thanked the brethren for a ‘fantastic ceremony’ Jonathan congratulated the light blues for their presentations of the tools and similarly for the inner working tools, Jonathan said he was aware of Barlow Moor Lodge’s support of Ecclesholme and thanked for them for their donations.

The very friendly and jovial festive board, which had continued well into the evening, then concluded after a most enjoyable meeting.