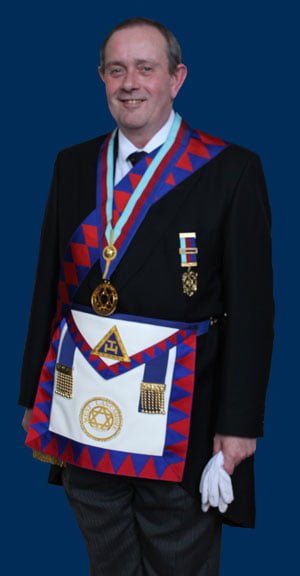 Tony Hall was invested as an Assistant to the Provincial Grand Principals responsible for the Chorley, Leyland, Ormskirk and Southport Groups at the meeting of Provincial Grand Chapter held at the Floral Hall in Southport.

Tony was born in August 1961 in Coventry and was educated at Caludon Castle School. On leaving school he went to work at Jaguar Cars, serving a four-year Engineering Apprenticeship, while studying for his professional qualifications in the evening.

Upon successfully completing his apprenticeship and attaining his professional qualifications, Tony has had a successful career working for many well-known automotive and industrial companies including Unipart, Land Rover, Leyland DAF and Perkins Engines.

In a planned career change in the 1980s Tony decided to learn more about creating technical publications and became qualified as a Technical Author. These qualifications combined with those gained previously enabled him to become a Member of the Institute of Scientific and Technical Communicators and he has been employed as a Technical Author ever since.

He and Jean became engaged whilst cruising the Nile and they married in Mauritius in 1992. They live in a detached house in Euxton.

Tony has taken part in a number of sponsored charity events over the years including a litter pick and a raft race. Tony says that the raft race was: “Particularly interesting because of two things: firstly that each team had to build their own raft from scratch and secondly that on the stretch of river to be navigated, there were three weirs that needed to be negotiated. A rather wet (though enjoyable) experience!”

Tony and Jean really enjoy travelling and in recent years have toured much of the continent by car; Poland, Germany, Belgium, Holland, France and Greece to name but a few. Further afield, they have cruised down the Nile, toured Thailand and the Holy Land (to name but a few). 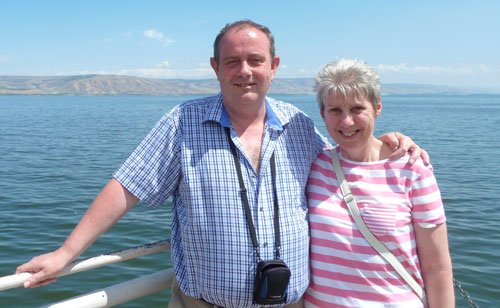 Tony with his wife Jean on the Sea of Galilee.

Tony was initiated into Astley Lodge No 6234 in the Chorley Group in 1994 and was installed as WM in 2005. The lodge amalgamated with Ellesmere Lodge No 730 and is now Astley and Ellesmere Lodge No 730. Tony is also a member of Phoenix Lodge of Installed Masters No 9206 and Quingenti Lodge No 8516. In 2008 he received his first Provincial appointment as PrGStwd and was promoted to PPrGSuptWks in 2012. At Provincial Grand Lodge in May 2015, he was promoted to the Rank of PPrJGW.

Tony was appointed as Chorley Group Mentoring Officer in 2007 and Chorley Group Year Book Secretary in 2008. He became the Group Secretary for Chorley Group in 2010 and was promoted to vice chairman in 2012 from which role he has now retired in order to take up his new office.

In 1998 Tony was exalted into Withy Chapter (now Cuerden with Withy Chapter) No 7733 meeting at Leyland, serving as its first principal in 2008. He became the chapter’s scribe ezra in 2011 and received his first Provincial appointment as PrGStwd, becoming a member of Provincial Grand Stewards’ Chapter of West Lancashire No 8516, in the same year. He is also a member of Horwich Chapter No 2324 and is scribe Ezra of Setantia Chapter of Installed First Principals No 7755. Tony was the Provincial Grand Scribe Nehemiah for the 2015/2016 season and says that he: “thoroughly enjoyed his busy year of office and the pleasure was made all the greater by the support he received by the regular group of acting Provincial grand officers – they know who they are”!

Tony said of his appointment: “I was both surprised and honoured to be asked to take on this important role and I’m looking forward to the challenges which the position will bring. I look forward to working with the members of the Chorley, Leyland, Ormskirk and Southport Groups and to contributing to the excellent work that they have done and will continue to do.”