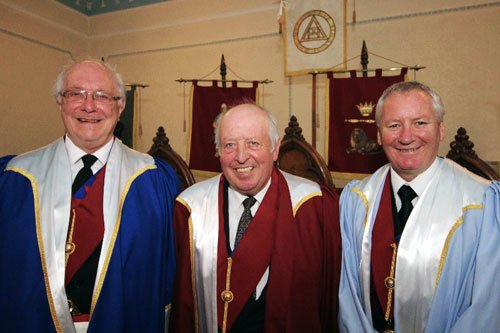 A visit by the Grand Superintendent Tony Harrison is always a special occasion and over 50 companions turned out to enjoy a delightful installation meeting at Tithebarn Chapter No 8446. Weeks of hard work and preparation went into putting on a superb exhibition of Royal Arch ritual and the enjoyment of the companions was plain to see.

The three principals, from left to right, are: Mike Heed, Michael Rogers and Bob Wolstencroft.

With the chapter open and the business completed, Provincial Deputy Grand Director of Ceremonies Neil MacSymons was welcomed into the chapter. He announced that the Grand Superintendent was without and demanded admission. The chapter’s first principal Roger Buckley expressed the delight of all to receive him. The principal guest, supported by Past Second Provincial Grand Principal Peter Elmore, Assistant to the Provincial Grand Principals David Randerson, with several other grand officers, Chairman of South Fylde Group Ian Ward along with five acting Provincial grand officers and other distinguished companions, entered the chapter.

At the conclusion of the ceremony cheques to the value of £1,000 were presented to Tony Harrison on behalf of West Lancashire Freemasons’ Charity (£400), the Tercentenary Appeal Fund (£100), the British Red Cross Association (£100), the Ronald McDonald Alderhey Hospital Suite (£100) and Poulton-le-Fylde Masonic Hall (£300). 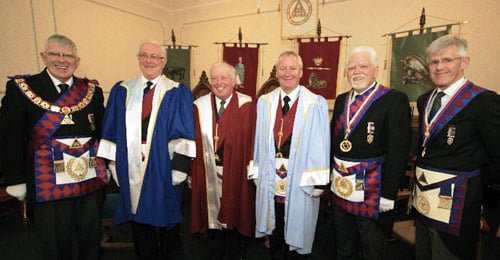 Over 50 companions retired to a fine banquet after which David Randerson, responding to the toast to the grand officers, said it was a pleasure to be there to witness such a super ceremony. He praised the effort put in by all concerned in making sure that the ceremony went so well. In his toast to Tony Harrison he was delighted to report the great admiration in which the Province of West Lancashire is held in London, mainly due to the way the Grand Superintendent is driving it forward on many fronts.

In his reply, Tony Harrison told of his enjoyment in his term at the helm because of the support and friendship he was receiving from the members and from his team. He warmly welcomed the return of Peter Elmore, who had been suffering ill health. He described the ceremony as excellent and congratulated all who took part. He continued by praising South Fylde Group officers for all of their hard work. He voiced his delight at seeing so many acting Provincial grand officers and thanked them for their support.

Tony also congratulated all who had received new ranks. He continued by discussing recruitment and urged Craft lodges to invite the ‘Talking Heads’ team to their meetings, as this was bringing people into Royal Arch. After reporting on the plans for the tercentenary celebrations, Tony gave a big thank you to the chapter for their very generous donations to charity.

Proposing the toast to the new principals, Roger Buckley said what a great pleasure it had been to prepare for the evening with them. He advised his audience that the whole team had worked hard together in a friendly atmosphere, well supported by director of ceremonies for the evening Ken Sykes. He concluded by thanking all present for turning out in such numbers.

Responding for the principals, Michael Rogers also thanked all who attended, particularly Tony Harrison, David Randerson and Ian Ward for finding time in their busy schedules to attend this installation meeting, adding that the chapter was greatly honoured by Tony’s presence. He went on to thank everyone who had taken part in the ceremony for their support and hard work before concluding by presenting flowers to the Grand Superintendent for his wife Maureen.

The evening was concluded by the janitor’s toast which was proposed by the Provincial Grand Janitor Gordon Ivett.