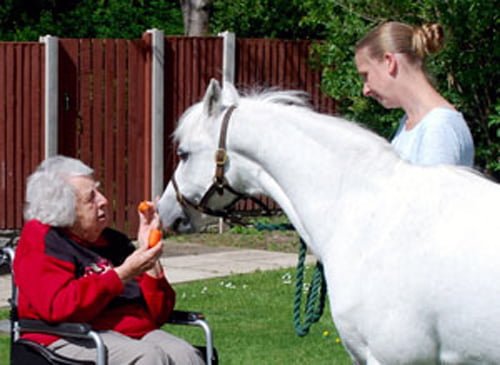 Britain is generally considered as a nation of animal lovers with many residents in care homes missing the companionship and love a pet can give. With this in mind the residents of The Tithebarn in Crosby, were able to enjoy a pet Sunday, which was organised for the residents by Mary Piert, Tithebarn activities adviser and Graham Chambers of Crosby Lodge No 3714.

Resident Chris Ingleby (left) feeds Rosie with a carrot, with Faye looking on.

The day was originally organised through a conversation between Mary and Graham, about the current season’s activities for the residents of The Tithebarn, which for this period is all about animals and wildlife. Graham suggested that he could bring his pet pony Rosie along for the residents to feed and stroke, as a way to bring another activity for the season’s incentive.

Depending upon the weather, the day was planned for a Sunday in May, and with weather being right, Graham brought his pony Rosie along. Graham was joined by his wife Anne and family, with their daughter Faye also bringing many of her pets; a chocolate coloured Labrador named Daisy, two rabbits and two guinea pigs.

The animals were brought around to the rear lawn of the home, with the residents being already seated enjoying a cup of tea. The rabbits and guinea pigs had little pens set up so they were able run around, before being taken amongst the residents, so they were able to handle and stroke them, which brought a smile to their faces.

The impact of having pets as therapy helps to enhance the well-being in many elderly residents. Animals can have a positive effect on their mood and emerging research suggests they may have the ability to boost health and general well-being.

Later this year Mary is arranging to have an incubator set up so the residents are able to see chicken eggs hatch, and be involved in the incubation period by rotating the eggs.

Everyone thoroughly enjoyed the day with many residents looking forward to the next encounter. 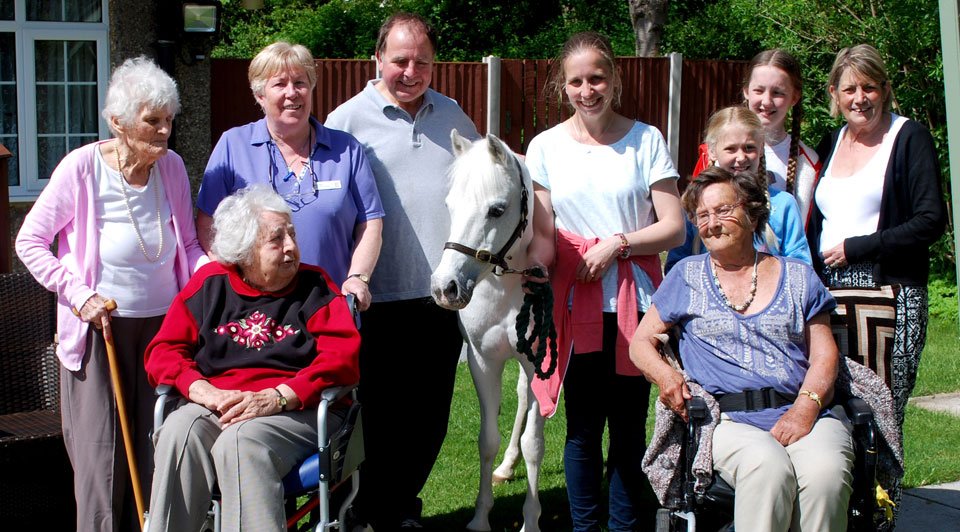 Pictured are: Mary Piert (second left back row), Graham Chambers (centre) and his family, with residents of Tithebarn and Rosie the pony.