Thornton Chapter No 8008 companions and visitors met for the installation ceremony of Peter Kelly as their new first principle. The companions were pleased and honoured to have the presence of the Vice Chairman of Gladstone Group John James as their principle guest.

After John was warmly welcomed by the three principals to the chapter, the installation ceremony commenced with Peter Kelly and Ian Pye being installed into the office as first and second principal respectively with Colin Percy remaining as third principal.

The ceremony was under the expert direction of the chapter’s acting DC David Simpson who carried out his duties with a high level of proficiency. The scripture readings during the ceremony were delivered in a proficient and confident manner by Peter Levick. The crimson robe address was presented by Barry Jones and the purple robe address by Roy Pyne.

Once the principals had been installed into their respective chairs and the officers installed for the forthcoming year, John congratulated everyone on behalf of the Grand Superintendent Tony Harrison, for having taken part in the ceremony. John Roxbrough in particular was congratulated for having had a successful year and John also thanked acting DC David Simpson on the way he had overseen the ceremony. 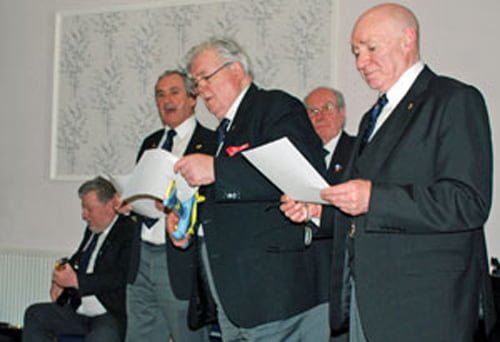 Peter then presented John with three cheques; the first for £100 to the West Lancashire Freemasons’ Charity, £100 for the Litherland Masonic Hall, and £50 to The Bootle Group Widows Fellowship. John thanked Peter on behalf of the recipients for the generous donations.

Following the convocation the members and guests retired to enjoy an excellent festive board. There followed a performance of the three principal’s song by some of the companions and guests with Ian Gee accompanying them on the guitar; under the name of ‘The Litherland Masonic Male Voice Choir’, which everyone thought was very entertaining and enjoyable addition to the evening.

During the festive board a raffle was held that raised £108 which will be distributed to charities later in the year.

Once the evening came to a close a presentation of a bouquet of flower was presented to John, for his wife, from the companions of the chapter.  The evening then closed with everyone leaving after having enjoyed a very warm and jovial evening amongst friends.

Pictured centre: John James and the three principals with their distinguished guests and officers.