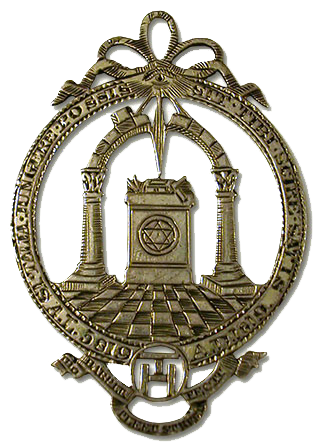 On the bottom scroll is inscribed the motto “Nil nisi clavis deest, nothing but the key is wanting”, which may be taken in its literal sense.

Then the Circle is an emblem of eternity with the motto “Talia si jungere possis sit tibi scire satis, if thou comprehendest these things thou knowest enough”.

Within we have a chequered pavement to represent the uncertainty of life, and the instability of things terrestrial; and on it the representation of a pedestal of pure white marble, in the form of the altar of incense, being the true double cube, and, therefore, both in figure and colour the perfect emblem of innocence and purity.

The whole delineates the vault with the rays of the meridian sun illuminating the Altar, the Book of the Holy Law being placed thereon. On the front of the altar, within a double circle, we find two intersecting triangles said to denote the elements of fire and water. The equilateral triangle was much revered by ancient nations as containing the greatest and most abstruse mysteries, and as a symbol of God, denoting a Triad of Intelligence, a Triad of Deity, a Triune God.

Moreover, the Tetragrammaton, or incommunicable name, was written by the Jews in a triangular form: the initial letter denoting the thought, the idea of God, a ray of light too transcendent to be contemplated by mortal eye; this name of God, the Tetragrammaton, could not be more aptly placed than in the symbol, or triangle, itself and hence the true meaning of the Royal Arch double triangle, but originally represented thus. So that while this sacred emblem was deservedly revered by the Jews, both it and the double triangle itself are adopted as Royal Arch symbols.

Underneath is the compound character known as the Triple Tau, one of the Royal Arch Mason’s emblems. This mystical character signifies in its figurative appearance Hiram of Tyre, the letters bearing the same Phaenician import as they do with us. It signifies also T. H., Templum Hierosolym, the Temple of Jerusalem, and is used as the Royal Arch symbol, whereby the wearer acknowledges himself a servant of the true God; who had there established His worship, and to whose service that glorious Temple was erected.

The Royal Arch symbol therefore may aptly recall to our minds our constant duty to offer worship to The Most High, The Everlasting, The Almighty God.

In a Royal Arch Chapter we have seven lights placed in the angles and centre of our double triangle. Some interpret the three greater and the three lesser as if identical with those explained.to you in the Entered Apprentice degree, while others consider them symbolical of wisdom, strength, and beauty; and truth, concord, and peace, well known expressions illustrative of our Order, but the more learned Jews consider the three greater lights to represent Wisdom, Truth, and Justice, while Christians consider them as emblematical of the Trinity.

The three lesser will then exhibit the three Principals, and also the moral and religious light which is derived from the Patriarchal, Mosaical, and Prophetical dispensations. The whole taken together being emblematical of the beauty and harmony which is visible in all the works of Nature, where nothing is wanting nor anything superfluous. By all the central beam from the Altar is held to be that which irradiates the whole. The seven lights may also be held to represent externally the ordinary three great lights of masonry, while the inner four shew forth the Tetragrammaton itself.

In approaching the Altar you were commanded to halt seven times and make obeisance at the third, fifth,and seventh step. The same practice is said to have been observed by the Most Excellent Grand Master, King Solomon, on passing each of the seven pillars which supported the arch of the private gallery through which he passed daily to offer up his praises to the Almighty. It ought to remind you of the works of Creation, to keep the seventh day holy also of the seven months required, for the erection of the Tabernacle as likewise of the seven complete years for the building of the Temple, and the seven additional months, six being added to finish the work, and the seventh in sacrifices and thanksgiving at the dedication.