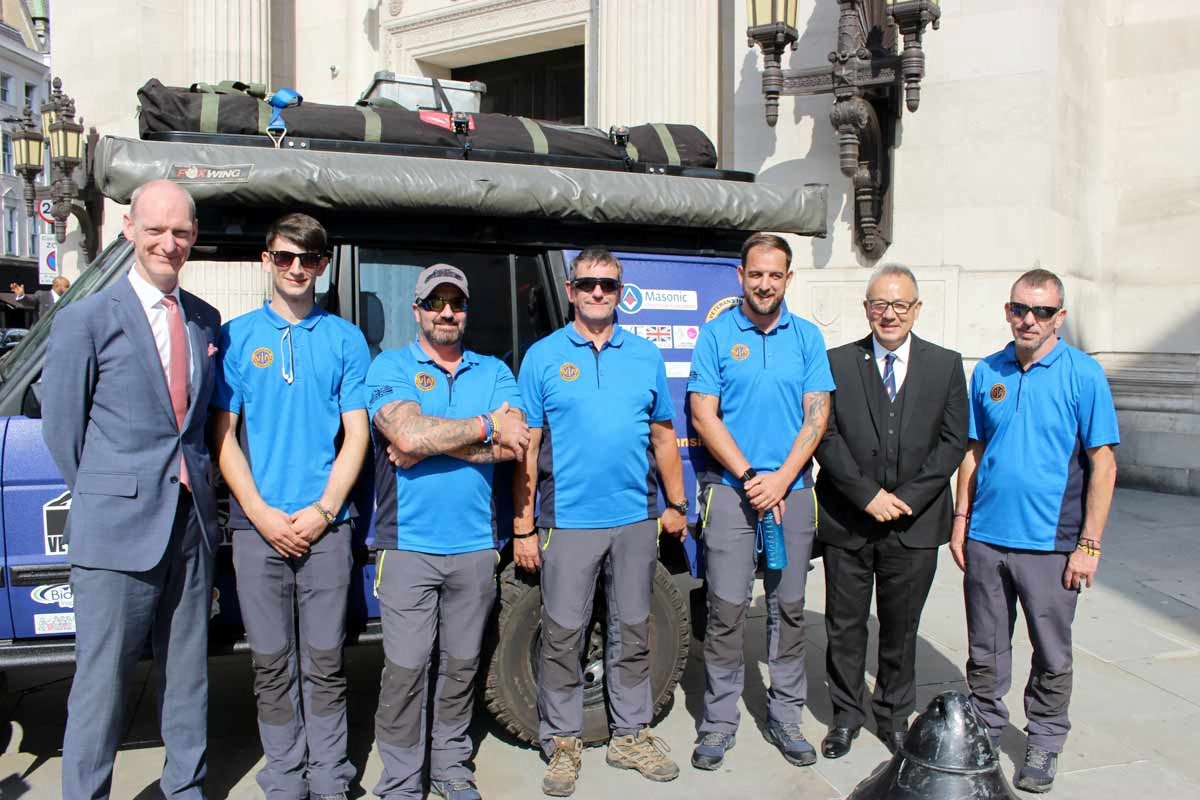 Four Land Rovers have left Freemasons’ Hall in central London for an overland expedition driving from the UK to Greece and back, a journey of 7,000 miles passing through 14 different countries.

Veterans in Action help those who have suffered the effects of war or who have found the transition back to civilian life difficult. VIA also work to enable people to understand more about Post-Traumatic Stress Disorder (PTSD) and veterans’ mental health issues. VIA uses the outdoors, centre-based projects, adventurous activities and expeditions to help veterans re-build their confidence, self-esteem, and self-belief.

The charity was one of four to be nominated by Freemasons in Dorset, with local people voting to decide the level of their award. They were part of 178,801 people who voted across England and Wales.

The Community Awards were a major part of Freemasonry’s 300th anniversary celebration. The Masonic Charitable Foundation distributed three million pounds to 300 charities across the country, with the public vote deciding on the range of awards from £4,000 to £25,000.

Work started on the vehicles in November 2017, with a group of veterans from all over the UK, plus serving personnel from the local Tidworth Garrison, coming together once a month to work on first stripping the vehicles then fixing and preparing them for the overland expedition. To date over 50 veterans and serving personnel have taken part in the project

These vehicles will give longevity to the project and will be used to train veterans in all aspects of expedition planning, off road driving and active expeditions. Mini expeditions are currently being planned which are aimed at the local military garrison, Tidworth, Wilts where there are 15,000 troops and their families.

In 2019, after the expedition returns from Greece, Veterans In Action plan to do a year long road trip around the UK to raise awareness of Post-Traumatic Stress Disorder. They hope to raise funds to buy a property that will be set up as a veteran’s retreat, which will include many workshops and outdoor activities.

Following the Dorset Freemasons’ grant, VIA were also awarded £10,000 from AVIVA, £10.000 from The Veterans Foundation and £10,000 from the National Lottery. They have also received sponsorship from many companies which include Maltings 4×4, All Makes 4×4, Terrafirma 4×4, UPOL, Raptor Paint, Premier Group, Curry’s/KnowHow, Teng Tools and Regatta Outdoors, as well as individual Masonic Lodges from across Hampshire, Wiltshire and Dorset.

The grant from Dorset Freemasons comes through the Masonic Charitable Foundation, which is funded by Freemasons as well as their families and friends from across England and Wales.

Billy MacLeod, Chief Operations Officer of Veterans In Action said, “The initial support of the grant of £25,000 from Dorset Freemasons made the Veterans Expeditions Overland project a reality. That’s why we’ve decided to set off on our expedition from Freemason’s Hall in Central London. On our return we’d like the chance to visit as many Lodges as we can around the country to show them what their support has achieved.”

Mark Burstow from Dorset Freemasons said, “We’re very pleased to be able to support Veterans In Action, who do outstanding work with veterans who are living with the effects of war. Our service personnel have given a great deal to our country and it’s only right that we give something back to them.”