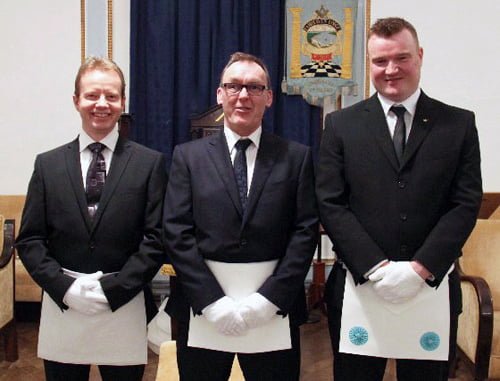 The ‘sky blues’ have made their mark this year with a great deal of new ideas and new friendships. These have resulted from a recent initiative led by Provincial Senior Grand Warden designate John Lee. An opening event at Cleveleys Masonic Hall saw over 70 brethren attending in the dining room, many of whom retired to the bar where networking was the order of the day. It will be of no surprise therefore that Fairhaven Lodge No 5076 sent a strong delegation to this event.

Pictured from left to right, are: David Arrow, Melvin Gray and Stuart Hiley.

The master of Fairhaven Lodge John Conroy was well supported by his wardens, Terry Stephens-Lewing and Andrew Harwood, along with three other sky-blue members, two of whom were fellow crafts. Their activities have resulted in several visits to their lodge from brethren from across the Fylde, followed by Fairhaven Lodge brethren visiting other lodges, including Peace and Unity Lodge No 3966 and Anchorsholme Lodge No 5854. Visiting exchanges already exist with Lodge of Fidelity No 1256, Landmark Lodge No 7273 and Tithebarn Lodge No 8446, all of which meet at Poulton-le-Fylde.

The Fairhaven Masonic year has been a rollercoaster ride which began with Roger Perry representing Provincial Grand Master Tony Harrison at the installation. Roger was pleased to note on that occasion just how many younger members were working their way through the ranks. The new team wasted no time in making their mark with the initiation of Graham Dew. In this ceremony every officer on the floor was wearing sky blue. Since then they have passed Melvyn Gray to the second degree, raised David Arrow to the third degree and at their last meeting before the recess, raised Melvyn Gray as well. 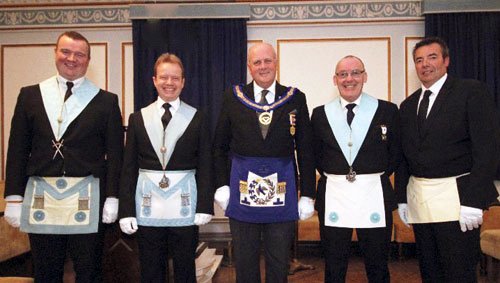 The passing ceremony for Melvyn Gray was a delight to watch with master John Conroy leading from the front, again supported by his sky blue team with Paul Frieburg covering as junior deacon. The candidate was guided through this ceremony by Mick Steel with confidence and ease, characteristics that would prove to be second nature during subsequent meetings. Melvyn Gray conducted himself very well throughout the ceremony, obviously enjoying the experience. Enjoyment of life is a constant characteristic of Melvyn’s. He has taken to Masonry like a duck to water and is ever eager to learn and be involved. A fine ceremony of passing was concluded by an explanation of the second degree tracing board delivered by David Atkinson in his own inimitable fashion.

At the following month’s meeting David Arrow was raised to the third degree, again by the master John Conroy, a feat of ritual rarely achieved by a first term master. Two separate degree ceremonies in 28 days is usually the preserve of experienced past masters. This meeting was attended by a larger assemblage, partly due to the reputation being built by the lodge and partly perhaps by the attendance of Assistant Provincial Grand Master David Winder. David, who’s meeting with David Arrow at a charity giving day, was influential in the candidate’s membership of the lodge – no pressure there then! 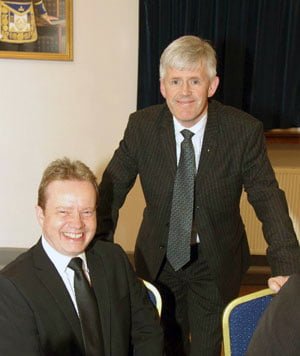 David Arrow (left) chats with Ian Ward at the festive board

David Winder’s presence seemed to inspire the Fairhaven team and an excellent ceremony of raising was witnessed by all. With the ubiquitous Mick Steel in support, David Arrow answered his questions with confidence and aplomb before being entrusted and retiring to prepare. It was again Mick Steel waiting inside the door to conduct the candidate through the ceremony. Needless to say, Mick carried out his duties with the same calm confidence shown during the ceremony of the previous month. John Conroy was an example of control and ease and there was another fine ceremony put to bed. Or was it?

In responding for the grand officers, David Winder described the work as ‘truly outstanding’ and a great advertisement for the Craft in general and Fairhaven Lodge in particular. He added that at a time when members were being urged to enjoy their Masonry such encouragement was hardly needed at Fairhaven Lodge, just more of the same. Replying for the Provincial officers the lodge almoner Alan Brotherton said that it was an honour to reply on such a unique occasion when the ceremony was distinguished by near perfect ritual and some very crisp working indeed. Alan particularly mentioned the splendid explanation of the working tools given by Stuart Hiley, himself only recently raised to the third degree. In all, a fitting occasion for the lodge’s 900th meeting. 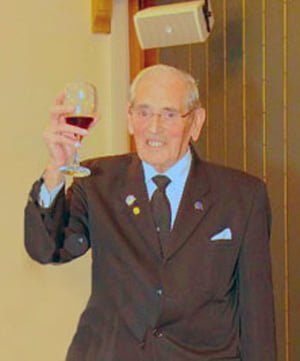 In the last meeting before the summer recess another third degree ceremony was in the offing, with Melvyn Gray the centre of attention again. The meeting was launched with the same efficiency as usual. Lodge secretary Kevin Burns had the pleasure of reading the letter received from David Winder giving warm praise for what he had witnessed at the previous meeting. Then with the early business conducted, the lodge was opened in the second and third degrees. Salutations were led by director of ceremonies Peter Robinson to the grand and Provincial grand officers. The lodge was then resumed and the candidate answered his questions in fine style and retired to prepare.

On this occasion, immediate past master Philip Low acted as junior deacon, with Peter Robinson at the master’s left. The remainder of the team was unchanged. An alarm was received and inner guard Stuart Hiley announced the candidate with confidence and precision. As ever, Mick Steel was on hand to take control of the candidate and yet another third degree ceremony ensued, in many ways as splendid as that of David Arrow’s raising the previous month.

Needless to say that with Melvyn as the candidate a note of humour was always an undercurrent, with the wardens Terry Stevens-Lewing and Andrew Harwood having to admonish the candidate by saying: “Stop giggling, you’re supposed to be dead!” However, this didn’t detract from the sombre air usually associated with the degree. As before the master and his officers were near perfect. David Atkinson was again impeccable in delivering the traditional history from the centre of the room and Stuart Hiley was again inspiring with his explanation of the working tools.

Immediately after this ceremony the lodge members proceeded with the vote to elect David Winder as an honorary member. The vote was a unanimous and resounding success.

South Fylde Group Chairman Ian Ward presented Melvyn Gray with his third degree folder of information. In doing so he noted that Melvyn enjoys his Masonry and has been seen at many meetings recently. Ian later congratulated Fairhaven Lodge members on another very fine ceremony of raising. He added that the standard of work reflects very well on the director of ceremonies who had been seen but not heard. 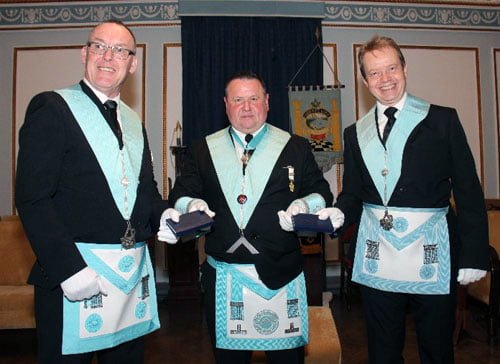 Responding for Provincial grand officers, Simon Walker complemented the lodge members on the very happy and friendly atmosphere that existed in the lodge and concurred that the work was of an exceptional standard. In speaking for the visitors at this meeting, Terry Murtagh of Anchorsholme Lodge described the ceremony as: “Work of a very high standard of which all the officers should feel rightly proud”. He also congratulated Melvyn on his raising.

The festive boards that follow meetings of Fairhaven Lodge are, needless to say, occasions of mirth and glee. New stewards in the bar are Roger and Monica and their friendly and welcoming demeanour is enriching the enjoyment of many functions held at St Anne’s Palace, particularly the banquets at lodge meetings that take place there. In theory speeches are made by specific officers; in practice one isn’t so sure as there is enough banter at a Fairhaven Lodge festive board to throw most occasions off track. Somehow they seem to hold it together well and lead up to the song to the visitors, led by Alan Brotherton for more years that anyone can remember, after which the members circulate amongst the visitors to clink glasses, invite people back and more importantly invite them into the bar for ‘one for the road’. Fairhaven Lodge is now in recess but look out for their future meetings, as this lodge is ‘buzzing!’