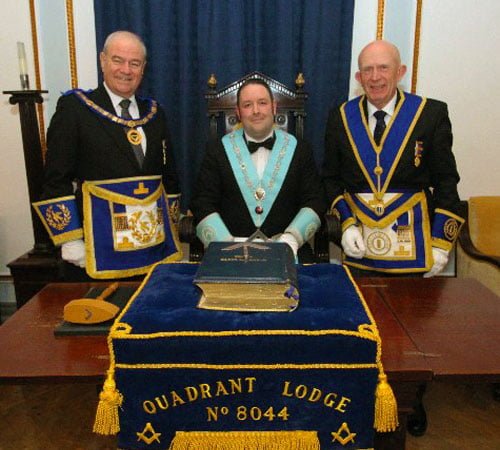 The pursuit of perfection is imperative at Quadrant Lodge No 8044 and success is normal at their installation meeting, so turning up to witness a magnificent installation was a joy for all to see. That joy was shared by all 86 members and guests in attendance.

Pictured from left to right, are: Tony Bent, Ben Gorry and Simon Walker.

Salutations were led by David Lawn, after which the master invited Liam Bird to act as senior warden, Tony Hankinson as junior warden and Ken Cotton as inner guard. The master elect Ben Gorry was then presented by Barry Bromhead and excellently installed by master of the lodge Simon Walker.

The working tools were perfectly presented by brothers Jason Emsley, John Bainbridge and Kevin Frost, reinforcing the fine reputation of the younger members of Quadrant lodge. The address to the master was delivered by Terry Hudson with dignity and precision; that to the wardens impressively by David Kenworthy and the address to the brethren was inspiringly delivered by Tony Bent. 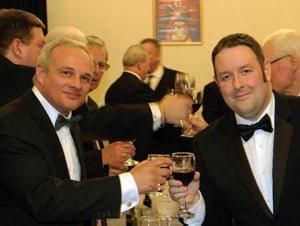 At the conclusion of the ceremony Tony Bent extended the congratulations of the Provincial Grand Master Tony Harrison to the new master. He assured the brethren that had the Provincial Grand Master been present he would have congratulated the installing master, the director of ceremonies and the whole installation team on what had been a superb ceremony.

Ben Gorry presented cheques to the total of £2,500 for various charities, including the West Lancashire Freemasons’ Charity. Tony Bent thanked the brethren for their generosity, particularly on behalf of those who would benefit from the several donations.

Following the meeting the brethren retired to enjoy an excellent banquet provided by Lee Munro and his Square and Compass catering team.

Responding to the toast to the grand officers, Tony Bent thanked the considerable number of grand officers who had supported him. He particularly thanked Harry Cox and Terry Hudson, complimenting Terry’s polish and ability which never loses its lustre. He continued by entertaining his audience with a series of amusing anecdotes, concluding by wishing Ben Gorry the best of health to enjoy one of the best of years of his Masonic career. Tony applauded Simon Walker and his installation team, adding that he had not seen a better ceremony of installation during the current Masonic year. It was exemplary and what shone through was that everyone seemed to enjoy the work they were doing. He described the greetings in the north as being performed with military precision, commenting: “You are to be applauded for the example that you set for others to follow.” 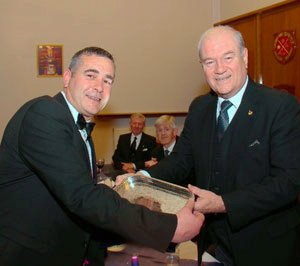 Mick Wall (left) receives the commemorative tray from Tony Bent for being judged the most improved younger member in the lodge.

Tony continued by praising the lodge for presenting him with charity cheques amounting to £2,500. The largest, for £1,200 was for West Lancashire Freemasons’ Charity; others were for Brian House Children’s Hospice (£400), The Ormerod Trust, which works to maintain good standards of health care across a range of providers (£400) and The Friends of St Anne’s Palace (£500), which he described as an astonishing achievement showing the breadth of generosity and thinking of the brethren of Quadrant Lodge. Also, talking of the tercentenary of grand lodge, he advised of the habit in London to look to the North West of England when initiatives and innovation are being considered, such as our care structure, membership focus groups and Masonic halls. Tony concluded by expressing his thanks to lodge secretary Leon Gaskell for his kind courteous consideration, adding that he was an excellent ambassador for the lodge. Before he could relax Tony was asked to make a presentation to Mick Wall for his single contribution to the lodge and marked personal development during the year.

In proposing the toast to the master’s health Simon Walker gave an inspiring account of the new master’s progress through Port Glasgow High School and Heriot-Watt University, through to his initiation and onto the present time, describing the high standards that Ben Gorry sets himself in everything he does.

Responding to this, the new master thanked the lodge officers for their support. He gave particular thanks to Abdul Benashour for taking the junior warden’s chair, also to David Lawn for his fantastic work as director of ceremonies. He reiterated Tony Bent’s praise to secretary Leon Gaskell, adding the name of treasurer Tony Hankinson for all the work they do, particularly in arranging the evening’s event, where there were so many in attendance. He thanked Simon Walker for making the year very easy and putting him at his ease. He continued by lauding the caterers and the hall staff for their hard work in ensuring the success of the evening and looking after the ladies who were dining in the other banqueting suite. He concluded by praising his wife Alison for her continued support and thanked his proposers Terry Hudson and Barry Bromhead for their continued encouragement. His final comment was: “It’s been a wonderful day!”

The master’s song was excellently rendered by John Darrell with warmth and humour and the evening was concluded by the tyler’s toast which was finely delivered by Kevin Frost.