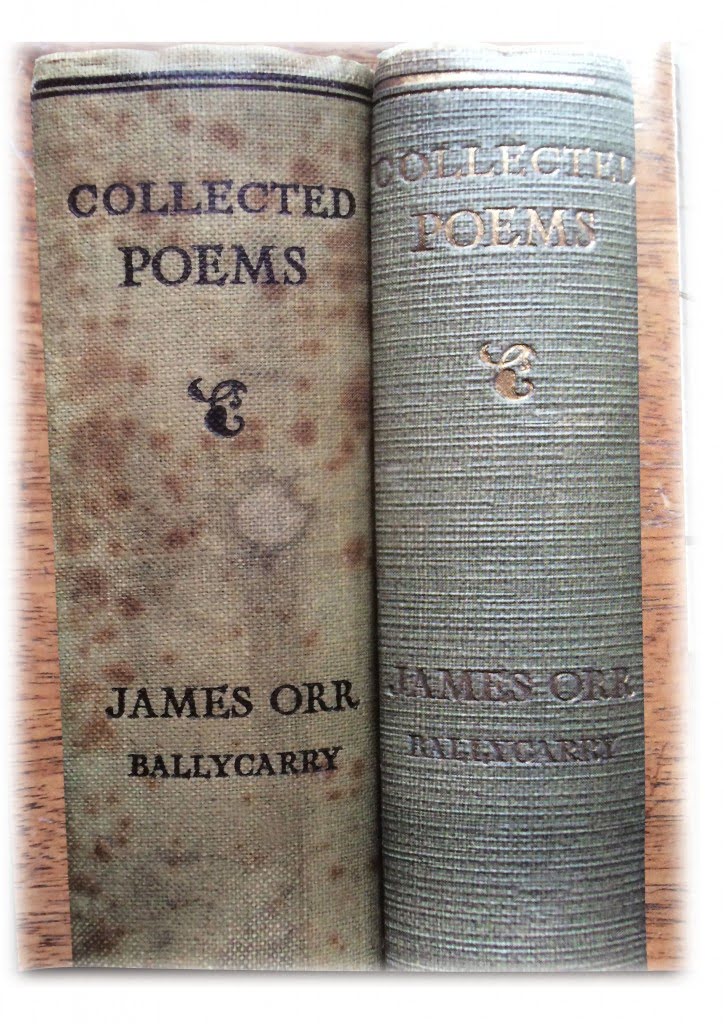 Some of Orr’s Published Works.

Brethren,
Some 200 years ago, on the 24th April 1816 James Orr was buried in the old graveyard at Templecorran, Broadisland on the outskirts of the village of Ballycarry. The Provincial Grand Lodge of Antrim, in the form of Wor Bro Billy Thompson, and a small party of Brethren from Redhall Masonic Lodge No 260, Ballycarry, were in attendance at Templecorran on the afternoon of Sunday the 24th April 2016, to take part in a quiet memorial to the memory of James Orr – Poet, Patriot and Philanthropist and United Irishman. And the Larne Times had a reporter present to record the occasion for posterity. 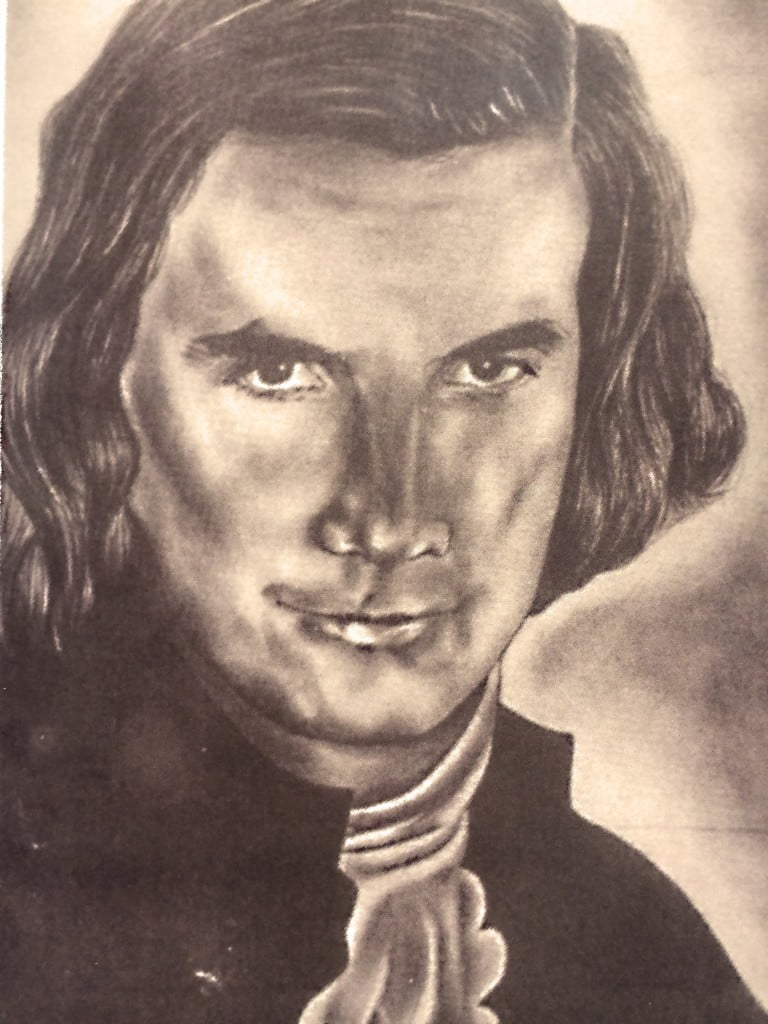 Orr was born in the Parish of Broadisland, in the year 1770. He was an only child and was educated at home, by his father, a weaver and owner of a small tract of ground near the village of Ballycarry. He was trained by his father in the use of the loom and followed in his footsteps to the weaver’s trade. He also became a small farmer, cultivating the few acres of land passed on to him in by his father. Due to the tedious nature of the work, Orr involved himself in, he developed his skills as a poet and joined the Roughfort Book Club. This was very much an activity of the 18th century, and a means of raising the standards of education among’st the rural population. Orr himself wrote of the Reading Societies in the following terms.

The Sun has set in smiles and pensive eve
Sheds soft’ning dew-drops on the thirsty soil;
The slow-pac’d swains the cultur’d landscape leave,
And from their work-shop stalk the sons of toil.

My sweet associates, kind in thoughts and looks,
Who all my toils, and all my pastimes share;
Attend the reading circle with your books,
And sensibly converse away your care.

In this poem, as in so many others Orr writes warmly about the life of the cotters, farmers, weavers and villagers, all friends and neighbours of his own, and records their attempts to better and improve their circumstances in the midst of the abject poverty of the time.
This social conscience exhibited so clearly in his early work, made it a given that he would involve himself in the struggles of the United Irishmen at the time of the 1798 Rebellion. One of the first victims of this insurrection was another Orr, in this case William Orr who was found guilty of administrating the oath of a United Irishmen, to two soldiers, who turned him in to the Government. A trial took place, and despite the evidence presented, Orr was found guilty and sentenced to death. He was hanged in Carrickfergus on the 14th October 1797.

This one event,, under the catchphrase Remember Orr would influence many people including James Orr to involve themselves in the 1798 rebellion, or as it was known locally as The Turnout. Orr marched to Antrim with the men of Broadisland, encamped at Donegore Hill and took part in the Battle of Antrim. The men were out in force and Orr recorded his thoughts at the time in his poem Donegore Hill.

Sadly the battle was lost and Orr joined the small party accompanying Henry Joy McCracken, their leader, as they fled to the wild country around Slemish mountain. This was a very severe time in the history of Antrim. Men were forced on the run, as capture meant certain death for those involved in the Turn Out. Orr captured the desperation of these times in his song The Wanderer which tells the moving story of a man, hounded from pillar to post,seeking refuge in a local house to escape the winter storms around Slemish. The story is told against the backdrop of local informers, patrolling dragoons and the general hardship of the times.

“Wha’s there?” She ax’t, The wan’rers rap
Against the pane the lassie scaur’d
The blast that bray’d on Slimiss tap
Wad hardly let a haet be heard.
“A Frien’,” he cried, “ for common crimes
Tost thro’ the country fore and aft”
“Mair lown,” quo’ she – “thir’s woefu times! –
The herds’s aboon me on the laft”.

Orr successfully made good his escape, after making his way to the coast, where he eventually arrived in America after more adventures and close shaves. It was at this time, leaving his home in Erin that he wrote his best and most moving poem – The Irishman.

The Savage loves his native shore,
Though rude the soil and chill the air,
Well then may Erin’s sons adore
Their isle, which nature formed so fair!
What flood reflects a shore so sweet,
As Shannon great or past’ral Bann?
Or who a friend or foe can meet,
So gen’rous as an Irishman?

His hand is rash, his heart is warm,
But principal is still his guide –
None more regrets a deed of harm,
And none forgives with nobler pride.
He may be duped, but won’t be dared; –
Fitter to practice than to plan,
He dearly earns his poor reward,
And spends it like an Irishman.

If strange or poor, for you he’ll pay,
And guide to where you safe may be ;
If you’re his guest, while e’er you stay,
His cottage holds a jubilee;
His inmost soul he will unlock,
And if he should your secrets scan,
Your confidence he scorns to mock,
For faithful is an Irishman.

By honour bound in woe or weal,
Whate’er she bids, he dares to do
Try him in fire, you’ll find him true.
He seeks not safety; let his post
Be where it ought, in danger’s van;
And if the field of fame is lost,
Twill not be by an Irishman.

Erin, loved land! from age to age,
Be thou more great, more fam’d and free!
May peace be thine, or should’st thou wage
Defensive war, cheap victory.
May plenty bloom in every field;
Which gentle breezes softly fan,
And cheerful smiles serenely gild,
The home of every Irishman.

Within a couple of years Orr quietly returned home to Ballycarry, where he returned to his profession as a weaver cotter. He published his first volume of poems by subscription, and it was immediately successful. The list of subscriptions contains the names of the most notable people in South Antrim, as well as the names of his friends and neighbours. He joined Masonic Lodge No 302 Ballycarry in 1809 -10, which met in the upstairs room in Millars Public House, and in 1814, Warrant No 1014 was issued to these Brethren in lieu of 302. Orr would spend the rest of his life in Ballycarry in humble circumstances. Times were hard and the little cottage that he lived in, is still standing a short distance west of the village, nearly opposite the Presbyterian Manse on the Beltoy road. He continued to write verse, which was published in the Belfast Magazine and Commercial Chronicle and The Belfast Newsletter. He also wrote numerous songs and poems for several local Lodges. Amongst these numbers we have – The Craftsmen of Ballycarry.

Kind visiting stranger, who roam without danger
Through Erin, the land we love dearly;
Since you’ve passed the best judge that belongs to our Lodge,
You’re a worthy, and welcome sincerely.

Your health and your number, shall wake echo’s slumber,
Nor shall you sleep long while you tarry,
For the rafters shall ring, with a song that we’ll sing,
On the craftsmen of sweet Ballycarry.

Other songs include the lines Spoken in St Patrick’s Lodge, Carrickfergus on St Patrick’s Day 1808 and St John’s Day. Then there was the famous Ballynure song –

Come let us here, my Brethren dear,
Secluded thus from vulgar sight,
In Fellowship and Friendship rear
A Temple up to Love and Light;
On Truth’s firm ground its walls we’ll found;
Our Union shall cement it sure;
Strife’s hammer’r rash shall never clash
Against the Lodge of Ballynure.

One of his most famous songs was – The Dying Mason – which was a popular song sung after the local Lodge meetings, as the Brethren enjoyed some conviviality. This was a song sung to the tune Lochaber which goes as follows:-

Farewell to the village, the best on the plain,
The lough, glen, an gran’hill , I’ll ne’er see again;
Adieu to my pleasure! Adieu to my care!
My poor auld frail folk, an my lassie sae fair;
The kirk whare I promis’d wi’ folly to part
An the Inn that ensnar’d me I lea without smart;
But och! How the sons o’ the Lodge can I lea,
An gae to my lang hame – the cauld house o’clay?

Nae mair shall I gang, while in this side o’ time,
A step nearer Light in the Order sublime;
Nae mair, while ilk mouth’s closed an’ fast the door bar’d,
Initiate the Novice, baith curious and Scaur’d;
Nae mair join wi’scores in the Grand Chorus saft,
Nor fondlt toast –“Airlan’” – an’ peace to the Craft;
I ay cud been wi’ ye, but now I maun stay
Confin’d in my lang hame – the cauld house o’ clay.

Orr died relatively young, on the 24th April 1816 and was buried in the graveyard at Templecorran. In the year 1831 a very fine monument was erected over his grave by Brethren from the local Masonic Lodges and other admirers. This is the Memorial that was re-dedicated by The Provincial Grand Lodge of Antrim in 2014, after extensive repairs had been completed, and which have been largely paid for by Members of the Masonic Order, with some assistance from the local community and other grant aid. 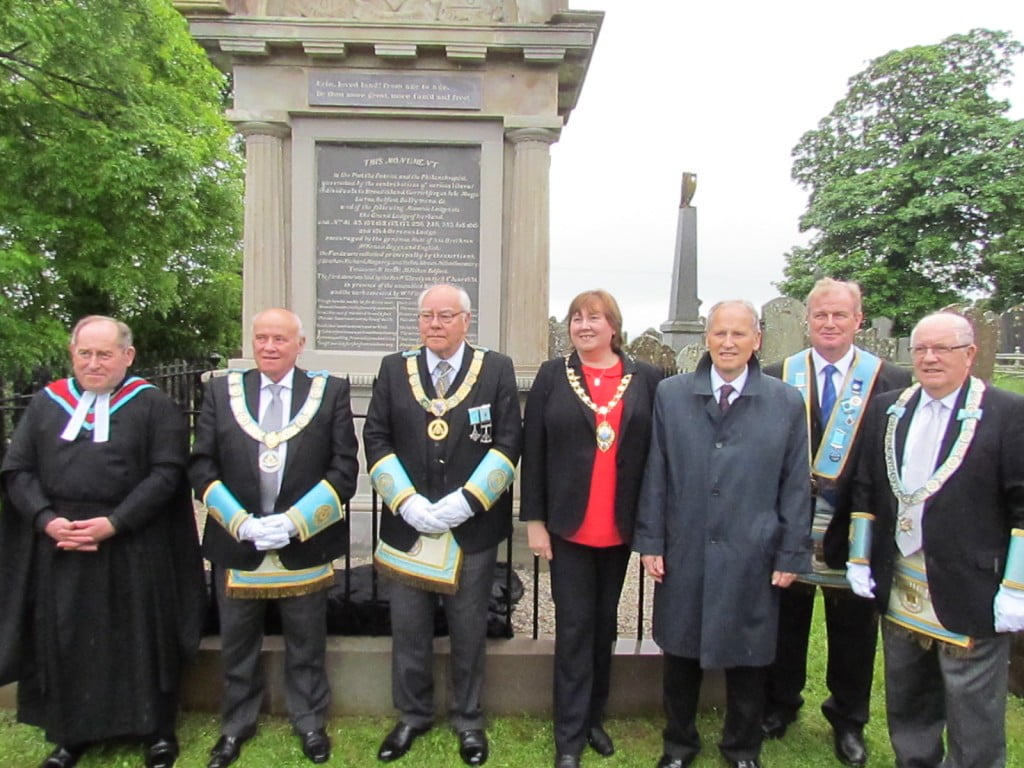 This is one of only two public Masonic memorials in Ireland, and as some of you already know, the other memorial is located in Comber in memory of General Rollo Gillespie. When you arrive at the Orr Monument, have a look on the west elevation where you will find the lines – “When lost amongst nettles ye’ll find if ye search, my stone of remembrance is marked with an Arch”.

Brethren, James Orr, lived in dangerous times and thanks to his poetic ability, we have an excellent record of those times from his point of view. He was a keen Freemason, Secretary of Lodge 1014, after its formation, and some of his Minutes and correspondence still survives. And thanks to the efforts of a number of our recent Provincial Grand Master’s we now have a memorial, fit for purpose, rebuilt and repaired to a high standard, to tell the story of James Orr for another two hundred years.

Today, we mark the memory of this excellent Brother. He lived in far different and troubled times and yet lived his life, to the full, within the tenets of our Order.