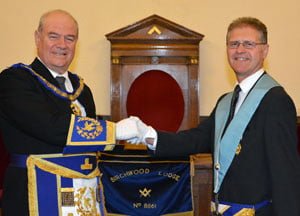 Almost 60 Freemasons attended the installation meeting of Birchwood Lodge No 8861 to support and witness David Hobbs being installed into the chair of King Solomon. The lodge members were extremely pleased and proud to welcome their principal guest, Assistant Provincial Grand Master Tony Bent.

The lodge was opened by the WM John Geering and the normal administration duties undertaken in the usual form. The lodge was then opened in the second and third degree. Ian Boardman, director of ceremonies announced that Assistant Provincial Grand Master Tony Bent was without and demanded admission. John said that he was honoured and privileged to receive him.

Tony was then admitted in due ceremonial style, accompanied by Past Assistant Provincial Grand Master Dennis Rudd, Gordon Amos and Andy Barton, (group chairman). John welcomed all present saying it was a particularly great honour and privilege to welcome Tony, also to see so many very distinguished brethren attending this special occasion and he continued by saying he hoped everyone would have a most enjoyable evening.

Tony thanked John and the brethren of the lodge for their very warm welcome and commented that he was very much looking forward to the evening and witnessing the installation ceremony. He continued by bringing the sincere good wishes of the Provincial Grand Master Tony Harrison.

John, as a matter of procedure and as a mark of respect, offered Tony the gavel, which on this occasion he indicated that it was a delight to accept and a joy to return it into John’s capable hands. 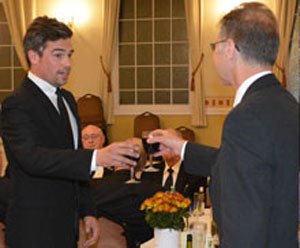 Bob Williams presented David Hobbs to receive at Phil’s hand, the benefit of installation. David was then installed according to ancient custom into the chair of King Solomon. David had been installed into the chair of King Solomon twice before on previous occasions in the Province of Cheshire. The ceremony was therefore a little shorter than usual but delivered with all due humility, sincerity and reverence.

Immediately following the installation Tony on behalf of himself and the Provincial Grand Master Tony Harrison, congratulated David on being installed into the chair of such a warm and friendly lodge. He commented that the ceremony was faultless and a pleasure to witness and thanked the installing master Phil for his hard work and the IPM John for his work over the last 12 months. He also praised all the officers for the smooth running of the ceremony, the members of the lodge for their work and Ian Boardman as director of ceremonies. He also gave special thanks to the younger members for their work on presenting the working tools. He extended his good wishes to all present and hoped David and all his officers would have a productive year wishing everyone the best of health to enjoy it to the full.

At this moment David conducted his first duty which was to present the charity donations to Tony. The donations were to Alzheimer’s Society for £500 (already donated), West Lancashire Freemasons’ Charity £300, Blue Lamp Foundation £250, Tercentenary Appeal £300, Army Cadets £200 and “Sense” £250, providing a grand total of £1,800.

Tony received the donations saying how pleased he was to receive such magnificent sums of money. He praised all concerned saying it was such a wonderful amount and thanked the lodge and brethren on behalf of the recipients, stating that the donations would be gratefully applied and pointed out how good it was to see not only the depth of the donations, but also the breadth of the thinking of the lodge in donating to such a diverse spread of charities. 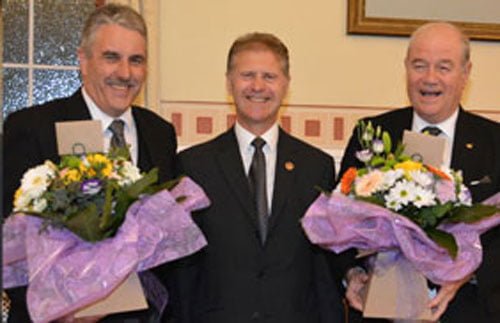 Pictured from left to right, are: Andy, David and Tony with their flowers.

The hall catering staff supplied an excellent four course banquet for the festival of St John. The meal which was enjoyed by all, comprised of homemade smoked salmon and asparagus quiche, roast beef and Yorkshire pudding, apricot bread and butter pudding with vanilla ice cream and a cheese board, accompanied by red or white wine, followed by tea or coffee.

Tony responded to toast number three and referred to the toast to grand lodge, saying he was delighted to respond not only on his own behalf, but also on behalf of his grand lodge colleagues. He referred to certain qualities of his professional life as a teacher and relayed some stories of his experiences and transposed them to life today. Most of these were of a jovial nature.

He went on to say that he felt privileged to bring the good wishes of the Provincial Grand Master Tony Harrison, to the WM, all the officers and brethren of the lodge and hoped they would have the best of health to enjoy the ensuing year to the full. Once again Tony congratulated Phil Thompson as installing master, but acknowledged the important part that John Geering had played over the past 12 months and thanked him for all his work. Tony continued by saying that he felt the lodge would go from strength to strength over the next 12 months and his hope was that the members of the lodge would have fun doing it, fun being a very important part of Freemasonry. He commented that the lodge was in good hands. He again thanked the brethren for the charity donations and made reference to the West Lancashire Freemasons’ Charity saying donations were always welcome and well applied. He also mentioned the 2017 Tercentenary celebrations.

Following the meal a raffle was held which raised £355 and was in addition to the collection plate of £105. The master’s song was sung by the junior warden Malcolm Crawley, accompanied by Keith Dickinson. Malcolm’s rendition of the master’s song was extremely well received by all present.

Tony and Andy were presented with bouquets of flowers on behalf of the lodge. On presenting the flowers to Tony, David asked him to please accept the flowers and good wishes of the brethren for Linda his lady wife, who was due to go into hospital for surgery the next morning. Tony thanked David and the brethren saying his wife would love the flowers and felt certain they would be very much appreciated. Andy also thanked the brethren saying that Kath would also love to receive them. They both thanked the WM and brethren for a most enjoyable and memorable evening. The evening was brought to a close by Jim Cartledge delivering the tyler’s toast.