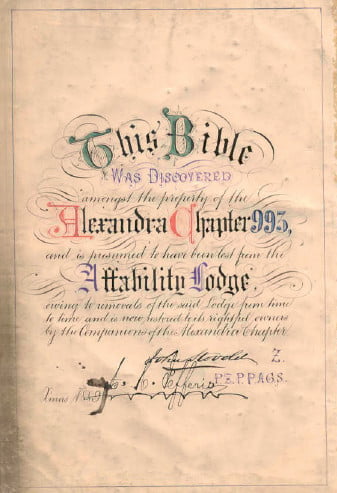 You never know what you may find in a Lodge locker, and but for the decision to amalgamate two Lodges, a unique find may have gone undiscovered for many years to come.

It was back in November 2002 that Lodge of Affability No. 317 was to amalgamate with Villiers Lodge No. 6684 (a Grand Daughter Lodge) in the Province of East Lancashire.

A decision was taken to check the contents of the Lodge of Affability, with a view to discarding duplicate Masonic material and to update its inventory. Among the items stored were no less than four Bibles.

The most interesting of them was the oldest – a Geneva Bible dated 1607. Printed on the cover of the bound book was the following inscription:


This presentation was made three years after Lodge of Affability had been consecrated in 1799. The “Breeches Bible”, as it is commonly known, is a book collector’s term for the Geneva Bible, first printed in 1560. The term derives from the reference in Genesis III, Verse 7, which states:- Then the eyes of them both were opened, and they knew that they were naked and they sewed fig leaves together, and made themselves breeches. This final word, “breeches”, being substituted for “aprons”.

The Geneva Bible owes its origin to a group of scholars who fled from England to Geneva in Switzerland to escape persecution from Queen Mary, known as the Bloody Queen of England 1553 – 1558. Upon her accession to the throne she banned the printing of English scriptures.

Being abroad, they translated an English version from Latin, using Greek and Hebrew text. The translators included such Protestant scholars of the day as John Calvin, Myles Coverdale. John Foxe and several other reformers including Theodore Beza.

The Frontispiece of the Bible states:

The Bible
that is
The Holy Scriptures
contained in the Old
and New Testament
Imprinted in London by
Robert Barker, Printer to the
Kings most excellent
Majestie

It became the first Bible to be translated into English.

There were more than 160 editions and it was printed for the last time in 1644. The key features of the Geneva Bible to distinguish it from other bibles of its time, and what made it so popular, were the extensive marginal notes that were intended to explain and interpret the scriptures for the common people. These notes run to approximately 300,000 words or one-third the length of the text of the Bible itself.

The Geneva Bible had several other features. On the advice of John Calvin, it became the first Bible to divide scriptures into numbered verses. It gives the names, order and number of Chapters of all the books of the Old and New Testament along with books entitled Apocrypha.

Maps were included, also a name and subject index. Psalms sung by the English Congregation were also included. Due to the marginal notes and superior quality of the translation, the Geneva Bible became the most widely read and influential English Bible of the 16th and 17th centuries.

It was the Bible of choice for many of the greatest writers, thinkers and historical figures of the era. William Shakespeare’s plays and the writings of John Milton and John Bunyon were influenced by the Geneva Bible. Oliver Cromwell issued a pamphlet containing excerpts from the Geneva Bible to the troops during the English Civil War.

When the Pilgrims set sail for America on the Mayflower, they took with them a Geneva Bible.

Regarding the “Breeches Bible” held by the Lodge of Affability with Villiers No 317, in addition to the details of its donor, within its pages are several other items of interest.

Inside the cover is written:

This Bible
Was Discovered
amongst the property of the
Alexander Chapter 993
and is presumed to have been lost from the
Affability Lodge
owing to removals of the said Lodge from time
to time and is now restored to its rightful owners
by the Companions of the Alexander Chapter
John Stovold Z
Xmas 1889 A H Jefferis PZ. PPAGS

Since its formation, the Lodge of Affability, up to 1929, met in Manchester in 15 meeting places. At the time the Bible was returned to its meeting place it was meeting at Freemasons’ Hall, Cooper Street, where Affability was the first Lodge to hold a meeting at the Hall after the erection of the building in 1865.

From 1929, the Lodge regularly met at Freemasons’ Hall, Bridge Street, Manchester and yet again in 2004, upon amalgamation, moved to a new address, Masonic Hall, Hemsley House, Salford.

At present, the “Breeches Bible” is the only one known to be used in the English Constitution, although in America there are believed to be two – one in Blair Lodge AM of Chicago, Illinois, which is generally thought to be the oldest Bible used in a Lodge.

The other is believed to belong to Palestine Lodge No. 181 in Denver, Colorado. Regarding Affability’s “Great Light” it is recorded that in 1932, George Walmsley presented to the Lodge the family Bible of his late father Henry Walmsley “to be used at all Lodge meetings with the exception of the Installation in order to obviate damage to the valuable Breeches Bible used for a great number of years in the Lodge”.

Since bringing the inventory up to date, the “Breeches Bible” was used in the amalgamation ceremony with Villiers Lodge No. 6684 in November 2004. The Provincial Grand Master, Peter Walthall, conducted the ceremony, being one of his last duties before announcing his retirement, On 26 April 2005, at a Regular Lodge meeting, the Geneva Bible was presented on loan to the Manchester Masonic Museum at Freemasons’ Hall, Bridge Street, Manchester, for safekeeping, and has since undergone restoration.