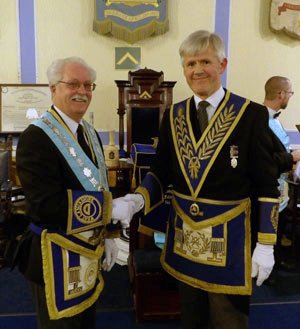 I don’t know if you’ve noticed it, but it’s rum how keen movie-goers seem to have an unquenchable thirst for action, drama, suspense, pathos and above all, a defined element of surprise; an unexpected turn of events that doesn’t follow a conventional pattern.

The installation meeting of Blackpool Lodge of Fellowship No 7692 may well have been directed by an ardent film-buff. The evening was crammed with unexpected events and references to popular movies. Even the principal protagonist, installing master Phil Houldsworth who bears a striking resemblance to Captain Mainwaring of ‘Dad’s Army’ introduced movie characters into the ritual which, in turn, prompted the representative of the Provincial Grand Master to run with the plot when conveying his congratulations to the cast.

Early scenes brought the first surprises when ballots were conducted for three joining Masons and two new candidates. In itself, that is a good start to any lodge meeting but a further twist came when two of the joining Masons were cast in leading roles in the installation ceremony.

Wayne Beacher (a name that could have been conjured up as a character in an American crime thriller) became installing junior warden and Brian Royle-Rimmer (distinctly characteristic of a leading role in a Sherlock Holmes movie) presented the working tools of an entered apprentice. Obviously, Blackpool Lodge of Fellowship wastes no time in putting new members to work!

Ian Ward who was the principal guest and representative of the Provincial Grand Master Tony Harrison was suitably impressed by the production. It isn’t often that a meeting starts with an announcement that the lodge is gaining five new members at one meeting. Ian is Chairman of South Fylde Group and was accompanied by the Chairman of Blackpool Group Peter Bentham, Vice Chairman of Blackpool Group John Turpin and secretary of the group David Cook, supported by the ubiquitous acting Provincial grand officer Jim Finnegan. 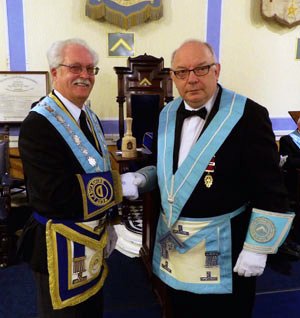 Graham Suthers (left) thanks Phil Houldsworth for an excellent ceremony.

Having warmly welcomed Ian and the other distinguished guests, Phil Houldsworth announced the feature production of the evening, the installation of Graham Suthers into the chair of King Solomon. In some respects it was a repeat performance as Graham had been previously installed in 1998, the year in which such iconic cinematic compositions as ‘Saving Private Ryan’, ‘Lock, Stock and Two Smoking Barrels’, ‘The Man in the Iron Mask’, ‘The X Files’ and ‘Godzilla’ were committed to celluloid. Co-stars of the installing team were Roger Kelly as installing senior warden, Wayne Beacher as installing junior warden and Mike Yeo as installing inner guard.

The production ran smoothly under the direction of Carl Gittins the lodge’s director of ceremonies, the first installation that he had produced since landing the role of DC. The ceremony followed classic block-buster lines and Graham was installed with appropriate sincerity and sensitivity. Oscar-winning performances were given by junior members Neil Higgins, Paul Holt and Brian Royle-Rimmer in presenting the third, second and first degree working tools respectively. Their performances were flawless and provided an insight into the high standards that were to follow.

Investiture of the officers of the lodge provided some rare scenes. Addresses not often heard added surprise elements to the script and introduced passages that will likely be remembered by many who were present. 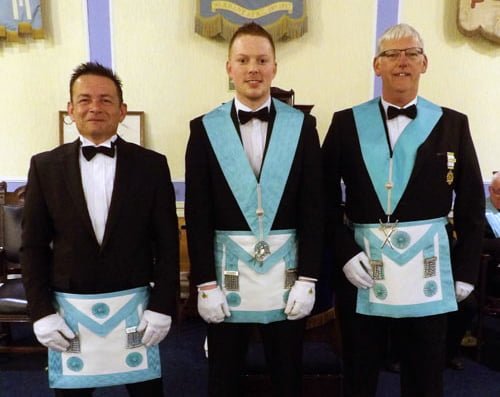 A tremendous trio of working tools presentations. Pictured from left to right, are; Brian Royle-Rimmer, Paul Holt and Neil Higgins.

There were the standard addresses of course; those to the senior and junior wardens by Roger Kelly and Wayne Beacher, both performed superbly well and with gusto. Wayne, as one of the three new joining members demonstrated how much of an asset he will be to the lodge and Roger showed that experience can always be relied on. Another frequently heard address was that to the deacons but Robert Sanderson performed it to a standard achieved by only the finest ritualists.

But it was the less frequently heard addresses that gained the edge over other installation ceremonies. Robert Sanderson provided a wonderful rendition of the rarely heard address to the newly installed chaplain of the lodge and John Turpin addressed the newly invested secretary, another piece that is not familiar to many. An off-the-cuff address to the assistant secretary by Phil Houldsworth provided a gem of humour. Far from any recognised ritual, it made reference to characters from the series of Star Wars movies, earning him the nickname of Han Solo from Ian Ward. No doubt, the moniker will stick with him for a long time to come.

‘The Force’ having been awoken by Phil, the team shifted into top gear with superb addresses to the newly installed master and the wardens by Arthur Coldicott and David Cook respectively. 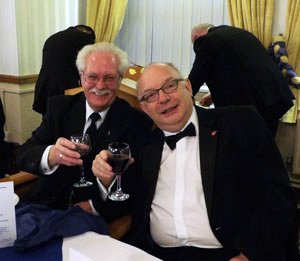 The finale of the show, as dictated by custom, was reserved for the representative of the Provincial Grand Master and Ian performed the address to the brethren like a Hollywood veteran; with zip, clarity and passion.

Rolling out the credits while conveying greetings from Tony Harrison, Ian was lavish in his praise of the cast members, saving special approbation for the three junior brethren who had presented the working tools and the installing master Han Solo!!

Redolent of an awards ceremony, the newly installed master Graham presented Ian with charitable disbursements totalling £2,080, composing of £800 to the West Lancashire Freemasons’ Charity, £300 to the Freemasons’ Grand Charity, £220 to Brian House, £150 to Blue Sky, £150 to BLESMA, £120 to RNLI, £120 to NW Air Ambulance, £20 to each of West Lancashire Freemasons’ Golf, Clay Pigeon Shooting and Bowling Associations and £160 to the Blackpool Masonic Hall Building Fund. If the ‘Force’ hadn’t already been awoken, the generosity of the lodge members would certainly have stirred it with those figures. Ian thanked the members on behalf of the recipients for their generosity. 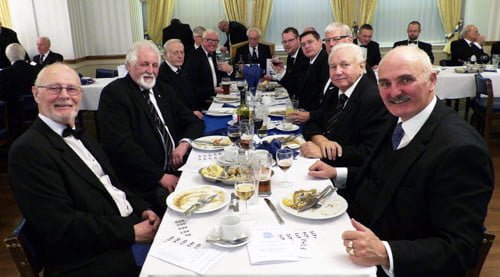 The brethren enjoyed a hearty meal and warm company.

As the meeting drew to a close, Peter Bentham in responding to the first rising commended the inclusion of unfamiliar passages in the proceedings and applauded organist Phil Bolton for the quality of the musical score that had accompanied the production.

And so it was that, in uplifted mood, the masses retired to the festive banquet to enjoy another star production. Together with a juvenile waistline, Ian Ward retains a youthful enthusiasm and an alert and enterprising eye. In his response to the toast to the grand officers, his speech complemented his jaunty physical demeanour. Light-hearted when applicable but earnest where necessary, he bestowed accolades on those who had participated in the show. Paying tribute to Peter Bentham’s devoted efforts during his tenure as Chairman of Blackpool Group; he congratulated John Turpin on his appointment as Peter’s successor and praised the work of the group’s officers. He closed by apprising his audience of current Provincial initiatives and concerns.

The master’s song was beautifully vocalised by Harry Waggett, accompanied by Phil Bolton, in sincere and charming fashion. In response, Graham thanked the team for the manner in which he had been installed and assured the members of a busy year in which he will give of his best.

At the helm of Blackpool Lodge of Fellowship, Graham has a major advantage as he may not be the ‘Godfather’ but with his two sons-in-law in the positions of director of ceremonies and assistant director of ceremonies, he is a strong contender for the title of ‘Godfather-in-law’. Graham will certainly awaken ‘the Force’ during the ensuing year.