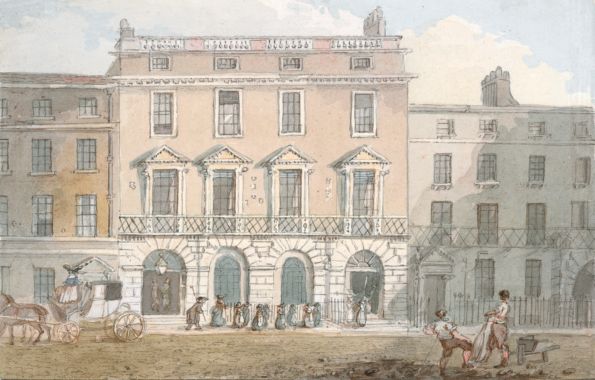 The first Freemasons’ Hall, designed by Thomas Sandby, had no street frontage but was built in the garden behind 61 Great Queen Street, a house dating from the 1650s, which was divided into two and had another small house behind it, which may have originally been a coach house. Grand Lodge retained parts of the back house as committee rooms and offices, but otherwise intended that these houses should be let to provide an income.

Since eating and drinking (and singing and music-making) were important elements of Masonic meetings and many Lodges met at this time in inns, taverns and coffee houses, it seemed reasonable to let the back house on the site to provide such catering facilities. It was here that Luke Reilly set up the Freemasons’ Tavern and Coffee House in 1775.
Trying to operate a Tavern in premises which had once been a private dwelling was not easy, and in 1788 the Tavern had to be demolished and rebuilt to a design by Sandby assisted by William Tyler, sculptor and architect of the Ordnance office in Westminster.

It became four stories high with a stone facing up to the second floor, its appearance recorded in a contemporary watercolour of the time. New tenants then took over – Michael Richold (or Richbold) and John Mollard, described as wine merchants.

In 1791 they successfully submitted plans for building a new kitchen in the garden of the adjoining house to the east (62 Great Queen Street), the lease of which had just been acquired by Grand Lodge, to replace the existing inadequate kitchen facilities.

It was the beginning of a gradual expansion of the original site that was not to be completed until the 20th century.
Richold and Mollard found it a difficult time to build up a business, as Britain was shortly to embark on an extended period of war with revolutionary France (and later Napoleon). Despite Richold and Mollard’s claim in a memorial to the Hall Committee in January 1794 that “they have brought the tavern from a state of obscurity into considerable repute” and rent increases being waived, profits remained insufficient.

They gave up their tenancy in 1801, citing in a further communication with the Hall Committee “the nature of the times (which)… has made a great alteration in the profits of…our…business”.

A fascinating picture of the Tavern business at this time is given by the catalogue of the contents of the Tavern sold at auction over several days in January 1802, a copy of which is in the Library and Museum collection. All the furniture and utensils were sold, including the table and chairs from the card room, the carpets, curtains and mirrors from the “Glee Room” and quantities of mahogany tea trays, “oriental porcelain”, “Masonic glasses”, china dishes, bowls and silver plate.

The sale also included quantities of what were described in the catalogue as “choice old wines” including more than 800 dozen bottles of “East India Madeira of Superior quality”. The “excellent old Port” was sold in lots of 10 dozen bottles at prices of around £25 per lot.

In 1808 new tenants took over. Robert Christopher Sutton, William Thorn and John Jackson Cuff all had business experience. Thorn had been the head waiter at Canonbury House and Cuff had once been an apprentice to Richold and Mollard at the Tavern, but was at the time running a small eating-house in Drury Lane. Sutton owned the Highbury Barn Tavern and was able to provide capital.

When Sutton and Thorn retired, Cuff took over the operation assisted by Hoggary, his chief clerk and Arnold, his head cellarman, both of whom seem to have participated in a profit-sharing scheme that meant that they each had an estate worth more than £1,000 when they died.

His son John Cuff joined his father in the business in 1827 and John Jackson Cuff retired to run another inn, The Old Ship, at Brighton in 1834.

On his retirement, his tradesmen held a dinner in his honour and presented him with a candelabra. When he died in November 1848, he left a fortune of more than £120,000 and his death was marked with a lengthy obituary in the Freemason’s Quarterly Review. The prosperity of the tavern under his stewardship is evidenced by the commissioning of plates and dishes printed with an image of the Tavern for use by diners.

In the early 1850s Cuff’s former clerk, Thomas Bacon, a member of the Lodge of Regularity since 1832, who had been joint proprietor of the Tavern with John Cuff, became sole proprietor, but was soon replaced by William Watson, Thomas Coggin and Benjamin Banks.

Shrewsbury and Elkington were both Northamptonshire Masons and had been members of Pomfret Lodge No 360 since 1837. When they moved to London, Shrewsbury joined the Lodge of Regularity (now No. 91) and Elkington joined Royal Somerset and Inverness Lodge No. 4 and later St John’s Lodge No. 167 in Hampstead.

Major changes occurred in the 19th century that altered the experience of eating out in London and affected the nature of business of the Freemasons’ Tavern.

Restaurants, often run by French or Swiss-Italian entrepreneurs such as Daniel Nicolas Thevenon at the Café Royal, Pagani’s in the Strand (1874), Oddenino’s and Frascati’s were established, setting higher standards with French haute cuisine and allowing for mixed dining by both men and women.

The catering industry became more commercialised, which introduced additional capital, and catering companies were able to build larger, more elaborate restaurants which could offer a wide range and price of meal. The first companies to build hotels in London were the railway companies building near their termini (such as the Charing Cross Hotel at the western end of the Strand in the 1860s), but others soon joined this trend.

The Westminster Palace opened in 1860, the Langham Hotel (Portland Place) in 1865 and the Savoy Hotel in 1889. The new hotels offered food and accommodation and tried to emulate the standards set by hotels in Paris and New York. The contemporary Langham Hotel Guide described this approach as being “an attempt … to introduce the best points of the three systems, English, French and American, the comfort of the first being amalgamated with the elegance of the second and the discipline and organisation of the third”.

All these new venues meant that there were more places to cater for the growing number of Lodges (the Café Royal was one of many that had its own Lodge room), thus competing with the Tavern.

At the same time, pressure was growing within Grand Lodge to make greater distinction between those areas used for Masonic meetings and the eating and drinking facilities of the Tavern. John Havers, as President of the Board of General Purposes, stated his view clearly, “It appears to me a disgrace and reproach that the most ancient, influential and by far the most wealthy Grand Lodge in the world should longer permit its headquarters to be used as a Tavern”.

A committee under his control embarked on an extensive rebuilding of the site, including the Tavern, which was now to have a large banqueting hall and eleven other dining rooms of various sizes with kitchens. It would retain its own entrance from the street, but there would also be direct access from the new building. The Masonic buildings and the Tavern would be made architecturally distinct.

A new company was formed in 1864 for “the purchase of the lease, goodwill, and stock in trade of the Freemasons’ Tavern”.

The prospectus for the new company proposed to raise £65,000 by the sale of shares and explained how “for nearly a century … the Grand Hall” had been used to hold “great public meetings of a large number of the political, religious, and educational societies”.

The existing tenant (David Shrewsbury was closely involved with the company) would continue to take an active part in the management of the business of the Company. It took over the tenancy in 1865, but it did not prosper despite employing the former royal chef, Charles Francatelli, as manager from 1870 to 1876.

In 1877 one of the more established commercial catering companies, Spiers and Pond, took over the Tavern. Formed by Felix Spiers and Christopher Pond, both Englishmen, as a successful catering business in the Australian gold fields and responsible for taking the first English cricket team to Australia, Spiers and Pond came to London in the 1870s, when their business expanded.

They built the Criterion Restaurant and Theatre at Piccadilly Circus in 1874 and also catered at the Gaiety Theatre Restaurant and the Theatre Royal, Drury Lane. They ran the Tavern until 1905, but no further improvements were made to the Tavern’s facilities after the rebuilding in the 1860s, and the standard of food and facilities was, by the early 20th century, once again attracting much criticism.

Frank Richardson, Grand Director of Ceremonies, noted that “the Tavern is so badly constructed, the kitchens in the wrong place and no sufficient lifts, that it is utterly impossible for any restaurateur to supply good dinners in the place”.

Neither Grand Lodge nor Spiers and Ponds were willing to pay for the necessary improvements, and the Tavern closed for several years whilst increasingly fraught negotiations with prospective tenants took place. In order to resolve this situation, in March 1909, Grand Lodge decided to spend £30,000 to put the Tavern premises in proper order including rebuilding the kitchen and enlarging the Banqueting Hall.

To mark this new era, the name of the Tavern was changed to the Connaught Rooms in honour of the Duke of Connaught and Strathearn, who was the Grand Master at the time, and agreement was reached with the Connaught Rooms Limited to take on a new lease. The managing director of the company was George Harvey, former manager of the Hotel Cecil in the Strand (and later Mayor of Holborn and MP for Kennington).
Under his leadership, the premises once more became a successful venue.