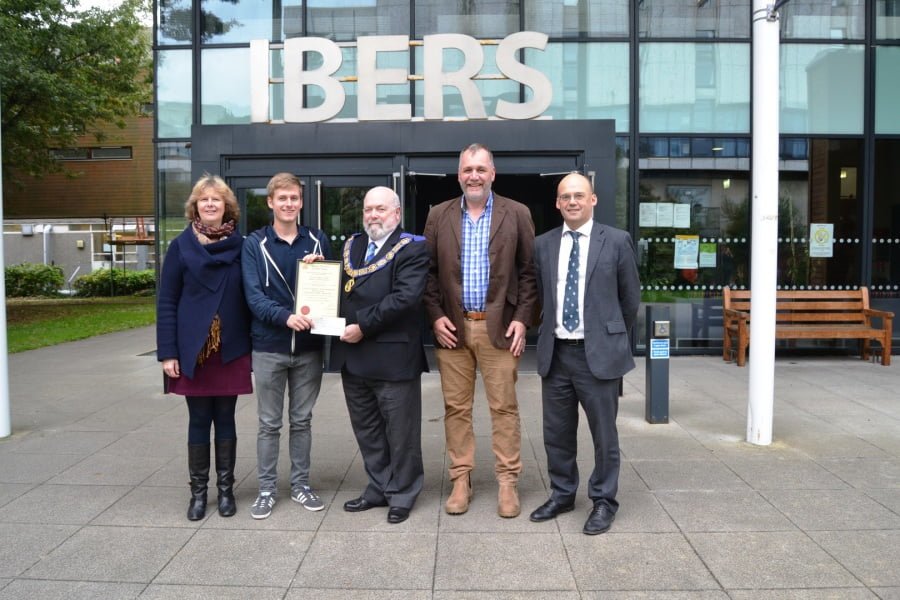 Daniel Stout is the recipient of the 2016/2017 Dr John B Lloyd Masonic Bursary Award. RW Bro Stephen Hookey, Provincial Grand Master of West Wales presented Daniel with a cheque for £1500 and a certificate to commemorate the award on Thursday 20th October 2016 at Aberystwyth University. The award is given annually by the Provincial Grand Charity of the Masonic Province of West Wales to encourage worthy students to further their education and Daniel was selected this year because of his performance in his undergraduate degree, which included prizes for his dissertation plus his agricultural experience.

Daniel is studying for an MSc in Livestock Science at The Institute of Biological, Environmental and Rural Sciences (IBERS) at Aberystwyth University. Daniel, who is from Fair Isle in Scotland, already has a BSc in Agriculture and he hopes that this additional qualification will lead to a career as an Livestock Adviser to farmers and land owners. Daniel was very grateful for the award which he said would make a big difference to his year in Aberystwyth.

Dr Mike Rose, who is Director of Learning and Teaching at IBERS, pointed out that whilst there was lots of funding available for undergraduates, students like Daniel taking additional qualifications had to find much of the funding from their own resources and bursaries such as this often make the difference as to whether good students can afford to study for Masters qualifications.