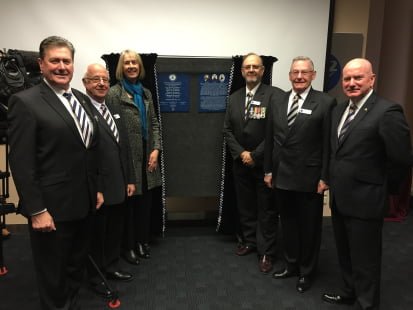 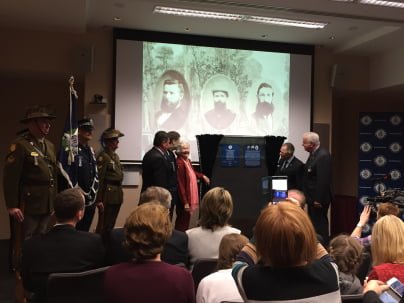 The plaque is unveiled at the ceremony to dedicate the Emergency Resuscitation Area at the Epworth Hospital to the three policemen involved in the arrest of the Kelly Gang.

A plaque dedicated to the memory of three policemen who lost their lives in 1878 has been unveiled at the Epworth Hospital in Richmond this week.

The ceremony, hosted by the Blue Ribbon Foundation, Epworth Medical Foundation and Freemasons Victoria, dedicated the Emergency Resuscitation Area in the newly constructed Emergency Department at the Epworth Hospital, Richmond in memory of Victoria Police members, Sergeant Michael Kennedy, Constable Thomas Lonigan and Constable Michael Scanlan who were murdered while attempting to track and arrest Ned Kelly and a gang of dangerous criminals at Stringybark Creek in the Wombat Ranges near Mansfield on 26 October, 1878.

Shortly after the curtains were drawn revealing the plaques, guests were offered a tour of the new emergency facility and shown where the plaques will be erected.

This is a great example of three very strong partnerships combining to deliver valuable outcomes for the wider community.

‘A True Narrative of the Kelly Gang’ by T.N. McIntyre, sole survivor of the attack has been forwarded to the Freemasons Victoria Library and Museum