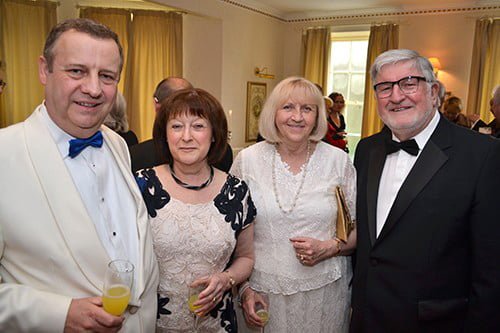 The Chorley Group held its 2016 gala at Ridgmont House in Horwich. Being set in a spectacular location, Horwich Masonic Hall was recently used to shoot an episode of ‘Last Tango in Halifax’ and proved a splendid venue for the evening.

Pictured from left to right, are: Peter and Pamela Locket welcoming Kath and John Robson

The group chairman Peter Lockett and his wife Pamela greeted the guests as they arrived with a Buck’s Fizz reception. The evening had been organised by the social committee and the committee chairman Stewart Rothwell acted as master of ceremonies for the evening.

Amongst the 83 guests was Stuart Seddon, who in May meeting of Provincial Grand Lodge is to be invested as Assistant Provincial Grand Master and will be overseeing the Chorley Masonic Group. The evening was also well supported by the group’s team of officers including recently appointed group vice chairman Peter Allen and group secretary Don Hesketh.

Following the reception, Peter invited everyone to join him and Pamela for a mouth-watering six course dinner superbly cooked and served to the usual high standard found at Ridgmont House. The meal consisted of a melon starter served with salmon, Parma ham and prawns, with chicken wellington as the main course which was followed up with rhubarb crumble and the famous Ridgmont cheese wagon.

During the meal the guests were entertained by Andrew Lockett, the son of Peter and Pamela who played a mixture of modern as well as classic pieces on the grand piano.

The entertainment did not however stop there! Following the meal, New Faces winner and Cilla Black tribute songstress, Julie A Scott took to the stage. With a huge repertoire to call from, Julie sang songs from the late great Cilla and Take That, as well as music from the cabaret era. The highlight was without doubt her rousing rendition of songs from the 1940’s with scenes reminiscent of the ‘last night at the proms’, which saw the guests waving their napkins in the air and singing along! Between songs, Julie’s banter was hilarious and had the audience crying out for an encore at the end of her set.

The evening concluded with a raffle. The prizes had all been donated by members of Chorley Group to help raise some money for the various Masonic as well as non-Masonic charities currently supported by the group.

The lucky winners drawn out by Pamela were Ann Farnworth who won a selection of Slattery’s chocolates, Helen Cope who won £50 Marks and Spencer vouchers which had been donated by Bryn Hart, Jayne Robinson who won what looked like a very well stocked hamper and finally David Parker who won a sightseeing aircraft flight.

Peter wished everyone a safe journey home following what had been without a doubt a most enjoyable evening.

The prize winners with Pamela