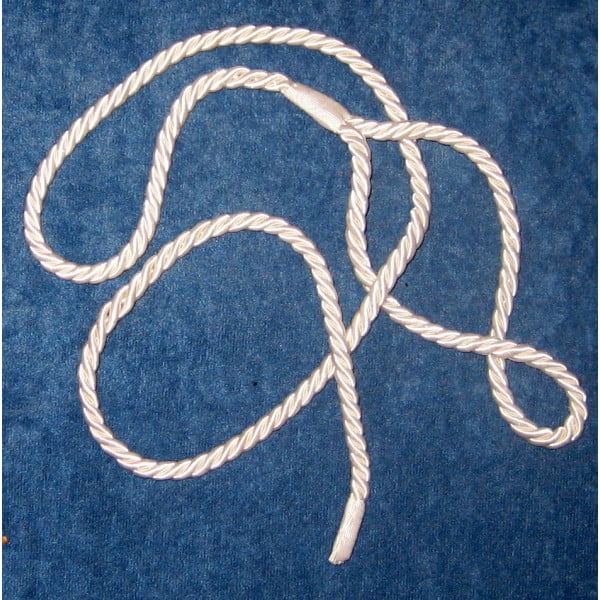 THE word Cable-tow, we are told, is, purely Masonic in its meaning and use. It is so defined in the dictionary, but not always accurately, which shows that we ought not to depend upon the ordinary dictionary for the truth about Masonic terms. Masonry has its own vocabulary and uses it in its own way. Nor can our words always be defined for the benefit of the profane.

Even in Masonic lore the word cable-tow varies in form and use. In an early pamphlet by Prichard, issued in 1730, and meant to be an exposure of Masonry, the cable-tow is called a “cable-rope“; and in another edition a “tow-line.” The same word “tow-line” is used in a pamphlet called A Defence of Masonry, written, it is believed, by Anderson as a reply to Prichard about the same time. In neither pamphlet is the word used in exactly the form and sense in which it is used today; and in a note Prichard, wishing to make everything Masonic absurd, explains it as meaning “the roof of the mouth!”

In English lodges, the cable-tow, like the hoodwink, is used only in the first degree, and has no symbolical meaning at all apparently. In our American lodges it is used in all three degrees, and has almost too many meanings. Some of our 75 American teachers—Pike among them—see no meaning in the cable-tow beyond its obvious use in leading an initiate into the Lodge, and the possible use of withdrawing him from it should he be unwilling or unworthy to advance.

To some of us this non-symbolical idea and use of the cable-tow is very strange, in view of what Masonry is in general, and particularly in its ceremonies of initiation. For Masonry is a chamber of imagery. The whole Lodge is a symbol. Every object, every act is symbolical. The whole fits together into a system of symbolism by which Masonry veils and yet reveals the truth it seeks to teach to such as have eyes to see and are ready to receive it.

As far back as we can go in the history of initiation, we find the cable-tow, or something like it, used very much as it is used in a Masonic Lodge today. No matter what the origin and form of the word as we employ it may be—whether from. the Hebrew “khabel,” or the Dutch “cabel,” both meaning a rope, the fact is the same. In India, in Egypt, in most of the Ancient Mysteries, a cord or cable was used in the same way and for the same purpose.

Its meaning, so far as we can make it out, seems to have been some kind of a pledge—a vow in which a man pledged his life. Even outside initiatory rites we find it so employed, as, for example, in a striking scene recorded in the Bible (I Kings 20:31, 32), the description of which is almost Masonic. The king of Syria, Ben-hadad, had been defeated in battle by the king of Israel and his servants are making a plea for his life. They approach the king of Israel “with ropes upon their heads,” and speak of his “brother, Ben-hadad.”

The cable-tow, then, is the outward and visible symbol of a vow in which a man has pledged his life, or has pledged himself to save another life at the risk of his own. Its length and strength are measured by the ability of the man to fulfill his obligation and his sense of the moral sanctity of his obligation—a test, that is, both of his capacity and of his character.

If a Lodge is a symbol of the world, and initiation is our birth into the world of Masonry, the cable-tow is not unlike the cord which unites a child to its mother at birth; and so it is usually interpreted. Just as the physical cord, when cut, is replaced by a tie of love and obligation between mother and child, so, in one of the most impressive moments of initiation, the cable-tow is removed, because the brother, by his oath at the Altar of Obligation, is bound by a tie stronger than any physical cable. What before was an outward physical restraint has become an inward moral constraint. That is to say, force is replaced by love—outer authority by inner obligation—and that is the secret of security and the only basis of brotherhood.

The cable-tow is the sign of the pledge of the life of a man. As in his oath he agrees to forfeit his life if his vow is violated, so, positively, he pledges his life to the service of the Craft. He agrees to go to the aid of a Brother, using all the power in his behalf, “if within the length of his cable-tow,” which means, if within the reach of his power. How strange that any one should fail to see symbolical meaning in the cable-tow! It is, indeed, the great symbol of the mystic tie which Masonry spins and weaves between men, making them Brothers and helpers one of another.

But, let us remember that a Cable-tow has two ends. If it binds a Mason to the Fraternity, by the same fact it binds the Fraternity to each man in it. The one obligation needs to be emphasized as much as the other. Happily, in our day we are beginning to see the other side of the obligation that the Fraternity is under vows to its members to guide, instruct, and train them for the effective service of the Craft and of humanity. Control, obedience, direction or guidance these are the three meanings of the cable-tow, as it is interpreted by the best insight of the Craft.

Of course, by Control we do not mean that Masonry commands us in the sense that it uses force. Not at all. Masonry rules men as beauty rules an artist, as love rules a lover. It does not drive; it draws. It controls us, shapes us, through its human touch and its moral nobility. By the same method, by the same power, it wins obedience and gives guidance and direction to our lives. At the Altar we take vows to follow and obey its high principles and ideals, and Masonic vows are not empty obligations—they are vows in which, a man pledges his life and his sacred honor.

The old writers define the length of a cable-tow, which they sometimes call a “cable’s length,” variously. Some say it is seven hundred and twenty feet, or twice the measure of a circle. Others say that the length of the cable-tow is three miles. But such figures are merely symbolical, since in one man it may be three miles and in another, it may as easily be three thousand miles—or to the end of the earth. For each Mason the cable-tow reaches as far as his moral principles go and his material conditions will allow. Of that distance each must be his own judge, and indeed each does pass judgment upon himself accordingly, by his own acts in aid of others.

Recently a man of science said that if the earth were held in its orbit by iron bars, they would have to be close together, not more than a foot apart, covering the entire surface. If, he said, these bars were twisted together into one gigantic cable, he doubted if it would be as strong as the invisible bond, or cable, by which the earth is held to its vast orbit. It was a striking way of teaching us that the cables that reach the longest and hold the strongest are invisible, and formed of forces with which men do not reckon, just because they are noiseless and unseen.

Just so, when the cable-tow of each Mason is joined with that of every other Mason, and all are united in one Cable of Kindness, it makes a bond of brotherhood the might of which no mortal can measure. It helps to hold. the world together. It holds when other ties break, as it did in the Civil War in America. It is one of the holiest assets of humanity—a far-stretching Tie, mystical and unseen, yet more unbreakable than bands of steel, in which the obligation and loyalty and love of each of us is a strand.

There is an unseen cord that binds

The whole wide world together;

Through every human life it winds,

This one mysterious tether.

There are no separate lives; the chain

Too subtle for our seeing,

Unites us all upon the plane of universal being.

Such is the Divine cable-tow by which the world is held in its moral orbit. To discover that cord running through our own lives—your life and mine—uniting us with all the seekers after truth, all lovers of right, all servants of God and man, is the mission and blessing of Masonry. What is the length of our cable-tow? Who knows how far it reaches?