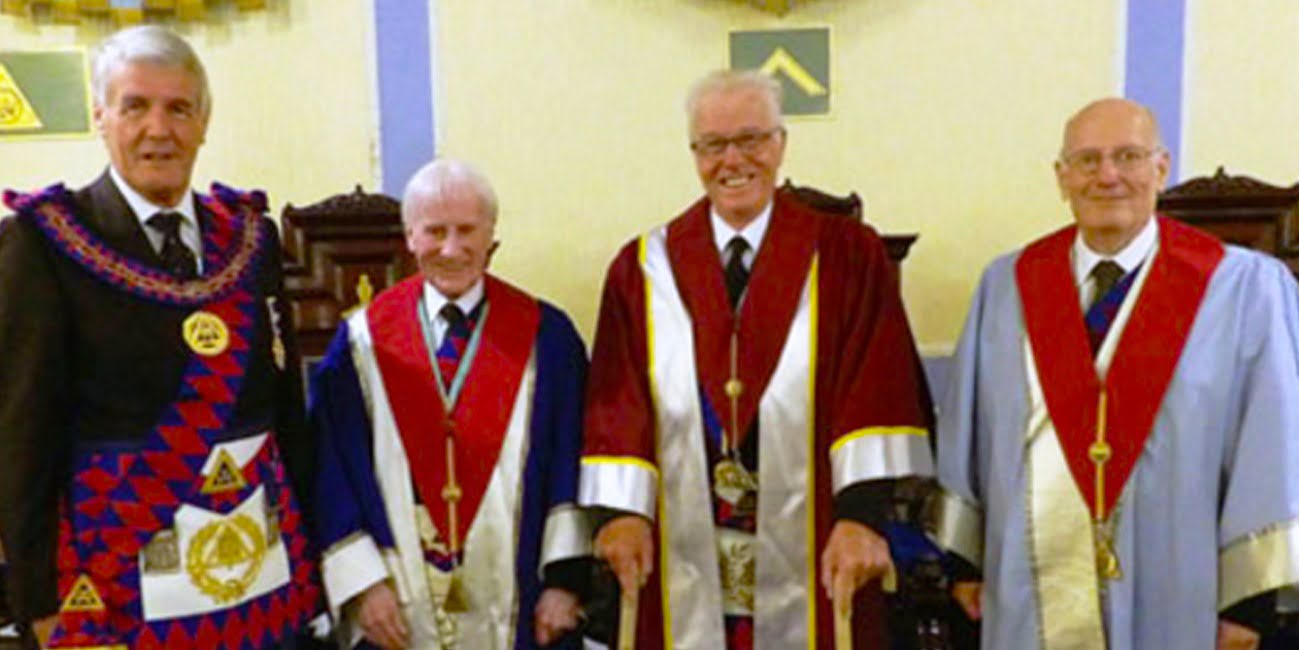 It was the hottest and clammiest day of the year when the masses gathered at Blackpool Masonic Hall for the installation convocation of Senatores Chapter of Installed First Principals No 8966. Despite the rather oppressive heat however, there was a general atmosphere of leisured cosiness.

It is worthy of record, in the light of after events, that at the beginning of the evening, it was the general expectation of the populace that the ceremony was to be rather special. And their expectations were fully realised. One could not have wished for a better example of how to install three new principals. Granted, as all three had previously held the offices to which they were assigned, an abridged ceremony was all that was required. But this did not reduce the quality of the ritual.

The number and quality of luminaries that were in attendance was such that it is unlikely that a more appropriate collective noun than a plethora could be selected in recording their presence. Filing into the chapter room, the list read like an extract from the ‘who’s who in Royal Arch Masonry’.

With such an exhaustive list of high-ranking officers casting their critical eyes over the ritualists, one might have expected the performers to show some degree of nervousness, even amongst such experienced Royal Arch Masons. But not a twitch of trepidation was evident. As cool as oysters on ice, the three principals David Randerson, Stuart Thornber and Ian Ward, installed their respective successors in supreme style. They are three Masons of blue-chip stock and proved it in magnificent manner.

Having tried to persuade Paul Renton to accept the sceptre of the chapter and finding it returned in a most gracious manner, first principal David Randerson had no alternative but to continue as the main protagonist. As may be expected of one who always appears to be in total command of a situation whilst at the same time achieving an air of spontaneity, David installed Geoffrey Pritchard as the new first principal with eloquence beyond the ordinary. Throughout the performance, David retained that calmness, confidence and clarity that has gained him the reputation of an accomplished ritualist. Simply put, he makes it look so easy.

Stuart Thornber, acting as understudy to Peter Bentham, who unfortunately was unable to attend due to his awaiting admission to hospital for a back operation, is one of those people who lives by an ethos of whatever he does, it must be done with determination and to perfection. And that is exactly what Stuart provided in installing Trevor Drabble into the second principal’s chair. Stuart is a chap who is always immaculate in the manner of presenting himself and attaches a similar standard to his rituals.

A table full of major dignitaries.

It was then the moment at which Ian Ward was to install Tony Hough as third principal; that moment at which he would wish for eloquence and oratory purity. From the moment he started, it was crystal clear that he was to be rewarded with brilliance. His performance was full on with total conviction. A delight to hear, it left a strong impression on the attending populace.

Having assembled all three new principals in their chairs of office, it was time for lesser mortals to recite the customary robe addresses. Gordon Ivett duly presented the scarlet robe address to first principal Geoffrey Pritchard. Arthur Coldicott recited the purple robe address to second principal Trevor Drabble and Martyn Jones brought up the rear with his blue robe address to Tony Hough.

At this juncture, it was the turn of Paul Renton to demonstrate his skills as a ritualist. Arriving at the designated spot, whither the Provincial Deputy Grand Director of Ceremonies had escorted him; Paul addressed the companions of the chapter, performing his piece with the poise and eloquence of a seasoned Thespian; clear, confident and sincere. It had the hallmark of one who radiates respect of the companions and earns respect in return.

When the installation ceremony concluded, Paul arose to convey the greetings of the Grand Superintendent Tony Harrison, wishing the three newly installed principals a happy, successful and above all, a healthy year in office, while lavishing praise on the quality of the ceremony. His enjoyment of the day was clearly evident by the sincere and munificent approbation he extended to the installing principals and companions.

Geoffrey Pritchard (left) puts the butter on the asparagus in his after-dinner address while Neil MacSymons remains in attendance.

Geoffrey Pritchard, as first principal, immediately and efficiently took charge of the proceedings with the enthusiasm and gusto of a Jack Russell terrier welcoming a long-lost master. When charged with a job to do, Geoffrey is a man not disposed to hanging about. In response to Paul’s words, Geoffrey eagerly arose to present Paul with a cheque for £350 for the West Lancashire Freemasons’ Charity – the only problem being that he had left it in his other jacket pocket!!

After the success of the ceremony, the ensemble retired to the lounge bar to claim their liquid rewards before sailing into the festive banquet in carefree mood and getting their noses down into the delicacies with will. The offerings were greeted with unanimous approbation; a ‘grade A’ butternut squash soup, a wholesome chicken breast with sage and onion wrapped in bacon, followed by a calorie-rich sticky toffee pudding that Gordon Ramsey would have been proud to sponsor and all sluiced down with tea or coffee. It satisfied them to the core.

Stuffed to the gills and feeling tickety-boo, the assembled throng settled down for the traditional sequence of speeches that accompany such gatherings. As would be expected, Paul Renton was first to speak, in response to the toast to the officers of Supreme Grand Chapter. In an inspirational address, Paul compared the abridged ceremony of the evening with the highly elaborate traditional ritual of the Bristol workings, circulating photographs of by-gone ceremonies to illustrate the point. He went on to encourage the companions to consider forming a demonstration team to undertake initiatives such as the Talking Heads and Enhanced Exaltation displays, feeling that there are no better qualified companions than those in a chapter of installed first principals to maintain and promote the interests of Royal Arch Masonry.

Rising to propose the toast to the three principals, David Randerson in his usual relaxed manner paid tribute to the dedicated work of each of the three principals, saying that they provided an ideal collaboration of skills and qualities. Referencing Tony Hough’s unceasing work on the Provincial Hall’s committee, Trevor Drabble’s unparalleled character of a perfect gentleman and Geoffrey Pritchard’s unrivalled oratory skills, David was unrestrained in his admiration of them.

It was then Geoffrey Pritchard who responded on behalf of the three principals and as is predictable with Geoffrey, he was his usual witty and entertaining self; the evening’s butter on the asparagus so to speak. It is Geoffrey’s aim to enliven, as far as lays within his power, any environment in which he finds himself. He likes to give service with a smile and that is exactly what he dished up. No finer conclusion to the day could have been envisaged.