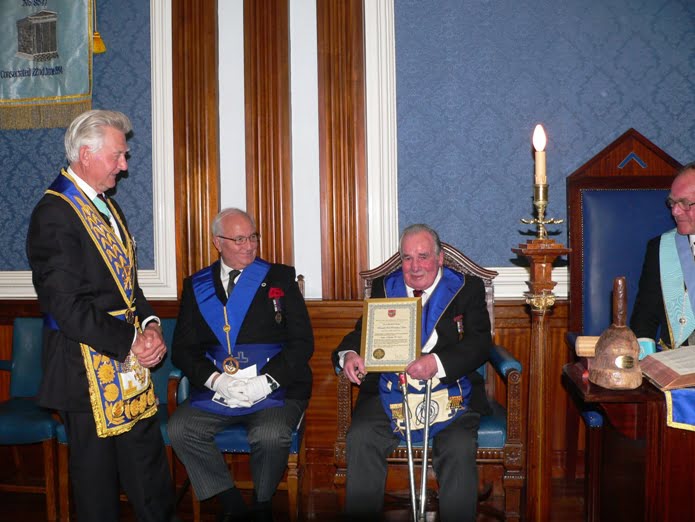 1st June saw the 89th Regular and 22nd Installation meeting of Temple of Athene Lodge No. 9541, the Masonic Research Lodge of the Province of Middlesex.

After presenting a paper on St Albans Cathedral at the last meeting, W. Bro. George Laverick, PGStB, ProvGO (Herts), was balloted for and became a joining member of the Lodge.

After Twenty-Two years membership, and persistent nagging over the last few years, W.Bro. Michael Le Gray, PSGD, PAPGM, one of its Founders, finally capitulated and was Installed as the 22nd Master.

His Inaugural Paper was entitled “Temple of Athene No. 9541; a Tribute to Who, Why, Where and When” which gave the story behind the Founding and Consecration of the Lodge at Sion Park, Brentford, disclosing some previously unknown facts, and then providing some vivid background of some of the Founders, particularly our Founding Secretary, Ronald J. R. Hart, PPrJGW, SLGR, PPrJGW (Suffolk).

Immediately after the talk, and as a complete surprise, Ron was presented with his 60 Years in Freemasonry Certificate by RW. Bro. Roger Croome QPM, PProProvGM, who eloquently supplemented Michael’s presentation with Ron’s awe-inspiring Masonic history.