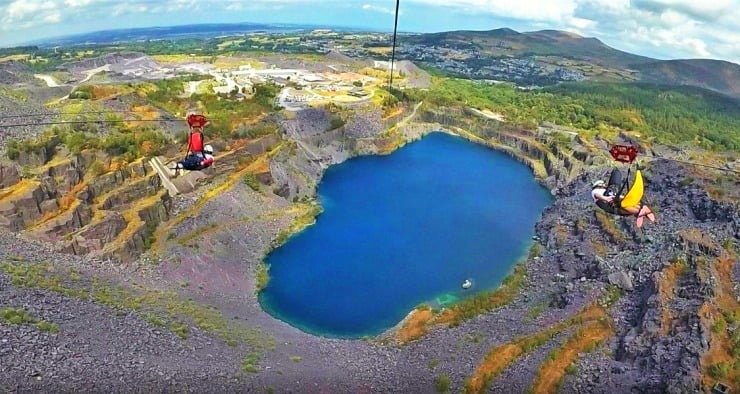 Sometimes it just needs a good cause, some crazy ideas and then loads of enthusiasm to make something worthwhile happen – which is what happened when 60 Surrey Freemasons, alongside family and friends, went down the world’s fastest zip wire and raised £35,000 for charity

They came together in Snowdonia on Sunday 15th July 2018, to take part in the fifth, and final, of their ‘Big Five Challenge’, in support of the 2019 Festival Appeal for the Royal Masonic Benevolent Institution.

As if abseiling down the spire of Guildford Cathedral last year was not crazy enough, this year’s challenge was for 60 Surrey Freemasons to ride Velocity 2, which is also the longest zip wire in Europe.

Reaching speeds of over 100mph during the 1,555 metre descent over Penrhyn Quarry in North Wales, this was to be a white-knuckle experience like no other. Jumps, as they’re called, were in groups of four, with the first group led by Surrey’s Provincial Grand Master Ian Chandler.

Colin Pizey, one of the Surrey Freemasons taking part, said: ‘The zip wire flight down was amazing. As you descend across the quarry lake, perceptions of speed just melt away and you feel like a bird gently gliding on the wind. Then the ground and end-point accelerate towards you, before being suddenly braked to a halt and gently lowered back to the ground.’

As in every instance, events like this zip wire challenge do not happen without a champion behind the scenes, to organise, liaise, inform and coax all parties towards a successful conclusion. In this instance, the champion was Terry Owen, a seasoned Surrey mason who had previously organised 15 or more fundraising events.

Terry said: ‘This was the most challenging event I’ve ever organised, but it could never have happened without everyone else stepping forward to support, take part or sponsor us.’

Despite some challenging journeys, everyone who promised to participate was there, enabling the zip wire challenge to raise over £35,000. David Olliver, who coordinates Masonic charity events in Surrey, said: ‘This was one of the biggest and most successful Provincial charity fundraising events ever.’