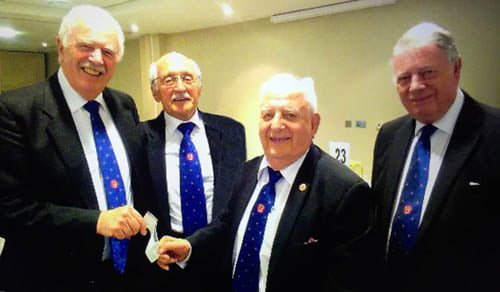 The closure of Sure and Stedfast Lodge No 9326 was not the final act of this former Boy’s Brigade lodge at Liverpool. Renowned for their generosity of spirit across the years, the members on closure settled all bills, ensured a provision to lodge widows and contemplated where the residue would be best placed. It was agreed to make two pecuniary donations, the recipients chosen being Liverpool Masonic Hall and the Kindred Lodges Association.

The first of these donations was earlier in the year at Hope Street, when James Kontzle presented a cheque to the Chairman of Liverpool Masonic Hall Committee, John Roberts, with the then group chairman Bob Povall, and Mike Winterbottom.

The role of Liverpool Masonic Hall and why this was chosen as a beneficiary is self-evident while the Kindred Lodges Association (KLA) merits a little explanation. It was formed in 1952 to encourage Masonic lodges formed by, or including Masons who are, or were, involved in youth work to link together. Membership of the KLA is available to existing Freemasons either through being a member of a subscribing lodge, or as an individual associate member. Whether as a member or an associate member, you have the same rights and privileges due to all Masons with the ability to attend any festival meeting of the association. The prime activity, other than encouraging inter lodge visiting, is to hold two festival meetings each year. The dress for these meetings is the uniform of the youth organisation for those entitled to wear it.

It was at a festival meeting when the second charitable donation was presented by John Bruffell, accompanied by Dave Crowley, where on behalf of the former Sure and Stedfast Lodge, they presented their cheque to Stephen Gough, President of the KLA. The meeting was hosted by Lodge of Unity, Peace and Concord No 316, London, at their home in Great Queen Street, which lodge incidentally both John and David are members of. This lodge is the installed masters lodge for the Kindred Lodges Association and its purpose is to stimulate, encourage and assist the development of local and national links between Freemasonry and youth organisations and to act as a catalyst for, and to support the founding and development of member lodges of the Kindred Lodges Association.

The history of the Lodge of Unity, Peace and Concord has a fascinating history which is inextricably linked with that of the 2nd Battalion, The Royal Scots (The Royal Regiment). The Royal Scots (The Royal Regiment) was the oldest regiment in the British Army and as such, was the senior infantry regiment of the line. It was raised in 1633 when Sir John Hepburn, under a royal warrant from King Charles I, recruited 1,200 men in Scotland. The first battle honour awarded to the regiment was Tangier 1680, since then a further 148 were gained in a history which involved them in almost every campaign the British Army has fought; the last awarded being Gulf 1991. On 28 March 2006, 373 years to the day since its formation, The Royal Scots merged with the other surviving Scottish infantry regiments to form The Royal Regiment of Scotland. 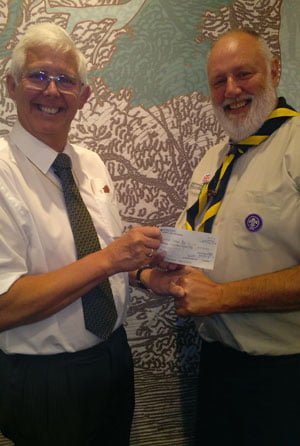 In 1686 the regiment was divided into two battalions and in 1732 the Grand Lodge of Ireland granted its first travelling, or ambulatory, warrant – to which the number 11 was subsequently assigned – to the 1st Battalion. Five years later, on 26th October 1737, the Grand Lodge of Ireland issued to the 2nd Battalion the warrant No. 74, also ambulatory. Lodge No 74 travelled with the 2nd Battalion, spending little time at home. In 1759 the lodge left a copy of its warrant to brethren in Albany, New York. On this authority, the brethren met as a regular lodge until receiving their own warrant in 1765. To this day, members of what is now Mount Vernon Lodge No 3, under the Grand Lodge of New York, consider themselves to be the oldest lodge in New York.

In 1801, while the 2nd Battalion was stationed in Gibraltar, HRH Prince Edward, Duke of Kent, was appointed Colonel of the Regiment. It is believed he became a member of Lodge No 74 at this time, some years before his key role in the union of the two Grand Lodges of England. In 1807 the lodge moved with the 2nd Battalion to India but left behind its warrant. The members petitioned the ‘Moderns’ Provincial Grand Lodge of India for a new warrant and on 1 September 1808, was issued with that from the suspended Lodge of Unity, Peace and Concord No IX (local), No 574 on the roll of the ‘Modern’ Grand Lodge of England, as an ambulatory warrant. It is from this warrant that the lodge’s current name and seniority derives. Quite why the brethren did not apply to the Grand Lodge of Ireland for a replacement warrant is not known.

Over the intervening years the lodge has been renumbered, first to 593 (in 1814), then to 396 (in 1832) and finally to 316 (in 1863). It has also had cause to apply for new warrants on two occasions. First in 1833 when it left India and later in 1949 when the 2nd Battalion was disbanded. On this latter occasion the ambulatory warrant was surrendered and a renewed warrant was issued, reflecting the lodge’s status as a stationary civilian Lodge.

When it became a stationary civil lodge in 1949 this venerable lodge held the unique position of having attained the longest span of uninterrupted existence accorded to any military ambulatory lodge, and was the last of the military lodges in the English constitution and the oldest travelling army lodge extant.

In 1908 the lodge was granted a centenary warrant but attempts to obtain a bi-centenary warrant have so far failed, due to a break in meetings between 1935, when the 2nd Battalion was posted to Lahore, and 1938 when it moved to Hong Kong. In 2013 the lodge faced the possibility of having to surrender its warrant. Its membership had declined and there was little possibility of finding new candidates. However, at the suggestion of the United Grand Lodge of England, the Kindred Lodges Association made contact with the lodge and asked that the lodge become the Installed Masters Lodge for the KLA. In 2014 the lodge entered the latest phase in its almost 300-year history as the Installed Masters Lodge for the Kindred Lodges Association. 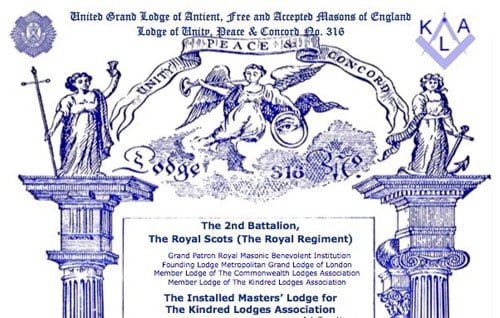