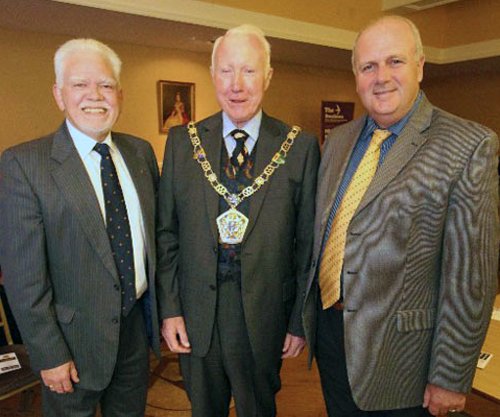 Members of South Fylde Group were pleased to welcome the Mayor of Wyre Council, Councillor Tom Balmain and his wife, Mayoress Mrs Alene Balmain to their very successful sixth ‘Giving Day’ at the Masonic Hall, Market Square, Poulton-le-Fylde. With an attendance of nearly 90 people and several charities setting up and sharing stalls to demonstrate how they distribute the money donated, an amazing event was anticipated. This expectation was satisfied by an excellent sum of over of £45,000 being raised by South Fylde Group lodges and chapters during the previous year. This sum was enhanced by donations from other local allied degrees in Masonry.

During the event many of the charities being supported sent a representative to explain how they used the funds donated to them, at the same time explaining what their organisation’s aims were. Most of the charities represented had set up stalls with posters and explanatory pamphlets which describe their activities.

This year a team from the Blood Bikers charity showed off their latest delivery motorbike. They explained that besides delivering emergency blood supplies, they also delivered other commodities such as plasma, tissue for testing and several other medically related products.

As ever, cancer research along with cancer treatment and relief, accounted for well over £4,000 of the grand total; Trinity Hospice, Brian House, Cancer Research and the Rosemere Foundation again being examples of national and local cancer groups in receipt of donations.  Various children’s organisations proved to be major beneficiaries with the scouts receiving £1,450 while others, including schools and sports clubs, sharing £2,950.

Ian Ward explained the varied work of the West Lancashire Freemasons’ Charity. This charity had been created by amalgamating several smaller foundations, thus improving services to all the beneficiaries. The total amount donated to this charity proved to be £20,440. A similar amalgamation is in process in national Freemasonry. Early donations to support this new initiative, to be known as the Masonic Charitable Foundation, amounted to £1,816.

Tea, coffee and biscuits were provided for all attendees and visitors were shown around the building by David Winder. He explained the significance of certain items in the lodge room and afterwards responded to several questions. He explained the high cost of maintaining the Masonic halls at Poulton-le-Fylde and St Anne’s, which were supported by donations amounting to £2,150.

The money donated was accumulated by a combination of funds collected from lodge meetings, raffles, social and sporting events. One recent event involving group members was a Murder Mystery Night, from which £816 was donated to the Masonic Charitable Foundation.

David Winder wound up the presentations by thanking everyone for their attendance and hard work in promoting what had been a very successful event, including the representatives who had attended from the various charities. He particularly praised the work done by group charity steward Dave McKee, who coordinates the charitable donations from all lodges and chapters and presents detailed reports, including the guide of donations produced for this event.

Councillor Tom Balmain concluded the meeting by saying what a pleasure it was to attend such a splendid event and congratulated the Freemasons on their work and generosity on behalf of the community. He wished everyone involved every success in their efforts to improve the lives of those less fortunate in society.

Dave McKee added: “It was a wonderful event and very rewarding to see so many representatives from the charities in attendance. It was particularly pleasing to see that this year’s donations had reached a record of £45,000.”

The Mayor and Mayoress of Wyre with all of the charity representatives, group and lodge officers