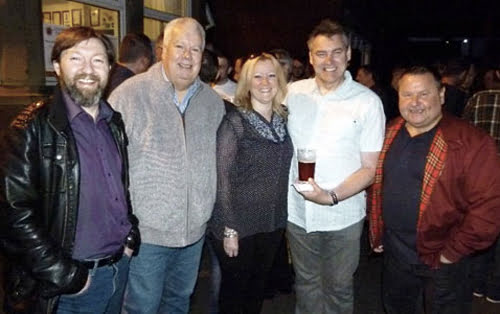 The season of strawberry teas is upon us; with gentle and refined conversation and a plethora of aromatic teas, finely attired dignitaries consuming plentiful quantities of cakes, buns, and cucumber sandwiches; a string quintet playing classical music from one corner of the garden, all far from the madding crowd.

Wait just a minute! We find ourselves in Strawberry Gardens. All chance of leisurely conversation eliminated by the rock band strutting their stuff in the marquee; copious quantities of burgers being washed down with so many varieties of beer that even the South Fylde brethren were spoilt for choice. It was a good job therefore that the said brethren were in attendance to help shift it all.

On a bright spring evening the Fylde Sky Blues gathered with their friends to enjoy a convivial evening at the Beer Festival, staged in the grounds of the Strawberry Gardens pub in Fleetwood. On this occasion, the arrangements for the Sky Blues, (and a handful of darker blues too), were efficiently made by Geoff Diggles of Anchorsholme Lodge No 5854. The evening was a great success with over 40 brethren and guests attending, to the obvious satisfaction of Geoff. Isn’t it great when a plan comes together?

Travel arrangements from the southern end of the Fylde coast were facilitated by the promotion of South Fylde Group Chairman Ian Ward to the elevated rank of ‘acting grand chauffeur’ for the evening. It was no surprise to find John Conroy, master of Fairhaven Lodge No 5076 being supported by Melvyn Gray and Terry Stevens-Lewing, (aka Mel and Tel) and a few more as well.

Masters of lodges were well represented on the evening with Michael Tax, newly installed master of North Shore Lodge No 7916, recovering from a very successful enthronement. Graham Kenyon, master of Brotherhood Lodge No 3967, who was one of the last to leave having enjoyed a ‘brilliant night.’ Joe Codling, master of Blackpool Lodge of Integrity No 5864 and Patrick Dwyer master elect of the Lodge of Fidelity No 1256 also enjoyed the refreshments and the music.

Baines Lodge No 7844, as ever, were there in force, supporting John Lee, newly appointed senior warden of the Province of West Lancashire. John was quick to praise the work of Geoff Diggles for his organising skills and said that he was ‘overwhelmed’ by the support from all parts of the Fylde.

There were some distinguished visitors present, including Vice Chairman of South Fylde Group John Robbie Porter; Secretary of North Fylde Group Alan Lock; Provincial Grand Steward Tony Rigby and adding beauty and sparkle was Sarah Spencer with her partner Ken Greenwood, master of Tithebarn Lodge No 8446. Many boogied on until after midnight. With the last tram looming, your correspondent ensured that Michael Tax arrived at the tram stop in time, while others contemplated the cost of taxis to destinations as far afield as Kirkham. Everyone agreed that it was worth it and were resigned to suffer a ‘slight headache’ in the morning. 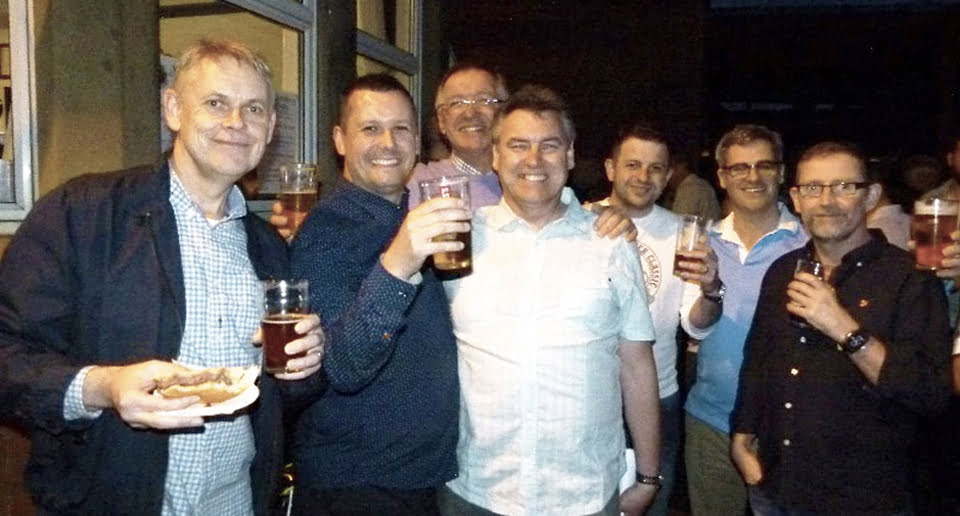 Watch out for further Sky Blue events. One date for the diary is a question and answer session with Assistant Provincial Grand Masters Harry Cox and David Winder at Blackpool Masonic Hall, on 23 September 2016.