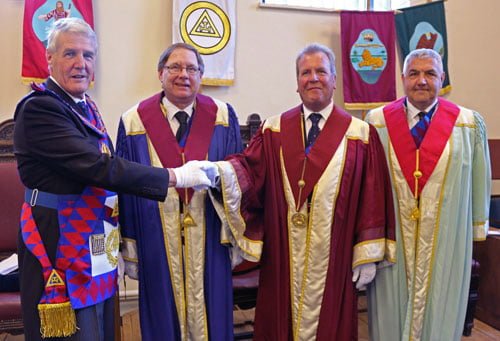 The installation ceremony of Preston’s Fraternity Chapter No 4072 saw Steve Croasdale installed as its first principal. The chapter had as its principal guest the Second Provincial Grand Principal Paul Renton. He was accompanied by Assistant to the Provincial Grand Principals Ian Cuerden and Preston Group Chairman Steve Bolton. They were supported by Provincial Deputy Grand Director of Ceremonies Neil MacSymons and acting officers, Paul Astley and Gowan O’Hagan.

The visitors witnessed an excellent ceremony with Steve Croasdale installing his successor, John Holt into the second principal’s chair. Huw Jones, in turn, installed Steve as his successor, as the first principal of the chapter. Unfortunately, due to a family illness, the third principal elect Rick Whelan was unable to be present. Therefore, for the purposes of the ceremony, John Stansfield was invited to stand in as third principal at the appropriate moment. As neither of the principals elect had held their impending offices before, they were each installed in full form.

The ceremony commenced with John Holt, second principal elect, being presented for installation by the chapter DC Malcolm Clifford. John was reminded of the duties of a principal of the chapter by Steve as second principal before being invited to recite his obligation. The scripture reading was given by John Whittall and the prayer by John Stansfield.

During the appointment and investiture of the chapter officers, the invested charity steward Alan Gordon was addressed by the group charity steward Vic Parker. The installation ceremony concluded with the address to the chapter companions given by the principal guest Paul Renton.

Paul went on to bring the congratulations and best wishes of the Provincial Grand Superintendent Tony Harrison, in particular congratulating the work of Huw Jones in installing his successor into the first principal’s chair and Tony went on to thank him for all the work he had done during his year in office. The first principal then had the pleasure of presenting two cheques; the first to the value of £63, in support of the West Lancashire Freemasons’ Charity and the second to the value £50 to the Freemasons’ Grand Charity.

The work in the chapter concluded with Joe Collier presenting Huw with a past first principal’s jewel as recognition of his time in the principals’ chairs.

Later in the evening, in his response to the toast to the grand officers, Paul began by congratulating all those who had taken part in the ceremony. He continued by thanking the chapter scribe Ezra Bob Cadman, for his communications and PrDGDC Neil MacSymons for all his support during the year. He congratulated Malcolm Clifford on his recent promotion in the Royal Arch. Congratulations also went to Joe Collier and Ronnie Holt who had both recently celebrated 50 years in the Royal Arch.

Paul went on to thank the chapter companions for their charitable donations made earlier, commenting that charitable giving generally comes from the Craft lodges; to receive donations from chapters is a bonus indeed. Turning to the Royal Arch ceremonies, Paul questioned and reminded the companions of the meaning and symbolism of some of the words hidden within the ritual, closing his comments by leaving the companions with plenty of food for thought.

He suggested that small chapters should help one another by attending each other’s meetings and if necessary, offering support with some of the ritual to enhance the occasion for candidates. To this end he encouraged chapters to adopt sections of the enhanced ritual that has been demonstrated round the Province in recent months. Paul concluded his response by reiterating the words of the Grand Superintendent, encouraging the companions to, above all, continue to enjoy their Royal Arch Masonry.