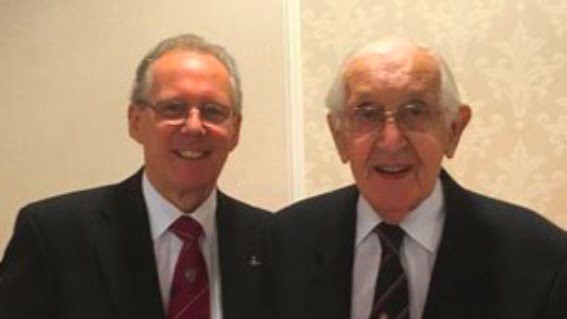 Sadly Stanley was unable to celebrate his Golden Jubilee in the Holy Royal Arch in his mother Chapter of  Faith No 484 in May owing to illness, however, the companions did celebrate Stanley’s  50 years in Royal Arch Masonry in his absence. 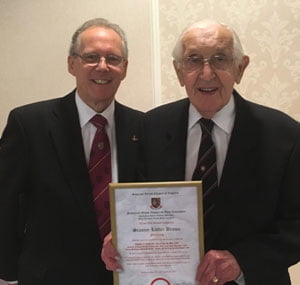 Ian presents Stanley with his certificate to mark his 50 years of Royal Arch membership.

Stanley was born on 24 July 1924 in Ashton-in-Makerfield. He was educated at St Thomas’ Church school and Ashton Grammar School. He left school at 16 and started work in the planning department  at the Burtonwood Air Depot. In 1941 he joined the Air Training Corps. In 1943 he transferred to the Fairey Aviation Company in Warrington when the Americans took over Burtonwood Air Base. At the end of the war he was a Flight Sergeant.

In November 1945 he moved to metropolitan Vickers Engineering Company in Trafford Park. In August 1950 he joined Pilkington Brothers in St Helens as technical Sales Assistant becoming Sales Manager before moving to the Group Supplies Department in 1971 as Energy Buyer. Stanley retired from Pilkingtons in 1984. In September 1948 he married Edna Sixsmith at St Thomas’ Church in Ashton. They have a family of one son, two daughters and eight grandchildren.

On 13 March 1963 he was initiated into Bryn Lodge No 6553 and was installed as WM on 11 February 1976. After completing his year as WM he became the founding Secretary of Ashton Trinity Lodge. In 1980 he was appointed as a Provincial Steward and promoted to Past Provincial Senior Deacon in 1984. In 1990 he received a further promotion to past Provincial Junior Grand Warden and in 1996 to Past Senior Grand Warden. During this time he joined Quingenti Lodge No 8156 in 1980 and Ancient and Loyal Lodge of Installed Masters No 9762 in 2003.

Stanley has also been very active in Bryn Masonic Hall as Secretary from 1970 until 1990 and as Vice Chairman and Chairman from 1991 to 2000. 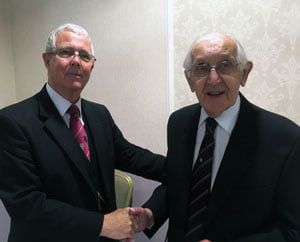 Happily Stanley’s health has improved recently and he was able to attend Ashton Masonic Hall to join with  the members of Skelmersdale and Waterloo Chapter No 1380 (The Bikers Chapter) for breakfast.

Following a delightful ‘petit dejeuner’ known as a full English in Wigan! The breakfast also attended by a few ladies and the Assistant to the Provincial Grand Principals, Ian Cuerden. Ian asked all to remain in the dining room prior to the convocation and indicated his desire to pay a small tribute to Stanley, a senior Royal Arch Companion who holds the very high rank of Past Provincial Grand Scribe Ezra and a wonderful servant of Freemasonry, the Province, the Wigan and District Group and also appropriately Ashton Masonic Hall.

The proceedings were informally conducted with a few reminiscences of many happy years gone by  especially Ian’s recollection of Stanley’s proud wearing of a carnation as a long time  Provincial Steward likened to the red rose always worn by a previous Grand Superintendent Alan Ferris.

Greetings were given by the Most Excellent Grand Superintendent Tony Harrison in the form of an illuminated citation expressing his personal congratulations to Stanley, it was read by the Group Chairman Geoffrey Porter and duly presented to Stanley.

At his 50th celebration in the craft in Bryn Lodge No 6553 in 2013 the lodge’s song duly adapted was sung,  but on this occasion the celebration was concluded by a truly spontaneous and  rousing chorus of ‘He’s a Jolly Good Fellow’ followed by a standing ovation for Stanley’s short and happy  speech of response.

Following this delightful interlude the convocation of the Bikers Chapter witnessed a double exaltation of Bro’s Lee Walters and Brian Jaffrey beautifully worked by members of the chapter assisted by companions of various chapters from within the Wigan and District Group.

The chapter which had only recently begun meeting at Bryn also elected officers for the following year and tabled propositions for future candidates. As is the norm in this chapter formalities were reduced to a minimum and the ‘Bikers’ set off  around lunchtime on their magnificent  machines  to explore previously quiet backwaters of  Cheshire and rural Shropshire!