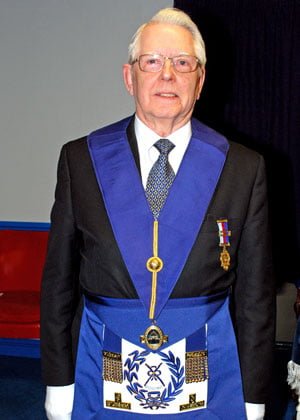 At the last meeting of St Luke’s Lodge No 6006 before the summer break, the brethren and guests were invited to enjoy an evening of Masonic music, held at Litherland Masonic Hall. The talk with musical illustrations was entitled ‘The master’s song, what is it?’ and was presented by Derek Hughson PAGDC, PPrGOrg, a member of Old Crosbeian Lodge No 4992.

On entering the temple before the meeting, the brethren where greeted by the gentle melodic sounds of instrumental classical organ music selected by Derek for the evening, which greatly enhanced the atmosphere.

Once all the brethren had entered the temple, WM Thomas McVeigh, opened the lodge and after the initial business was completed, Thomas introduced Derek to commence his lecture to the waiting brethren.

Derek proceeded to explain in great detail how over the passage of time, the master’s song has evolved and changed to the various versions that are in use around the country, being performed today. Derek’s talk was illustrated with music recorded specially for the purpose of showing the different pieces of music used to accompany and the various changes to the master’s song. 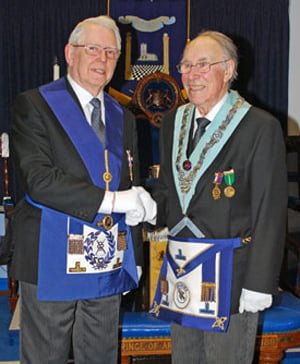 Derek (left) being greeted by the WM Thomas McVeigh.

Derek’s talk lasted for about 45 minutes and was clearly enjoyed by the brethren, with his knowledge on the subject clearly evident and well researched throughout the talk. Many of the brethren present found that after the talk they were much wiser and surprised about something which is usually taken for granted at the festive board and sung at installations.

When the talk was finished, Derek received a rapturous round of applause from the brethren for his excellent, informative and enjoyable lecture.

With the proceedings in the lodge being ended, the brethren made their way to the dining room, for an excellent and jovial festive board. During the evening a raffle was held which raised £97 for the lodge’s widows.

At the end of the night, Tom finished by thanking Derek for his wonderful and informative lecture.