“There is in every regular and well governed Lodge, a certain point within a circle, embordered by two parallel perpendicular lines. . .. “

Today, June 24th, Freemasons celebrate the Feast of St. John Baptist. A curious thing for a non-sectarian group to do. Freemasonry historically acknowledges St. John the Baptist and St. John the Evangelist as its patron saints, reveres their memory, points to their exemplary lives in its ritualistic work, and dedicates its Lodges to them.

In 1740, Chevalier Andrew Michael Ramsey, a Scottish expatriate living in France, as Orator of the Grand Lodge of France, first suggested what morphed into the Templar theory of the formation of Freemasons. “During the time of the holy wars in Palestine, several principal lords and citizens associated themselves together, and entered into a vow to re-establish the temples of the Christians in the Holy Land; and engaged themselves by an oath to employ their talents and their fortune in restoring architecture to its primitive institution. They adopted several ancient signs and symbolic words drawn from religion by which they might distinguish themselves from the infidels and recognize each other in the midst of the Saracens. They communicated these signs and words only to those who had solemnly sworn, often at the foot of the altar, never to reveal them. This was not an oath of execration but a bond uniting men of all nations into the same confraternity. Some time after our order was united with the Knights of St. John of Jerusalem. Hence our lodges are, in all Christian countries, called Lodges of St. John.”

Ramsey largely invented his tale out of whole cloth, and there is nothing to suggest that his account was anything more than a fairy tale.

In what is called the Old York Lecture from about 1770 in England has the following as part of its EA catechism:

“Q. To whom were the lodges dedicated during the Mosaic dispensation?”__”

“Q. And under what name were the Masons known during that period?”__

“A. Under the name of Dionysiacs, Geometricians, or Masters in Israel.”__

“Q. But as Solomon was a Jew, and died long before the promulgation of Christianity, to whom were they dedicated under the Christian dispensation?”__

“A. From Solomon the patronage of Masonry passed to St. John the Baptist.”__

“Q. And under what name were they known after the promulgation of Christianity?”__

“A. Under the name of Essenes, Architects, or Freemasons.”__

“Q. Why were the lodges dedicated to St. John the Baptist?”__

“A. Because he was the forerunner of our Saviour, and by preaching repentance and humiliation, drew the first parallel of the Gospel.”__

“A. Because he finished by his learning what the other began by his zeal, and thus drew a second line parallel to the former; ever since which time Freemason’s lodges in all Christian countries, have been dedicated to the one, or the other, or both of these worthy and worshipful men.”

The Preston Lectures, which is what our own rituals are based upon (by way of Thomas Smith Webb in the US), were the standard in England until the reconciliation between the “Ancient” and “Modern” factions in 1813, when a compromise was developed. References to the Saints were removed, the parallel lines were said to represent Moses and Solomon, and the lodges dedicated “to God and his service.” Our English brethren removed the saints to eliminate any hint of religious sectarianism.

In our American version, one of the least understood symbols is a certain point within a circle, bounded by two parallel lines, with the volume of sacred law at the top.

The symbol is actually based on an old astrological and alchemical symbol. The point in the center represented the Earth, which was thought to be the center of the universe. The heavens were believed to spin around the Earth, represented by the circle. The two lines represented the summer and winter solstices, the longest and shortest days of the year. For thousands of years, these days were celebrated as pagan feast days all over the world, and they were especially important to farming societies, because they were the astronomical methods of determining planting seasons.

In about 300A.D., the Catholic Church began to dedicate popular pagan feast days to the saints. June 24th, the longest day of the year, was declared St. John the Baptist day, while December 27th, the shortest day, was dedicated to St. John the Evangelist. Collectively, Masons refer to them as the Holy Saints John.

Operative Freemasonry was first developed when Roman Catholicism was the prevailing religion, and these feast days continued under the Church of England. It was common for guilds and other trade groups to adopt a patron saint or two. Some Masons picked both Saints John, and over the centuries Masons commonly celebrate their feast days with banquets. And curiously, even though Freemasonry today is non-denominational and non-sectarian, American Masons have retained these customs of old. Part of the ritual in America says that Masons come “from the Holy Saints John of Jerusalem,” while in other parts of the world, lodges are dedicated to King Solomon. 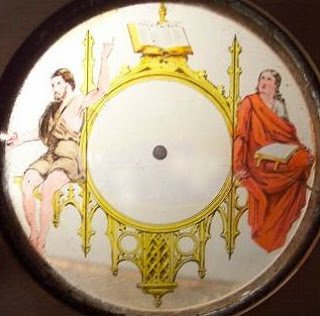 John the Baptist was zealous, while John the Evangelist was learned, and by picking both of them as patron saints, Masons symbolically united both passion and reason.

The symbol also shows the Volume of Sacred Law at the top. In Masonry, the point represents the individual, and the circle is the boundary of his actions. Taken as a whole, the symbol implies that a Mason should consult the sacred texts of his own religion to achieve the proper balance between passion and intensity on one side, and knowledge and education on the other. In other words, he should balance education, excitement and faith to effectively subdue his passions. In a way, it is a graphic representation of the conscience.

More information about the Feast of St. John the Evangelist from Handbook of Christian Feasts and Customs by Fr. Francis X. Weiser, SJ:

This saint was highly honored throughout the whole Church from the beginning. Proof of this is, among other things, the fact that fifteen churches were dedicated to him in the ancient imperial city of Constantinople. Being the precursor of our Lord, he was accorded the same honor as the first great saints of the Christian era, although he belonged to the Old Covenant. The fact that Christ praised him so highly (Matthew 11, 11) encouraged, of course, a special veneration. Accordingly, we find a regular cycle of feasts in his honor among the early Christian churches.

The question arises of why June 24, and not 25. It has often been claimed that the Church authorities wanted to “Christianize” the pagan solstice celebrations and for this reason advanced Saint John’s feast as a substitute for the former pagan festival. However, the real reason why Saint John’s Day falls on June 24 lies in the Roman way of counting, which proceeded backward from the calends (first day) of the succeeding month. Christmas was “the eighth day before the Kalends of January” (Octavo Kalendas Januarii). Consequently, Saint John’s nativity was put on the “eighth day before the Kalends of July.” However, since June has only thirty days, in our way of counting the feast falls on June 24.

The Baptist is patron of tailors (because he made his own garments in the desert), of shepherds (because he spoke of the “Lamb of God”), and of masons. This patronage over masons is traced to his words:

Make ready the way of the Lord, make straight all his paths. Every valley shall be filled, and every mountain and hill shall be brought low, And the crooked shall be made straight, and the rough ways smooth. (Luke 3, 4-6.)

All over Europe, from Scandinavia to Spain, and from Ireland to Russia, Saint John’s Day festivities are closely associated with the ancient nature lore of the great summer festival of pre-Christian times. Fires are lighted on mountains and hilltops on the eve of his feast. These “Saint John’s fires” burn brightly and quietly along the fiords of Norway, on the peaks of the Alps, on the slopes of the Pyrenees, and on the mountains of Spain (where they are called Hogueras). They were an ancient symbol of the warmth and light of the sun which the forefathers greeted at the beginning of summer. In many places, great celebrations are held with dances, games, and outdoor meals.

Fishermen from Brittany keep this custom even while far out at sea in the Arctic Ocean. They hoist a barrel filled with castoff clothing to the tip of the mainsail yard and set the contents on fire. All ships of the fishing fleet light up at the same time, about eight o’clock in the evening. The men gather around the mast, pray and sing. Afterward they celebrate in their quarters, and the captain gives each crew member double pay.

Another custom is that of lighting many small fires in the valleys and plains. People gather around, jump through the flames, and sing traditional songs in praise of the saint or of summer. This custom is based on the pre-Christian “need fires” (niedfyr, nodfyr) which were believed to cleanse, cure, and immunize people from all kinds of disease, curses, and dangers. In Spain these smaller fires (fogatas) are lighted in the streets of towns and cities, everybody contributing some old furniture or other wood, while children jump over the flames. In Brest, France, the bonfires are replaced by lighted torches which people throw in the air. In other districts of France they cover wagon wheels with straw, then set them on fire with a blessed candle and roll them down the hill slopes. 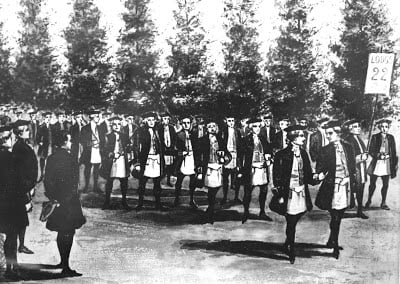