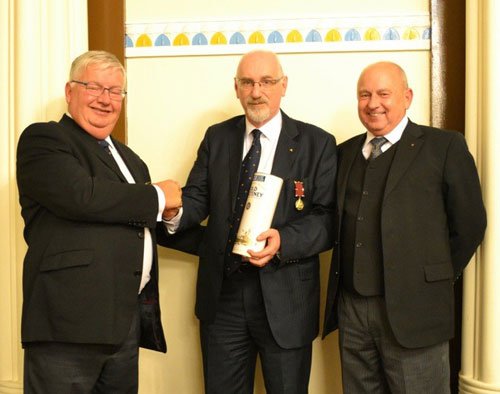 The companions of St John of Jerusalem Chapter No 203 were honoured to receive Paul Shepherd, Assistant to the Provincial Grand Principals, to their installation meeting at Liverpool Masonic Hall. Paul was accompanied by Liverpool Group Royal Arch officers David Kemp and Timothy Burgess. The chapter was opened for business by first principal Geoffrey Cuthill, acting second principal Dave Ullathorne and third principal Steve Roberts who warmly welcomed their guests for the evening.

Pictured from left to right, are: Stephen Roberts, Geoffrey Cuthill and David Ullathorne.

For the ceremony of installation Geoffrey invited David Kemp to take the second chair and Tim Burgess the third chair, while the two principals elect, Steve Roberts and Dave Ullathorne, relocated to the west of the room. Sadly, the second principal of the chapter, Ian McFall had died only weeks after being installed at the ceremony last year, and Dave Ullathorne had willingly volunteered to stand in for him, and this year to continue in that role. Due to an unforeseen circumstance, the third principal elect, Steve Dovaston, was unable to attend so only two of the three principals elect were presented in turn by Geoff Gill.

After having their duties and responsibilities explained by Graham Hamilton-Taylor, the two gave their affirmation before taking their obligations. The readings throughout the ceremony were all performed admirably by Paul Shepherd, while those taken when facing the east were recited by Tim Burgess. Geoffrey installed his successor, Steve Roberts into the First Principal chair in due and ancient form, after which Steve thanked Geoffrey and invested him with the collar and jewel of a past first principal.

Steve in turn invested David Ullathorne as second principal, while Tim Burgess unhesitatingly agreed to remain in the third chair for the remainder of the evening. After the officers for the coming year had all been invested Geoffrey arose to present the charter and centenary charter of the chapter to Steve, along with by-laws and Book of Regulations.

At the conclusion of the ceremony, Paul Shepherd rose to bring greetings from the Grand Superintendent Tony Harrison and congratulated all who had taken part in the ceremony. A large part of the success of the evening was due to Geoff Gill, assistant director of ceremonies for the chapter, who only learnt of the absence of the DC upon arrival and immediately stepped in without a moment’s hesitation, likewise Mike Whitlock in taking up the position of scribe Nehemiah.

On completion of formalities the companions retired to the festive board for a celebratory meal, during which Steve Roberts presented his predecessor Geoffrey Cuthill with a past first principal, jewel along with a fine bottling of malt whisky, both of which were gratefully received.

Pictured front row from left to right, are: The three principals, David Ullathorne, Stephen Roberts and Tim Burgess with their officers.