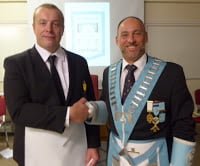 The Iron Bridge Lodge 9897 welcomed a new Brother Initiate on the 14th when WBro Simon Clare (left) conducted an efficient Ceremony following his lengthy bicycle ride from the South-East.

Brother Richard Slack became a Freemason on the same night that VWBro Roger Pemberton became Master Elect of Shropshire’s newest lodge. Richard is a security guard at a certain well-known local University college – so it was very appropriate that he should become a member of our first University Scheme lodge. Richard is also to be complimented on his appearance wearing his Festival Jewel on his first night in Masonry!

The evening was a warm one again, and several of those present are pictured enjoying a cooling drink after the formal part of the evening – which took only a little over an hour… 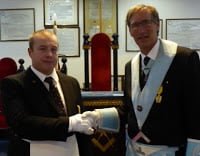 Richard was soon out and about, visiting Pengwerne Lodge the