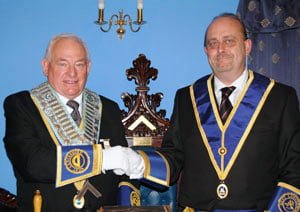 After a very happy and successful year in the chair of King Solomon, it was time for the WM Arthur Bartley to install his successor at the meeting of Toxteth Lodge No 1365 at Woolton Golf Club.

Arthur opened the lodge in fine style and with the regular lodge business swiftly dispatched, the lodge was raised to the third degree. Lodge DC Matt Wilson then announced that Assistant Provincial Grand Master Tony Bent stood without and demanded admission, Arthur said the lodge would be delighted to receive him.

Arthur gave Tony a very warm welcomed and Tony replied saying that he was delighted to be present and would be pleased to accept the gavel but returned it so that he could enjoy the evening. Tony was saluted in due form followed by salutations to the other grand and Provincial grand officers. 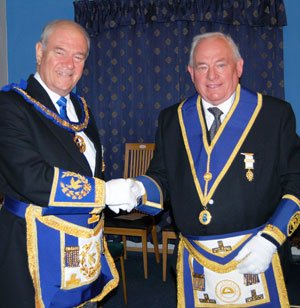 After the lodge was resumed in the third degree, WM Arthur Bartley asked Simon Birch, the son of the master elect, to occupy the masters chair to install his father into the chair of King Solomon. Philip was then expertly installed as WM by his son Simon.

The address to the newly installed master was given by Arthur Bartley, whilst Eric Binks addressed the wardens, other addresses were to the deacons by David Nicholson, to the tyler by Jim Hayden and Tony Bent gave the address to the brethren of the lodge.

Tony then had pleasure of bringing the congratulations and good wishes of the Provincial Grand Master Tony Harrison, commenting on the manner in which the WM had been installed into the WM’s chair by Simon, Tony then whished Philip well for his term in office.

Philip then had the pleasure of presenting a number cheques to Tony; £300 to the Freemasons Grand Charity for the Tercentenary Celebration, £200 to the West Lancashire Freemasons’ Charity and £100 to the Woolton Group. Tony thanked the brethren on behalf of the recipients for their generosity. The lodge was then closed and the brethren the retired to the festive board.