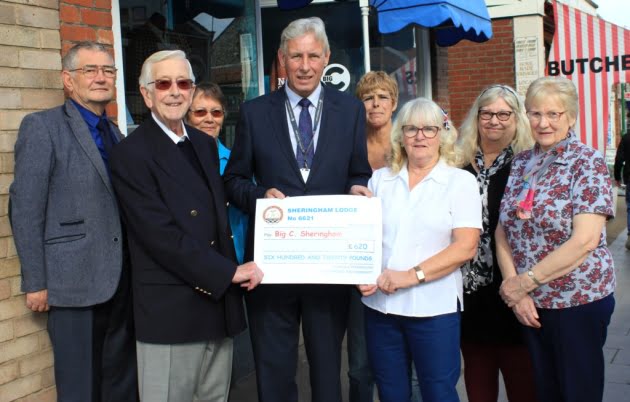 A ladies’ evening held at Sheringham Masonic Centre has raised more than £600 for Norfolk and Waveney cancer charity Big C.

Because Mrs Smee has been a volunteer at the town’s Big C shop for the past seven years, she chose the charity as the beneficiary of the £620 raised from the sale of raffle tickets during the evening.

“Cancer has touched the lives of just about every family I know,” Mrs Smee said. “And, because the money raised in all 15 Big C shops goes to support Norfolk people, I was very keen for the proceeds to go to them.”

He added: “Norfolk people have raised more than £32 million over the past 38 years and raised £32 million last year alone. This has meant our centres have seen around 24,000 visits, whether in acute centres at hospitals, or those in communities.”

The charity, which was founded in 1980 by two men with cancer who wanted Norfolk people to have better, closer to home treatment, runs drop-in hospital support and information centres at Norwich, Great Yarmouth, Gorleston and Kings Lynn, also funding research and offering community, telephone and online support.

Mr Bushby said: “Big C relies entirely on donations and not only are we very fortunate to have 380 people who regularly volunteer, but we have new people joining every week.”

For more information about Big C support and services, or to find out about becoming a volunteer, visit www.big-c.co.uk