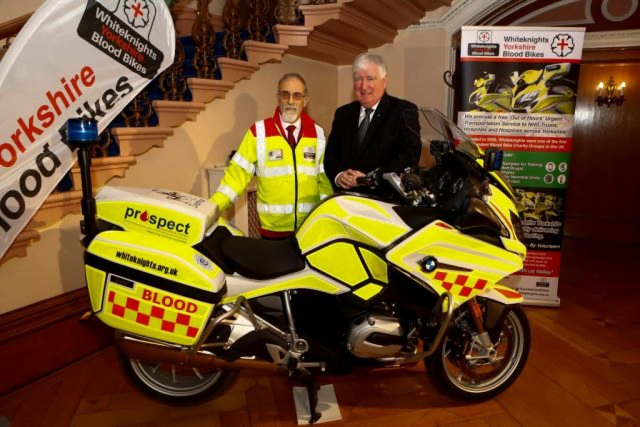 A charity that delivers life-saving blood, breast milk and pathology samples to hospitals at night have added a new motorbike to its fleet, thanks to Sheffield Freemasons.

Due to a sizeable financial legacy left to Ivanhoe Lodge, its members agreed to use a portion of the bequest to not only purchase a motorbike for the Whiteknights Yorkshire Blood Bikes but also to pay for its running costs for three years.

The bike – named “Ivanhoe” – was officially handed over to the charity at a ceremony held at Tapton Hall in the city, where Ivanhoe Lodge meets.

Whiteknights Yorkshire Blood Bikes was co-started ten years ago by biker Vic Siswick after noticing a lack of sample delivery provision at night while he was undergoing cancer treatment.

It now has 60 volunteer riders, all advanced motorcyclists, who deliver urgent samples between 7pm and 7am, which are outside normal NHS hours. 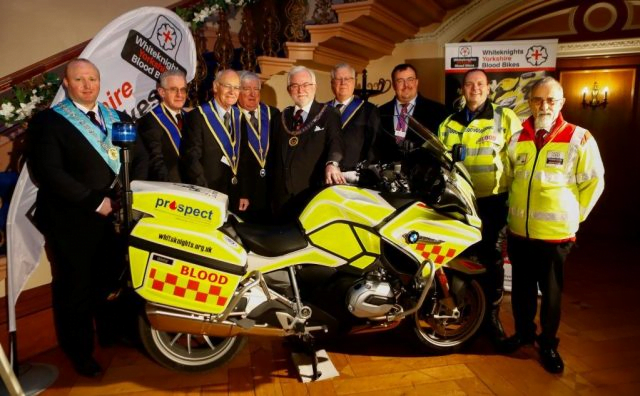 One of those to benefit from the charity’s services is Ivanhoe Lodge member John Bulliman, whose life was saved three years ago by the delivery of an emergency unit of blood from his original bone marrow donor in the Midlands, to the Royal Hallamshire Hospital, where he was being treated for leukaemia and sepsis.

“Before deciding on making this donation we invited Whiteknights Yorkshire Blood Bikes chairman Andrew Foster to tell us about the work of the charity.

“John was present and it was the first time Andrew had ever met a beneficiary of the service they provide. Subsequently, John has now done an interview for the charity to thank them for helping save his life.

“Following Andrew’s presentation, the lodge voted unanimously to purchase ‘Ivanhoe’ and pay for its running costs for three years.

“Charity is one of the three grand principles Freemasonry was founded on, and, thanks to this legacy, we are able to support the Whiteknights Yorkshire Blood Bikes and the selfless service they provide to the benefit of people across Yorkshire.”

“We are truly grateful to the members of Ivanhoe Lodge for this wonderful donation. It’s a fantastic way to start the New Year.

“I am also a Freemason and was personally humbled by the level of support I received from the lodge when I was asked to give a presentation about our work.

“This new bike takes our fleet of blood bikes to eight and means that we can respond to even more requests to transport samples, and that means hopefully saving more lives of people in Yorkshire.

“We have a terrific team of volunteer riders and Ivanhoe Lodge’s generosity is a massive boost for us.

“Like all charities, we rely on the generosity of individuals, business and organisations to fund our operation, which cost in the region of £40,000, which pays for fuel, repairs and the servicing of our machines.”

Further information about The Whiteknights Yorkshire Blood Bikes is available from its website,https://whiteknights.org.uk/