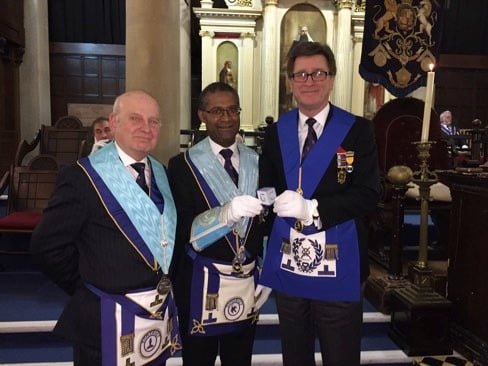 A series of coincidences

A visiting Mason couldn’t believe his luck when he ended up as the candidate for initiation at the Provinces, and one of the countries, oldest lodges. The story begins way back in 2015 when W Bro Paul Smith came to Bath from North Wales with his wife on a shopping weekend, but as we all know a man can only shop for so long. Imagine his joy at seeing tours of the Bath Masonic Hall / Original Theatre Royal were available . After seeing the inside of our fabulous building Paul vowed he would return for a meeting. He tried to organise a Fraternal visit but his lodge in North Wales meets on the same evening as Royal Cumberland No 41. So rather than miss out he came on his own.

The first surprise was that the lodge were receiving their 3rd Ashlar from the Provincial Grand Charity Steward W.Bro. David Maddern.

The next surprise was that he was to be the candidate in a demonstration initiation ceremony. He later said how he had a tear in the eye whilst having the charge recited to him almost 31 years to the day he originally received it. The final surprise was when he looked at The honours boards and saw W Bro Paul Smith ( his name sake) was master of Elizabethan Lodge No7296, wait for it…. In 1985, the year “he” was initiated ! Too many lucky coincidences ? Or good fortune? Either way a fantastic evening was had by all.