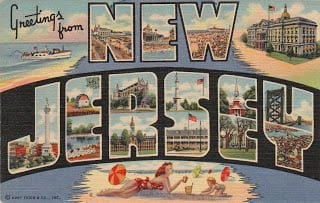 Last month I received a massive stack of information from an anonymous Mason in New Jersey, detailing an ongoing series of disquieting episodes in that state. It took a while to read through all of the information, and even after I read it, I was uncomfortable with posting it here. The problems were internal and complex.

The person spreading the details from New Jersey goes by the moniker the “Lone Ranger,” and he seems to have inside access to internal documents that chronicle some of the problems.

On Saturday, Fred Milliken over on the Freemason Information blog site made the story public outside of New Jersey. Read it HERE if you are so inclined. Given that Fred has done so, I’ll try to encapsulate what is being circulated.

As I understand it, according to the Ranger’s many lengthy messages, the accusation is that a previous Grand Master of New Jersey declared Warren Lodge No. 13’s officer election void two years ago and installed a new Worshipful Master and other officers on his own authority.  Following that, the new Master allegedly attempted to seize control of the lodge’s Temple Association by replacing its Trustees with the intention of selling the building. When the previous Trustees refused to accede, the Grand Master eventually intervened, and over a period of time, it is claimed that he suspended or expelled some 50 members of the lodge, denying them their rights to a Masonic trial. The lodge’s charter was pulled, as well.

Subsequently, a lawsuit was filed by the Grand Lodge to wrest control of the Belvedere Temple Association from the former Trustees who refused to hand over the building. According to the Trustees’ defense, their position is that the Temple Association is an independent corporation that does not require its Trustees to be Freemasons, and even if they have been expelled, they are still the rightful owners of the building and therefore, cannot be removed by any Grand Master.

The case is currently winding its way through the court system, but decisions by the judge in the case in September of last year had at that point all gone against the Grand Lodge plaintiffs.

As mentioned in Fred’s post on Saturday, the overriding issue the Lone Ranger has against the Grand Lodge traces back to two so called “Landmarks” in the official NJ GL Constitutions that were added back in 1903 by allegedly being buried in the body of a report at that time without a vote at the annual communication. Those officially adopted Landmarks, Numbers 3 and 7, apparently gave the Grand Master virtually unlimited authority to disregard the By-Laws and Constitution of the Grand Lodge at will.

The current imbroglio has been going on at least since 2014, and the Lone Ranger claims to have a growing mailing list of 3,600 “Deputies” who are following the situation so far – largely New Jersey brethren.

I have hesitated to post any of this until now, because of the strictly internal nature of the issues involved. And I am not generally fond of anonymous disagreements, particularly when they are lodged against an advancing line of duly elected (and subsequently re-elected) GL officers. Earlier this month, a disgruntled Indiana Mason circulated a letter to all of the sitting Masters in the state laying out a series of complaints he had before our annual communication in an effort to influence the voting and cause trouble. The accusations were baseless, and it was not the way Freemasons should act. Very good and honorable men were besmirched, but after a fiery address at the very beginning of the annual communication by a respected Past Grand Master denouncing the anonymous scrivener, he received a standing ovation. The letter wound up accomplishing precisely nothing, apart from setting off a parlor game to deduce who’s work it was. But those of us in Indiana resented the interference of outsiders when the letter was posted on Facebook.

As I say, I’m not generally fond of anonymous accusers in Masonry. At the very least, it’s un-Masonic behavior. That said, back in 2004, I myself was part of an anonymous group that went by the name “Knights of the North” who wrote a booklet called Laudable Pursuit. While its contents seem tame today, at the time, certain members within our grand lodge wanted us all to be hunted down and expelled for questioning the status quo. So I am perhaps being hypocritical.

On the one hand, given the apparent powers granted to New Jersey Grand Masters to disregard their own By Laws and Constitution, aside from the usual powers these men normally have in the fraternity, it is understandable that these ongoing information leaks probably must remain anonymous. They appear to be coming from someone well placed within the GL officer or committee structure, given the nature of the documents, and that person is walking a very dangerous line by circulating them.

On the other hand, those 3.600 New Jersey Masons on the Lone Ranger’s mailing list aren’t all necessarily sympathizers to his cause. They are just names on a listserv. If all 3,600 agreed with his estimation of their lineup of leadership over the last two years or more, there would have been open insurrection at their annual communication, the grand officers’ line would have been disrupted, and these allegations would have crept beyond New Jersey’s borders a long time ago.

This situation is not like other circumstances that smear the rest of the fraternity outside of their state by dragging the rest of the Masonic world ‘s reputation through the mud, or by violating the Ancient Charges, or even by affecting issues like recognition. This isn’t remotely like the Georgia/Tennessee issue.

I don’t live there, I don’t know any of the men involved, and I don’t pretend to understand their situation. Most important, it”s not within the scope of anyone outside of the voting members of the Grand Lodge of New Jersey to solve.

Every family has its problems, but that doesn’t always give all of the neighbors the right to interfere. Sure, sometimes you have to call the cops, or even just knock on the door to make sure everybody’s alright. But it’s ultimately their business, and sometimes you have to just let them yell at each other.