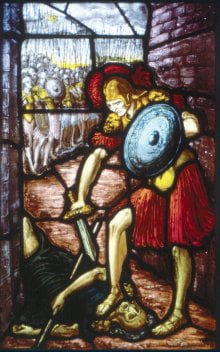 Generations of pupils at the Royal Masonic School for Girls at Rickmansworth in Hertfordshire have passed them or sat under them while eating or listening to a sermon. But, by and large, one suspects that the extraordinary wealth of paintings and stained glass in the school has been accepted by most pupils and staff – familiar but only as part of the fabric.

Yet the art in the school deserved more than a passing nod, and in conjunction with Jennifer Brooke, I decided to spend some time researching the lives and work of the three artists primarily responsible for decorating the school.

The oldest stained glass, largely sited in the Assembly Hall and along its adjacent corridors, was produced by a preeminent stained glass master, Edward Frampton (1850-1929).

Frampton, the son of a Dorset man, had to overcome the resistance of a sternly non-conformist family before he was allowed to abandon law and study art.

Even so, permission was only given on the understanding that he should confine his studies to ecclesiastical art! But such art ran in the family because his only son, Edward Reginald Frampton – who died before his father in 1923 – also became a distinguished landscape, figure and religious painter and sculptor.

The windows were presented by various prominent Masons and were installed over the period 1891-1904, but only some are signed with Frampton’s name. As there were some 20 glass-painters in Frampton’s studio in Buckingham Palace Road, London, presumably apprentices helped with the mammoth production.

All Frampton’s work was transferred from the old school in Clapham. The huge stained glass windows in the Assembly Hall show the arms of the Masonic Provinces and Lodges that presented them, with the ‘Royal’ window dominating. This includes the arms of Edward VII – then serving his long apprenticeship as Prince of Wales – and other 19th century minor Royal patrons of the school.

Unfortunately, the rumbustious and colourful Shakespearian pictures, which include a splendid Falstaff, are placed on the Administration block staircase. It is a good site to display their attractions, but has the major disadvantage that the pictures are seldom if ever seen by the students they were presumably designed to amuse and edify.

While Frampton was Clapham’s artist, at Rickmansworth two quite different painters were responsible for the decoration of those areas used by the whole school – the Chapel, Assembly Hall and Dining Room. They were Louis John Ginnett (1875-1946) and Charles Knight (1901-1990).

Ginnett, the senior figure, was the dominant partner in the project. He grew up in his father’s Sussex circus. After a brief attempt, like Frampton, to study law he became an artist and taught students. Before his work at the RMS, Ginnett had decorated the hall at Brighton, Hove and Sussex Grammar School (now Hove and Sussex Sixth Form College). He taught at the Brighton School of Art until his death.

In the RMS Assembly Hall he designed and painted the 16 blue-on-red plaques or medallions, four depicting the elements and the others the 12 months of the year, symbolised as people. Ginnett’s work dominates the Chapel and demonstrates his talent for painting and for stained glass.

Ginnett painted the four striking frescoes illustrating The Sermon on the Mount, The Gathering of the Children, The Adoration of the Magi and The Ascension. He also painted the four, long stained glass windows displaying appropriately female saints and the 36 artlessly charming small stained glass windows depicting child angels playing a variety of musical instruments.

Knight was a distinguished artist. In 1940 he was recruited for Kenneth Clark’s Recording Britain project, an ambitious scheme set up at the outbreak of World War II. The aim was to record buildings and views before the war and development obliterated them, and to boost national morale by celebrating the country’s natural beauty and architectural richness. In later years he exhibited regularly at the Royal Academy and there is a large collection of his paintings in the V&A and British Museums, as well as in Brighton.

Given the sheer artistic work undertaken by Ginnett at Rickmansworth, it is no surprise that the last lock of paint had not dried when the school opened for the first time in the spring of 1934 – the first stage of the building had begun in December 1929.

Charles Knight, like Ginnett and John Denman, the school architect, was a Sussex man. As a youngster he was employed by Denman’s firm and it was presumably this connection with Denman – and no doubt a Masonic tie as well – that helped him get the Masonic job at Rickmansworth.

Among his work at Rickmansworth, Knight painted the 16 square plaques in the dining hall, each representing an animal or plant from which food is derived. Between them these two artists gave the three public spaces of the school their unique decorative character