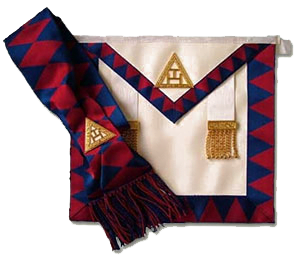 The Royal Arch Mason’s clothing includes robes, aprons, sashes, collars, chains and jewels. The 1766 rules of the Excellent Grand and Royal Chapter say that the Excellent Grand Principals will wear proper Robes, Caps, Jewels, but no Apron. All the Companions wear Aprons (unless they are authorised to wear Robes), and the Aprons shall be all of one sort and fashion.

The 1766 Chapter of Compact ruled that the aprons should be “indented with crimson with a visible T-over-H properly displayed as well as the indented Ribbon or Sash of this Order“. The robes worn by the Three Principals are traditional, and not of any specific period of time, and they are coming from the ancient and world-wide custom of persons in authority such as judges, priests, scholastics, etc. The colours of the Royal Arch, ‘blue, purple and scarlet’ are taken from Exodus Ch25 V4 and Ch26 V1 but there have been some variations with time.

The surplices of white linen worn by the Sojourners date back from at least 1778 when the first Grand Chapter first approved them. The Scribe’s surplice comes from the same period and is derived from the alb, a longer linen vestment from Greek and Latin origin worn by Christian priests since the third century AD. It symbolises the renewal of man in justice and in the holiness of truth. 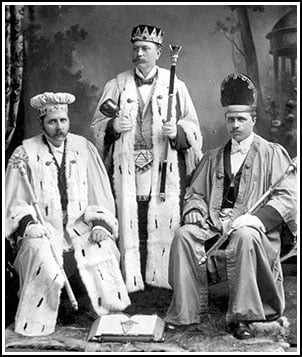 The headdress was once part of the clothing of the Grand Principal as described in the 1796 rules of the Grand Chapter; this custom survives in many Chapters in the USA. Many other ordinary Chapters used also headdresses, but today it is rarely seen in English Chapters. The headdress was not originally a mitre in the style of those worn by bishops.

The original Royal Arch apron was in fact the apron used by the Craft, with or without the addition of symbolic decorations. This was mainly the case of the “Antients” since the “Moderns” had adopted, already in 1766, an apron similar to those used to day. As the Craft objected to the Royal Arch Masons of the “Antients” system wearing their typical aprons with all the symbols in the Lodges, the Grand Chapter decided to prohibit its use there until a solution was approved by the Grand Lodge, but this never happened.

Of course the Royal Arch Masons still wore their aprons in their Chapters. Today a Companion’s apron in the English Royal Arch is made of white lambskin, from 14 to 16 inches wide, and 12 to 14 inches deep with a triangular overlap. It has an indented crimson and purple border no more than 2 inches wide, except along the top. In the centre of the overlap is a triangle of white skin within a gilt border and, within the triangle, the emblem has three taus united in gold embroidery. In addition two gold, or metal gilt, tassels are suspended from beneath the overlap by ribbons. In the aprons of Past and Present Principals, the silk triangle on the overlap, and the backing on ribbons, are crimson.

The aprons of Provincial and District Grand Officers, etc., have the gilt emblems of office or rank in the centre, within a double circle, in which is inserted the name of the Province or District, London or Overseas, according to the case. Backing and ribbons are of dark blue. The aprons of Grand Officers and Grand Superintendents have a double indented crimson and purple border 4 inches wide, with the emblem of office embroidered in gilt in the centre within two branches of laurel; the backing and ribbons are also dark blue.

In the early chapter the sash was sometime worn on the right shoulder because they believed that, originally, the sash was a sword-belt that had to be this way to allow the sword to be easily grasped by the right hand. They, of course, had in mind the ancient Craftsmen who rebuilt the Temple with the sword at their side, and the trowel in hand. If this tradition is accepted, then we are dealing with a knightly degree probably of French origin. There is also a strong suspicion that those wearing the sash on their right shoulder were “Moderns” Masons, while the “Antients” wore it on the left one.

English Grand Chapter regulations of today require all Companions to wear a crimson-and-purple indented sash over the left shoulder, passing obliquely to the right, with silk fringe at the end, the emblem to be embroidered on a white background.

Certain officers (for instance the Grand Officers) wore collars, or chains, for a long period of time. During the last century the Grand Superintendents also wore collars and chains, and the privilege is now extended to many more officers. The Royal Arch Jewell may be worn in a Craft lodge but not the Royal Arch collar or chain. Collars, sashes and aprons belonging to Royal Arch Masonry cannot be worn in public.