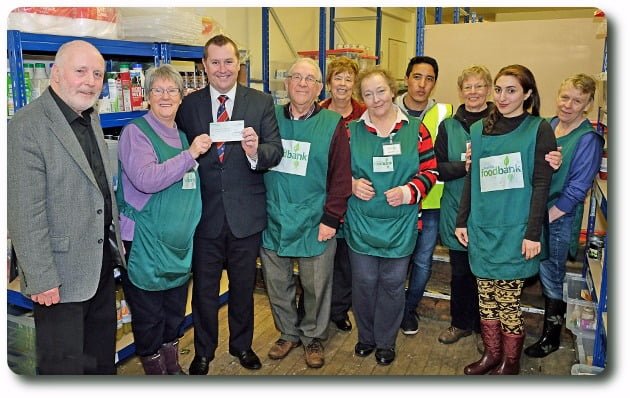 After the major flooding that occurred in Rochdale over the Christmas period last year, the Rochdale Foodbank were forced to continue their operations from temporary accommodation.  The flooding resulted in a loss of almost 7 tonnes of food which included much of the food previously donated by Rochdale Masons. Damage to the premises on South Parade amounted to a figure in excess of £1,500. During the clear up operation over 100 volunteers were employed at various times.  It was only last week that the Foodbank was able to return to its refurbished premises.

To support the Rochdale Foodbank through these difficulties the Rochdale Masonic Social Committee made an application to their Flood Relief Committee and were successful in being awarded a grant of £1,000. In addition to this grant, individual members together with Lodges of Rochdale were once again generous in providing the equivalent of ten boxes of tinned and none perishable food to the FoodBank.

The RMSC would like to thank all the Brethren and Lodges who donated. Any further donations are always appreciated.