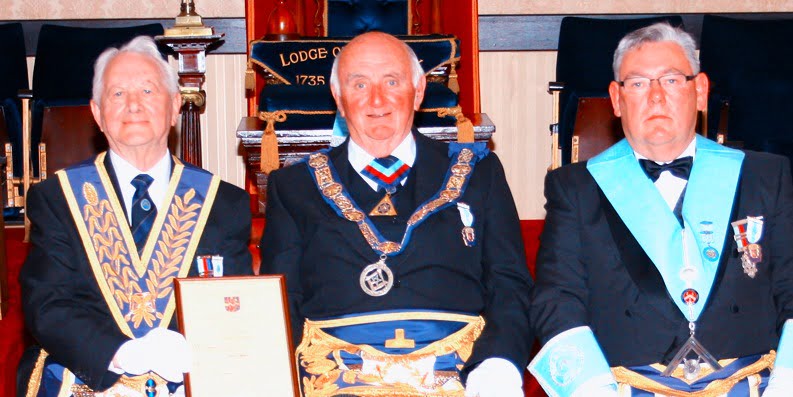 Lodge of Industry No. 48 in Gateshead, the North of England’s oldest lodge, was the first port of call for the 35 members of the new Provincial Team, following their installation just two days earlier. Led by Norman Eric Heaviside, the Provincial Grand Master, and admirably supervised by Andrew Dixon, the new Director of Ceremonies, the team duly processed into the temple to join the brethren and receive a most enlightening lecture, from Gareth Davies, on a previous PGM and local person of note, 1st Earl of Durham, Sir John George Lambton.

Born in 1792 to a family of standing and wealth, Lambton’s Etonian education ended, with a choice particular to his rebellious will, by enlisting as a Cornet in the 10th Hussars.

Returning to ‘normality’ he became MP for Durham City between 1813 and 1828, where he embarked on a career that saw him labelled as arrogant, vain, a reformer but individually quite brilliant, especially when it came to the art of diplomacy. Despite differing desires and failing health Lambton succeeded in difficult diplomatic assignments to Belgium, Greece, Russia and Canada, marking his name quite indelibly on history.

At the conclusion of the talk on an old esteemed mason, Eric proceeded to introduce and present a Certificate marking 60 years of membership to a present day mason of note, Raymond Macaree.

Ray joined the Lodge of Industry in 1956 and although only a day away from another big day in his life, the birth of his daughter, Ray’s wife Alice gave special dispensation for him to attend and be initiated. As a mark of the times, it took Ray some 17 years to climb the ladder and become master in 1973 before he carried on with various other offices in support of his lodge.

As a note towards Ray’s dedication Lodge of Industry, despite moving to Bath, through work, he still managed to adjust his holidays to allow full attendance back in Gateshead. This dedication was recognised and ultimately rewarded with Grand rank in 1989.

Ray has never stood still in his masonic career and was the first master of Dunston St Nicholas. Membership of a daylight lodge did not quite work out for him as, also, his membership of Neville Lodge of Installed Masters, and when travel became an issue he resigned to open a place for someone else in this limited membership lodge.

Eric thanked Ray for his assistance when he first became an Assistant PGM and then asked Andrew to read and present the certificate.

Ray replied that he feels very privileged to have been able to make a contribution to freemasonry in Gateshead and is grateful for the time and friendship afforded by those he has met over the last 60 years.

The present Worshipful Master, Ian Knighting, marked the occasion by thanking Ray and presenting him with two wine glasses, engraved respectively with the names of Ray and Alice Macaree. Ray was then pleased to present two cheques to Eric on behalf of the Lodge, towards the Festival and the Teddy appeal.