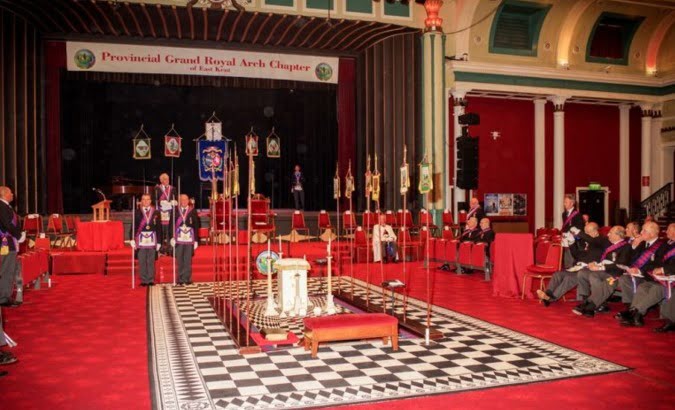 The hall is prepared for the opening of Provincial Grand Chapter

The sight of Freemasons gathering in their colourful regalia is a rare and intriguing spectacle. But be prepared to be dazzled, as we rock-on down to Margate and East Kent Freemasons in celebrating the annual festival of Provincial Grand Chapter.

While the general public is well aware of Freemasonry and the contribution Freemasons make to society, few have heard of the Royal Arch.

The Holy Royal Arch Chapter of Jerusalem (known as the ‘Royal Arch’ or ‘Chapter’ for short) is traditionally seen as representing the essence of Freemasonry and the completion of “pure ancient Freemasonry”. After completing the three initial degrees, every member of regular “Craft” masonry has the opportunity to extend his knowledge by joining a Chapter.

Freemasonry is well known for the allegorical and symbolic nature of its ceremonies. The Royal Arch ceremony, known as Exaltation, is perhaps the most colourful and dramatic of all Masonic ceremonies, as can be seen from the pictures.

Each year some 500 Chapter members from Kent and around the World gather in Margate for the annual Provincial Festival. In 2016 this was lead by the head of the Royal Arch in East Kent, Provincial Grand Superintendent Geoffrey Dearing.

This year Provincial Grand Chapter was honoured by the presence of the Second Grand Principal, Russell Race. Russell is an East Kent Freemason and rose to senior office in this Province before progressing to become Head of Freemasonry in the London area, in which capacity he served for 6½ years. He was appointed to his present high office last November by the First Grand Principal, His Royal Highness the Duke of Kent.

Chapter is regarded by its members as something of a unique degree because it combines valuable lessons, learned through an exciting ritual, with the addition of a little drama and role-play.

Seaside rock on sale before the Festival

To add a little fun to this year’s celebrations, Deputy Grand Superintendent David Kershaw had specially commissioned some seaside rock. This was on sale to members, with all proceeds going to charity, of course. For it is true to say, that despite the enjoyment Chapter members gain from their membership, they are motivated by the same values as in “the Craft”; i.e. Integrity, respect, concern for others, belief, charity and cooperation.

Indeed, this festival was an opportunity to celebrate the achievements of the Province in General and individual member in particular.

The Grand Superintendent appointed his officers for the year and made awards to those who have supported their Chapters and the Province. Following which, he addressed the membership, speaking  of his “Huge debt of gratitude for all who work to provide their support .” and looked forward to an “Exciting year with new initiatives to help the Royal Arch grow and increase the joy and companionship for its members.”

As you can see, the Rock was nearly sold out, so we can all look forward to something different next year!

If you are an East Kent Freemason and would like to know more about joining a Chapter, please contact your Lodge “Chapter Liaison Officer”.

Members of the public wishing to learn more about Freemasonry can find out more by visiting www.justaskone.org.