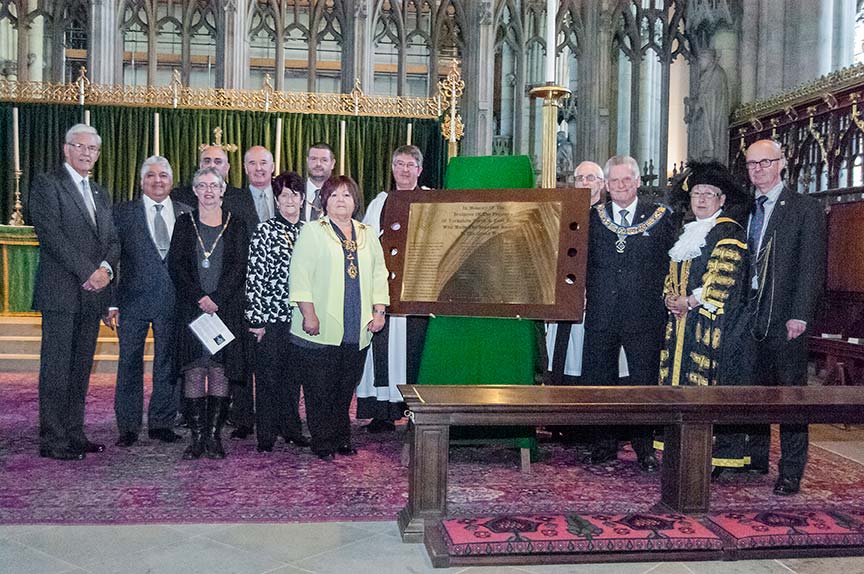 The Masonic Province of Yorkshire North and East Ridings, covers the ancient geographical areas of the North and East Ridings Yorkshire.
Every year, the Masonic Brethren attend a church service in a different part of the Province.
The Provincial Church Service this year, was held at York Minster on 27 September 2015 at the 4.00pm Evensong.
During this service, a commemorative plaque was blessed. It marked the service of 54 brethren from 22 Yorkshire North and East Ridings (YNER) Lodges, who, during the First World War, were killed in action, died of wounds or died whilst in the service of their King and Country in that conflict.
The head of the Masonic Province, Right Worshipful Brother Jeffrey Gillyon, accompanied by the Lord Mayor of York, Sonya Crisp and many civic and armed forces dignitaries, as well as hundreds of Brethren in full regalia, then walked through the streets of York, from the Minster to St Saviourgate. The British Legion also marked this occasion with a display of their banners. This display of Freemasons in their regalia is believed to be the first, in about one hundred years, although archives are being checked to establish this fact.
At St Saviourgate, the Provincial Grand Master unveiled the, newly-mounted, commemorative plaque, with full ceremonial, at the Masonic Hall and it was dedicated by the Provincial Grand Chaplain, Revd. Trevor Lewis.
All present stood in a reverential silence, after a trumpet tribute, by Brother Mark Richardson (VR), to our fallen Brethren.
The Lord Mayor said that she was pleased to be with the Freemasons on this memorable day for them.
The plaque came into being after one of the Yorkshire North & East Riding brethren, Peter Rudd, was researching the First World War and saw that these 54 Brethren of our area had not been officially recognised for their ultimate sacrifice.
A very emotional day for all concerned and we can now say both Freemasons and non-Freemasons, that we have truly recognised the service and sacrifice of those Yorkshire brethren.