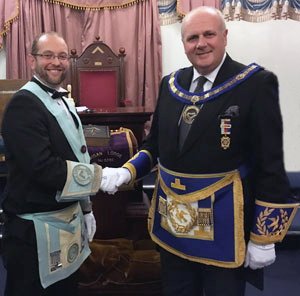 David Winder, Assistant Provincial Grand Master, had travelled to Bryn Masonic Hall to attend the installation of Wigan Lodge No 2326 and was accompanied by fellow grand officer John Quiggin, together with Geoffrey Porter, the group vice chairman and John Selley, the group assistant secretary and treasurer.

Also in attendance were two of the acting officers from the group, Alan Ireland PrAGPurs, who is also member of Wigan Lodge and Howard Morris PrGStwd. The Lodge was also pleased to receive two brethren from the assistant’s own lodge, Michael Cowsley PrJGD and Terry Turley PPrGSuptWks who had kindly agreed to assist as Provincial deacons.

David was not to witness the ‘normal’ installation ceremony, as Craig Lyon, the current WM, was proclaimed as WM for another year. Wigan Lodge is not great in numbers, but it is usual to see plenty of visitors at their installation and this year was no exception, with many brethren in attendance to support the retained WM and assist where necessary.

Everyone involved did a splendid job. As the Assistant Provincial Grand Master stated, it could have been a short and quite plain affair, there being no specific guidelines for a proclamation. However, he was pleased to say that the director of ceremonies Bob Whitney had decided that he was having none of that and had gone to great lengths to determine what could be done to make the day so very special. He certainly succeeded and was supported admirable by everyone.

The working tools of an installed master and the three degrees were delivered in fine style by Mike Purcell, Michael Durrington, Matthew Frayne and Julian Chambers. The address to the master was delightfully delivered by Stanley Crozier, the address to the wardens by Terry Turley of Ribble Lodge No 4558 and the Assistant Provincial Grand Master delivered an impeccable address to the brethren.

The ‘Barrow boys’ with the WM and APrGM.

The use of an impromptu assistant director of ceremonies, Chris Reeman from Corinthian Lodge No 3250, added to the occasion and the welcomed support from the ‘Barrow boys’ was greatly appreciated by the lodge members. Members of Wigan Lodge had visited Barrow earlier in the season and judging by the hospitality afforded to their ‘top of the Province’ guests, (as they described themselves); they had obviously been well received there. All in all there was a plethora of happy guests.

The custom in Wigan Lodge is that there is no charity collection in the meeting and no cheques are presented at the installation, so David left the lodge very happy, but empty handed, to join the brethren in a fine festive board during which over £200 was raised for charity in a well conducted raffle. Before leaving the festive board for home, David Winder was presented with a gorgeous bouquet of flowers for his wife Sue and a bottle of whisky for himself.