One of the most obscure symbols in Masonic iconography is the “Point within a Circle” appearing in the Tracing Board of the First Degree.

The traditional explanation, is that it represents “the point from which a Master Mason cannot err”, bounded by the two straight lines to the north and south representing either the two Saints John, the Baptist and the Evangelist, or Moses and King Solomon. This is, in my mind, a rather contrived attempt to give an explanation for a symbol which has no obvious meaning. Why would a Mason need an artificial enclosure within which ‘he cannot err’?  Furthermore, the relation between circle and infinity is well known, and the two parallel lines, that extend without end and never touch, are likewise symbolic of infinity. The Masonic explanation refers to the circle as a closed boundary, while the traditional meaning is exactly the opposite, no boundary but boundless infinity!

As for the point, Brother Steve A. Freite remarks that one of the six Hindu Darshanas, Nyaya, which is Logic, contains four fundamental values associated with the Point (E-mail to the PSOC List, 8.7.2001):

1.         Pradhvamsabhava, annihilation or convergence to the point.

Freite continues: “There is also the doctrine of nadi-bindu-prana which is used in a description of the subtle, bio-energetic body. Bindu, in this case, is the “point” or “drop”. Nadi is a conduit of bio-energy and prana is the life-force itself. By controlling these three, one can control consciousness. Sanskrit also has the word akshara, which describes the collapse of fullness to a point and from the point.”

The center is also a fundamental idea in alchemy. “According to Michael Maier, the center contains the indivisible point which is simple, indestructible, and eternal. Its physical counterpart is gold, which is therefore a symbol of eternity.” (C. G. Jung, Alchemical Studies, Routledge & Kegan Paul, London 1983, pp. 148-9, quoting De Circulo Physico Quadrato, pp. 27 ff.).

C. G. Jung also quotes another alchemist, Gerard Dorn, who writes: “Four is he One and yet not the One; it is simple and consists of the number four… it will show the adept the fulfillment of the mysteries. This is the center of the natural wisdom, whose circumference, closed in itself, forms a circle: an immeasurable order reaching to infinity… Here is the number four, within whose bounds the number three, together with the number two combined into One, fulfills all things… In these relations between four, three, two and one is found the culmination of all knowledge and of the mystic art, and the infallible midpoint of the center (infallibile medii centrum).” (Physica Trithemii, p. 39). And Jung adds that the One is the midpoint of the circle, the center of the triad… [it] is fire… the point is most akin to the nature of light, and light is a simulacrum Dei.” (op. cit. p. 151).

I have found a further reference that applies to this symbol. In the well-known cabbalistic treatise “Tree of Life” (Etz Hachayyim) of Rabbi Isaac Luria, as recorded by Haim Vital (www.workofthechariot.com/TextFiles/translations-EtzHaChayyim.html), at the start of its first Branch (Chapter), when describing the Genesis of the universe, we can read the following:

“He then contracted (Tzimtzum) Himself into the middle point, in the very center. He contracted the Light and removed Himself far to the perimeter round the midpoint, so that in that very midpoint there remained an empty place and air and a void”

He in the above text is obviously the Divine Creator, as described later in the same text by Vital: “There is no intellect created which could conceive of Him, since He has No Place, and No Boundary, and No Name”.

So we have here a description of the process of Creation, first Tzimtzum into the point, then expansion to the boundless infinity represented by the circle. Accordingly, the point within a circle in the Tracing Board represents the act of Creation, the  paradigmatic construction, which is the fundamental craft of the Mason. 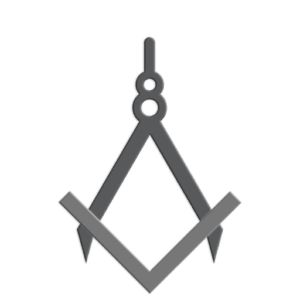