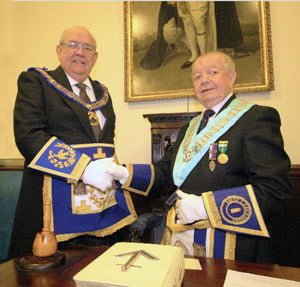 At this year’s installation meeting of Dona Conferentes Lodge No 9392 held at Southport Masonic Hall, the brethren were pleased to welcome Deputy Provincial Grand Master Philip Gunning as their principal guest. As ever, the officers congregated at 10:30 in the morning for an intensive practice session, expertly martialled by John Robbie Porter.

Neil led the usual salutations, after which the master of the lodge asked Jim Gregson to continue in his office as senior warden, David Brumwell to continue as junior warden and Rodney Greenall was requested to continue as inner guard. The master elect Bryan Humphries was presented by David Rotherham and perfectly installed into the chair of King Solomon by Frank Kennedy within a board of installed masters opened and closed in ancient form

After all of the working tools had been presented in fine style by John Robbie Porter, the address to the master was delivered in an excellent manner by Frank Kennedy, that to the wardens was delivered with finesse by David Randerson and that to the brethren was superbly delivered by Philip Gunning.

At the conclusion of the ceremony Philip brought the congratulations of the Provincial Grand Master Tony Harrison. He assured the brethren that had Tony been in attendance, he would have congratulated the installing master and his team for an interesting ceremony of installation. He also praised the new officers for taking positions in this unique lodge.

Following the meeting the brethren retired to a fine banquet of tomato soup, followed by roast lamb, lemon meringue with cream and cheese and biscuits, finished off with coffee and mints. The customary toasts followed. 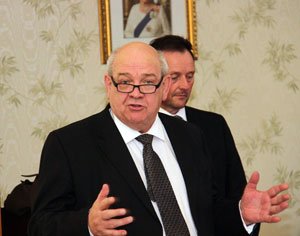 Philip Gunning responding to the toast to grand officers.

In responding to the toast to the grand officers, Philip Gunning expressed his congratulations to Bryan Humphries on being installed. He wished him a happy, successful and healthy year in the chair, his third term as master of a lodge. He also praised Frank Kennedy for such a fine installation ceremony but particularly for his wonderful address to the master.

In an entertaining address in which much banter passed between him and the new senior warden Frank Wilkinson, he amusingly quipped that this was only the second time he’d ever seen the tide in at Southport. He thanked the grand officers who had attended and he also thanked Southport Group Chairman Colin Jenkins for his support and asked him to convey thanks from all present to the staff at the hall.

In thanking the acting Provincial grand officers, Philip particularly thanked Neil MacSymons for stepping in on behalf of David Thomas as Provincial Grand Director of Ceremonies. David had been asked to attend but his son Jamie, who is a very promising young footballer, was at Cardiff where he was on the bench for Bolton Wanderers for the first time.

Philip also announced that he had made his daily advancement in Freemasonry as he had never seen the proving of the installed masters in 42 years of being a Mason. He particularly mentioned Jim Gregson for his recitation of the first six verses of the 137th psalm, adding that he was surprised that Jim didn’t burst into the song by Boney M.

In complimenting the lodge on its list of founders, he noted that many had been senior Provincial grand officers. He continued by complimenting the Provincial grand officers when he advised the brethren that the profile of this Province is increasing on a daily basis, with London looking to West Lancashire for leads on many fronts, particularly our care structure, which is the envy of everyone. He further advised that West Lancashire is the only Province with brethren on every major working party at Grand Lodge. This he added was down to the sterling efforts of Provincial Grand Master Tony Harrison.

Philip concluded by saying that it was wonderful to attend this meeting and offered all the best to Bryan and all the officers of the lodge for the year ahead.

In his toast to the master, Frank Kennedy described Bryan Humphries as an avid Mason who enjoys the work he has been doing in the lodge for over 15 years. In this lodge he has never been out of office and was particularly noted for his term as director of ceremonies. In his response Bryan Humphries recollected that when he joined in 1999 he saw the string of founders ready to take their turn in the chair. He never believed he would ever achieve that honour. He described Dona Conferentes as a nice friendly peripatetic lodge and he had fully enjoyed his time in the lodge. He thanked many members for their guidance during his time and thanked the brethren for their attendance. A raffle realised over £140 and the meeting was closed with the tyler’s toast proposed by Glenn O’ Brien.