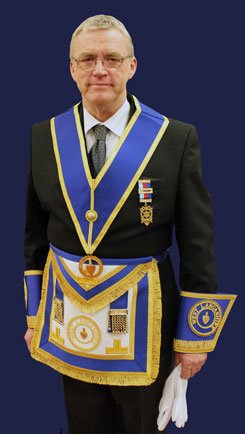 Phil was born in Ulverston, Lancashire as it was then and not Cumbria as it is now on 11 March 1955. He attended St Mary’s Catholic Junior School in Ulverston, then St Aloysius Secondary School in Barrow in Furness.

On leaving school at 16 years old he literally started work the following day at Far Mountbarrow Farm, Ulverston but went on to undertake an apprenticeship as a joiner in the shipyard in Barrow operated by BAE Systems resulting in gaining his City and Guilds qualification.

After 17 Years in the Shipyard he decided he needed a fresh challenge and went from the security of a regular wage into car sales and commission with the Ford dealer in Ulverston. After eight years he changed employer once again to work around the Fylde Area for Chris Allen Garages Ltd as Group Sales Manager which necessitated travelling every day to Garstang and back home to Ulverston.

Five years later in 2002 Phil and Alan Pattinson who is a member of the Craft and Group Webmaster for the Furness and South Lakeland Group, purchased the Peugeot Dealer in Barrow in Furness (Guy Perry Ltd) and are still going strong today.

Phil and Alan are also very proud of the fact that in the last four years the dealership has been awarded Guild of Gold Lion status which is an award for the top 30 Dealers in the country. Indeed the picture with his wife Lynn shows the award which was presented on the Royal Yacht Britannia in Edinburgh.

Phil was initiated into Newby Bridge Lodge No 4598 in the Furness and South Lakeland Group on 12 January 1993 and having served in every office leading to the chair, he became Worshipful Master in 2000, and served as WM for two years, following which he served as almoner for two years and for the last 10 years as DC, a post he will relinquish at the next installation meeting.

He is also the lodge mentor, Royal Arch contact, and the current hall chairman. His first appointment in Provincial Grand Lodge came at the Winter Gardens Blackpool in May 2009 with the rank of Past Provincial Senior Grand Deacon. He was promoted to Past Provincial Junior Grand Warden in 2014. He served as Group Charity Steward for the Furness and South Lakeland Group from 2011 to 2014 and from May 2014 has served as Regional Charity Steward with responsibility for the Furness and South Lakeland, Lancaster and  District, and Preston Groups to 12 May 2016 when he was appointed and invested as Provincial Grand Charity Steward.

Phil was exalted into Thurston Chapter No 2525 on 11 June 2008 and was installed as first principal in September 2013. He is the Current Scribe E of the chapter.

He was appointed to the Acting Rank of PrDGSwdB in April 2015, at the meeting of Provincial Grand Chapter in Southport.

He was Captain of Stewards on 31 July 2014 for the investiture of Tony Harrison as the Provincial Grand Master and Grand Superintendant, a role he says he was very proud and privileged to be appointed to. 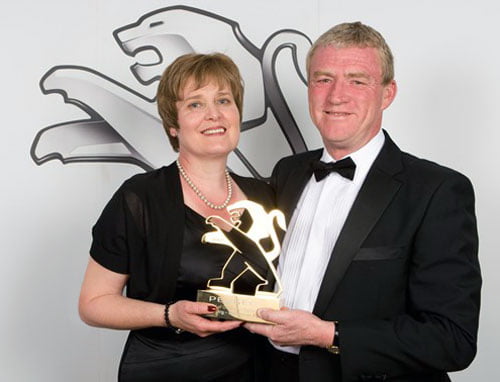 Phil and Lynn as pictured on the Royal Yacht Britannia at the Peugeot awards ceremony where they received Guild of Gold Lion status.

Phil has always being actively involved with his lodge and group in organising various events throughout the years, as examples the FSL Group has now for 10 years supported the Brathay Marathon and has helped them raise over £1,000,000 pounds in that time, to help disadvantaged children.

The Furness and South Lakeland Group organises a concert held in the Coronation Hall, Ulverston, and £1,000s have been donated to local charities, also the Masonic Boxing Tournament now in its 30th year and again has raised many £1,000s for Masonic and non-Masonic causes, both of which Phil has been a prime organiser.

Phil has been married to Lynn for 42 years and they have two daughters: Rachel, and Louise, and their pride and joy are their two grandsons James and Matthew, who Phil when not working or being involved in his Freemasonry tries to spend as much time as possible with.

Phil said after his investiture: “I would like to thank everybody who has mentored me throughout my time as a Freemason. Special thanks must go to David Winder, David Grainger, Phil Gardner, Rowley Saunders and Alan Jones who have all assisted me.

I would also like to thank Lynn and my family for all the support they have given me over the years, and also to Tony Harrison for honouring me with this role.

The next Festival will be on us in 2017 and I am looking forward to working with all the lodge, chapter and Festival representatives, along with all the group and regional charity stewards that we will all rely heavily on to make sure that this Festival will be a happy and beneficial time for the Province and the Masonic Charitable Foundation in particular.”