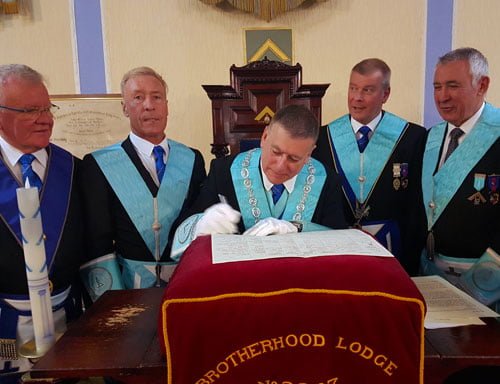 For a number of years there has been informal discussion amongst a number of Masons meeting on the Fylde Coast, lamenting the lack of a military lodge in the area and indeed the Province of West Lancashire. In the summer of 2016, Robert Wareham of Brotherhood Lodge No 3967 decided to gauge interest in forming a new lodge on the Fylde Coast.

An open meeting took place in August of that year at Blackpool Masonic Hall, with attendees from across the Fylde Coast and as far away as Lancaster, including group officers from the three Fylde groups. The numbers attending the meeting and the response from attendees suggested an appetite for such a lodge. A steering committee, including Masons from all three Fylde Coast groups was formed to guide the process of setting up the lodge.

Since that initial meeting, the steering committee has been working out the proposed meeting schedules; procuring lodge equipment and regalia; designing potential lodge crests; securing a sponsoring lodge and writing a business plan for approval by the Provincial Grand Master – with all the required information included. Following the approval of the business plan, a petition form was issued to the steering committee from the Provincial Secretary.

Brotherhood Lodge considered a proposal to approve the petition to form Pro Patria Lodge (the intended name of the new lodge) at its regular meeting in May 2017 at Blackpool Masonic Hall. The lodge voted in favour and the petition was duly signed by the master and wardens in open lodge. Following recognised procedures, the petition has been forwarded to Provincial Grand Lodge for action and if approved, for onward transmission to Grand Lodge for final approval.

The lodge is to be a special interest lodge for Freemasons who are either serving or ex-military members. The proposal has attracted 28 founders and other interested individuals.

If the petition to form the lodge is approved, it will be the first lodge consecrated in West Lancashire for a number of years. The last lodge formed is Radio Millennium Lodge No 9709 which received its warrant from Grand Lodge in 1999 and was consecrated on 4 November 2000. They are also a special interest lodge, being Masons interested in amateur radio.

The lodge will have a registered home at Cleveleys Masonic Hall and will become a North Fylde Group lodge, but with plans to meet by dispensation across the Fylde Coast.