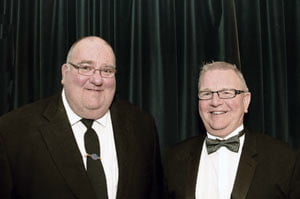 Such is the nature of Freemasonry throughout the Fylde Coast that anyone who has been about for several years will be unlikely to visit a lodge in the area without meeting brethren encountered at previous meetings and events.

It was no surprise to most therefore, that Chairman of Blackpool Group Peter Bentham would arrive at a meeting of Melita Lodge No 6783 for his first ever visit and meet several old friends. He was pleased to receive a very warm welcome from the installing master Roland Alderton and his dad, lodge secretary Tony Alderton, both of whom he had met before. He was also destined to recognise several other familiar faces and renew old acquaintances.

With the lodge business swiftly expedited it was time for the principal guest, Peter Bentham to be welcomed into the lodge. Peter was accompanied by Past Assistant Grand Directors of Ceremonies Colin Moxey and South Fylde Group Chairman Ian Ward, with his vice chairman John Robbie Porter. Provincial Grand Chaplain Rev Canon Godfrey Hirst and several other Provincial grand officers and distinguished brethren were also in support. 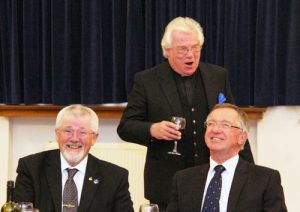 The usual salutations were led by Graham Stott followed by the installing master inviting Geoff Crosland to act as senior warden, Colin Fisher as junior warden and Mike Notman as inner guard. The master elect Derek Ashwood was presented by Tony Alderton and expertly installed into the chair of King Solomon by Roland Alderton. 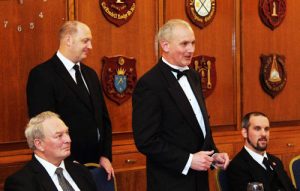 At the conclusion of the ceremony Peter extended the congratulations of the Provincial Grand Master Tony Harrison to the new master. He also assured those present that had Tony been able to attend such an excellent installation he would have been very impressed by Roland Alderton’s splendid ceremony. Peter also heaped praise on Brian Pearson for his unique delivery of the address to the master, which was unsurpassed in his experience.

Derek Ashwood presented cheques on behalf of the brethren to the total of £500, consisting of £200 in aid of the North West Air Ambulance, £200 to the Royal National Lifeboat Institution (Fleetwood Branch) and £100 to Trinity Hospice. Peter thanked the brethren on behalf of the recipients for their generosity and felt sure that the money would be well received and faithfully applied. 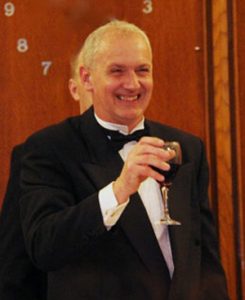 Newly installed master of the lodge Derek Ashwood takes wine with the brethren.

Responding on behalf of the grand officers present, Ian Ward offered warmest congratulations to the new master on attaining the master’s chair of Melita Lodge for a second time. He said that it was a privilege to respond after such an excellent ceremony. Simon Walker, responding on behalf of the Provincial grand officers, offered his congratulations and wished Derek the best of health to enjoy his year in the chair.

Responding to the toast to the grand officers at the festive board, Peter Bentham thanked everyone in the lodge for the warmth of his welcome. He said that he was pleased and surprised to meet so many old friends, particularly Tony and Roland Alderton who he had met some years ago during their installations at Marina Lodge No 6928.

He praised the ‘professionals’ Ian Ward and Godfrey Hirst for their great commitment and for the work that they do. He also complimented guest organist Malcolm Burrell for the breadth and quality of his repertoire. Peter continued by entertaining his audience with several anecdotes from his own early days as a Freemason. 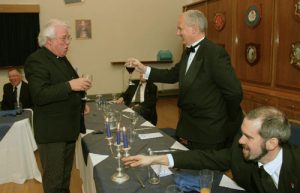 Peter also spoke about St Anne’s Masonic Hall, adding that it was the best it has ever been. He continued by mentioning the forthcoming Charity Giving Days, congratulating the South Fylde Group for their combined donations for 2016 being in excess of £45,000. He was particularly pleased to see that over £20,000 of that sum was to be given to the West Lancashire Freemason’s Charity. He concluded by discussing membership and recruitment, urging the members to work towards securing the future by seeking out new members.

In proposing the toast to the master, Roland Alderton praised the master for being prepared to pick up the gauntlet for the second time in Melita Lodge. He wished him the best of health and handed over to Godfrey to sing a rousing master’s song, with Malcolm at the piano. In conclusion Godfrey added that it was a delight to sing for the new master, offering him the blessing of heaven to aid him in the year ahead.

In response, Derek thanked Roland for a fine ceremony of installation. He told the brethren that he was very pleased to take the chair of the lodge for the second time and that he was particularly honoured to present charity cheques to such worthy causes. He thanked the brothers who had taken office and also thanked everyone for their support and attendance. A ‘Westhoughton’ raffle raised £87 for charity and proceedings were brought to a close by Tony Alderton who delivered the tyler’s toast.