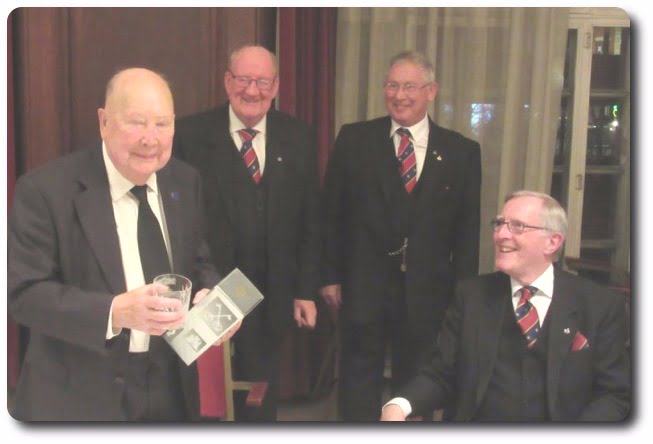 On Wednesday April 6th, Bridge St was the venue for a special evening when the Brethren and guests got together at Ashbury Lodge No.1459 to celebrate the 50 years in Freemasonry of WBro George Parker.

After the lodge had been duly opened by the Worshipful Master, there was a report, upon which the Director of Ceremonies, announced that the Assistant Provincial Grand Master for the Manchester Area, WBro Christopher Welton, PJGD, was outside the door of the Lodge and demanded admission.

After welcoming the Assistant Provincial Grand Master, the Worshipful Master offered WBro Welton the gavel which he was pleased to accept.

He also brought greetings from the RW PGM Sir David Trippier and VWBro Derek Nelson Thornhill, DepPGM both of whom sent their best wishes to everyone and personal congratulations to WBro Parker.

The Director of Ceremonies was asked to please place WBro Parker on the Centre.

As is customary at Lodge celebrations, WBro Welton listed some facts from 1931, the year that George was born, such as King George V being the reigning monarch and Ramsey McDonald being Prime Minister first with a Labour Government and then a National Government. The average house price was £600. There were several notable events that occurred in 1931, the Highway Code first came into existence, Whipsnade Zoo opened as did the Empire State Building in New York. There was a mutiny in the Royal Navy that year at Invergordon due to decreased salaries. Inventions in 1931 included the Electric Razor, Nylon and the Aerosol Can. Alka Seltzers were also first used that year.

Well-known names born in 1931 included Les Dawson, Lonnie Donegan, John Le Carre, Boris Yeltsin and, for the Trekkies amongst you, both William Shatner and Leonard Nimoy. Rupert Murdoch shares the same birth year as George. Amongst the ladies born that year were Anne Bancroft, Angie Dickinson and Diana Dors.

George was Initiated into Freemasonry on 6th April 1966, Provincial Honours in the Craft came along and in 1986 he was made PProvAsstGSuptWks promotions then followed to PProvJGD and PProvDepGSuptWks.

1966, the year of George’s Initiation, proved to be quite a very momentous year, not just because George joined Freemasonry but in that year Harold Wilson was P.M. and our current Queen, Elizabeth II, was on the Throne. The average house price had now risen to £3840 and petrol cost the equivalent of 24 pence a gallon

In 1966 British Rail began the Electrification of the West Coast line between Euston and Manchester. In that year Jim Callaghan, the Chancellor of the Exchequer, announced the decision to embrace decimalisation effective from 15th February 1971.

Born in 1966, Chris Evans, Samantha Fox, David Cameron, Jeremy Hunt and Zola Budd…not forgetting that England won something and a trophy was lost!!

An extract of the minutes was then read by the Lodge Secretary and then WBro Kerfoot delivered the tribute to George which can be downloaded HERE:

Bro Welton then performed a very pleasant duty and that was to read out and present to WBro Parker a special Certificate and accompanying letter and then the DC escorted WBro Parker around the Lodge to the acclamation of the Brethren.

To finish off this special evening, WBro Evans was presented with a 50th Anniversary pin by WBro David Hudson, District Chairman, City Derby.

WBro Welton, together with WBro Parker withdrew from the lodge in Masonic order. The Worshipful Master closed the lodge and all the brethren retired to the social board. 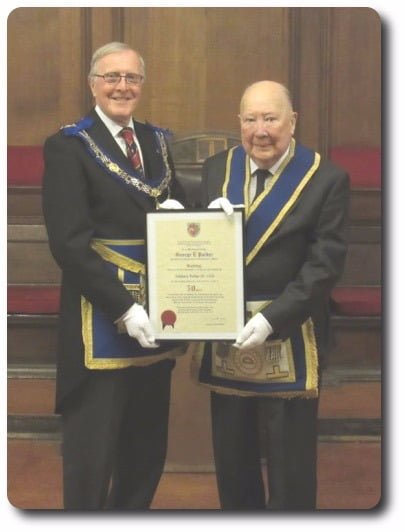 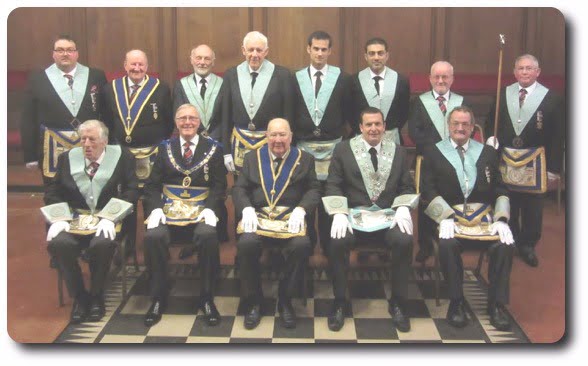 WBro Parker with the APGM and Lodge Members