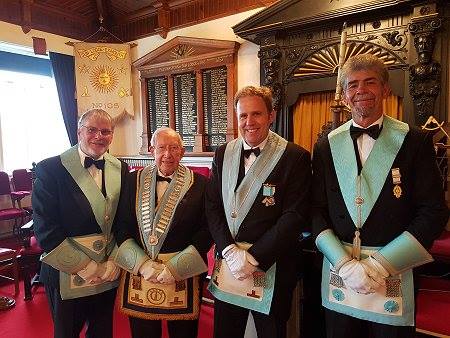 Per Mare Per Terram Lodge No. 9355 shows that age is no problem!

W.Bro. George Tumbridge joined the Home Guard at the age of 16 and in 1942 he was called into the Army and was posted to the Royal Armoured Corps as a Driver/Signals Operator. In 1944 he volunteered to join the 6th Airborne Armoured Regiment, and trained on light tanks to be transported in Gliders.

In 1945 he crossed the River Rhine in Germany, but his Tank was damaged on landing. He was transferred to a Scout Car and continued on to the Baltic Coast where he met up with the Russians. A few weeks later the war was over, but George does not take all the credit for that!

In 2006 he again moved to Exmouth and re-joined our Lodge. In 2014 he stood in for one meeting as SD. In June 2014 was appointed SD, then SW, and now today at 91 years and 8 months is being installed as Master. He is looking forward to a successful year and subsequent appointments as IPM and Tyler.