It was an installation tinged with sadness at Peace and Pemberton Chapter No 4686. The chapter was honoured and delighted to receive Assistant to the Provincial Grand Principals Ian Cuerden as the principal guest, on this special occasion at Pemberton Masonic Hall.

It was almost as though fate wanted to prevent this meeting taking place. Pemberton Masonic Hall is situated near to the main M6 arterial route, making it, under normal circumstances, a very accessible venue.

An incident in the afternoon however, had closed the southbound motorway causing an initial gridlock followed by absolute chaos and severe congestion on the surrounding roads.

The decision was made to put the start of the meeting back to allow attendees the extra time needed, including the principal guest, who arrived just in the nick of time. 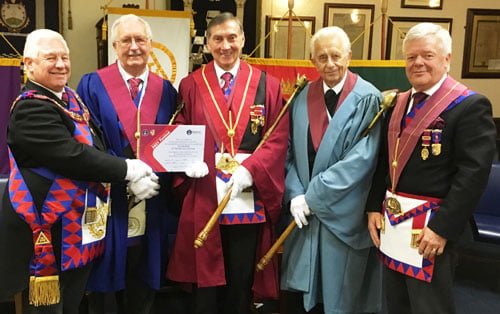 The chapter was eventually opened for business by first principal Corrie Wilson-MacCormack, Derek Ishmael as second principal and Brian Fairclough as third principal, for what was to be the very last time. The chapter had been struggling for a number of years, but bravely kept going until it eventually became totally impractical to carry on. The laboured decision was made to hand in their charters, and tonight was the night that it was to happen.

Before that final business was to take place, there was something much more pleasant. Corrie was proud to present a charitable donation to West Lancashire Freemasons’ Charity for £369, £1,000 to Pemberton Masonic Properties and £650 in favour of the MCF 2021 Festival.

The donations were a fine parting shot by the companions of the chapter, especially that to the MCF 2021 Festival, which, much to the delight of Chris Reeman, Wigan Group Charity Steward, qualified the chapter for Vice Patronage.

Some of the companions and guests present to say a sad farewell.